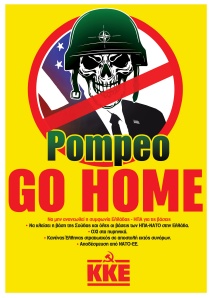 The KKE calls on workers, the people and the youth to rise against the visit of the US Secretary of State, M. Pompeo, and above all against the conversion of Greece into a vast US-NATO base. This is also the content of the “Strategic Dialogue” with the US, initiated by the former SYRIZA government in Phase I and enhanced by the ND government with the current Phase II.

The KKE calls for uprising and mass participation in the mobilizations of the anti-war and anti-imperialist movement against the visit of the US Secretary of State, which will take place throughout the country. It calls for support for the multi-faceted actions in order for the US-NATO bases in Greece to close down and our country to disentangle from the dangerous imperialist plans and competitions.

The “Mutual Defence Cooperation Agreement”, which has already been prepared behind the people’s back and is expected to be signed during the visit of the US Secretary of State, Pompeo, to Athens, further engages our country and our people at great risks.

It prepares to turn“once and for all” more than half of Greece to a murderous base for the US-NATO and their plans, from the Balkans and the Black Sea to the Eastern Mediterranean and the Persian Gulf, and make our people a target of imperialist competitions raging all over the region to share the loot in Energy, its transportation routes and the spheres of influence.

The ND government, in the framework of the “Strategic Dialogue” with the US, initiated by the SYRIZA government, proceeds to a multiyear or permanent renewal of the Greek-US Agreement on military bases, its enhancement and expansion.

The claims by the government and the Euro-Atlantic parties that Greece’s attachment to the imperialist chariot of NATO, the US and the EU ensures peace and security in the region are unfounded and unhistorical.

Their bases are not built to protect the country and the borders, but to serve as bases for war and interventions, to protect the interests of energy giants.

This is what the US Ambassador, G. Pyatt, means when he repeatedly states that Greece is a “geopolitical hinge” and a “frontline state” for the US. That is:

The entanglement in these plans will turn Greece into a “magnet” for potential attacks. Our country has already been targeted. The Russian and Iranian officials’ statements saying that in case their countries are threatened, they will turn their missiles against the countries hosting US bases, are characteristic.

Equally unfounded and unhistorical are the claims that in this way our country is protected from Turkish aggression. Turkey, as a NATO force,escalates aggression in the Aegean and Eastern Mediterranean, calling into question and violating borders.

The participation of our country in NATO and the EU over the years, the presence of NATO bases in Greece not only did not prevent, but on the contrary,sharpened Turkish aggression. NATO recognizes no borders in the Aegean, which considers to be a single business space. It plays the role of “Pontius Pilate” in the Greek-Turkish disputes. Besides, the promotion of partition and co-exploitation of mineral wealth plans in Cyprus and the Aegean is promoted under the auspices of NATO, the US and the EU.

No matter how many lies they tell about the alleged“benefits” that the Greek people will have, this is the essence and it cannot be concealed;the only “exchanges” are the ones that the bourgeoisie expects for its upgrading, while for the people the price is even greater risks due to their plans, with peoples been the victims, and that means new wars, poverty, uprooted people from their homelands. The only winners will be those parts of the capital that will benefit from energy and other business partnerships, which among others,hand the country’s public wealth to domestic and foreign business interests.

The KKE firmly defends the people’s interests, works for the development of the joint struggle of the peoples, for mutual, beneficial cooperation, and demands:

These developments require vigilance and action. They must sound an alarm, a real uprising. With even greater intensity, even more people must join the struggle to inform, to mobilize. The already thousands of signatures collected after the call of the Struggle Committee against the Bases Agreement must be multiplied. Even more organizations and trade unions must be engaged into the success of the rallies that will be held during the visit of the US Secretary of State to Greece for the second round of the “Strategic Dialogue”.

Let the message “No land, no water for the murderers of the peoples” be loudly heard everywhere.

Final Statement of the 14th Meeting of IMCWP – Beirut Declaration