As time passes by, the saying that the world is more insecure whenever the UN Security Council is holding a meeting is more and more a reality.

The recent agreement forbidding a sovereign and independent state to go ahead with its plans to develop a capacity to use nuclear energy for peaceful objectives is simply a confirmation of this assertion.

Never mind the fact that experts from the International Atomic Energy Agency (IAEA), have corroborated the peaceful aim of Iranian nuclear project, evidently the purpose is to force a country with large oil resources to consume it instead of keeping it as a reserve. Times will come when those who have squandered their large assets will need to depend on others who have properly protected and guarded their resources.

This agreement is also disgraceful because the Security Council has never condemned the employ of nuclear means by Israel, not based on peaceful aspirations but to turn out to be the fourth nuclear world power. Neither did it recently condemn timely the aggression against a small, defenseless, peaceful country such as Lebanon.

Nor did this Security Council acknowledge how Israelis provided South Africa the times of Apartheid a number of nuclear bombs.

It is for these reasons that we urgently call on all Peace fighters and all other persons capable of foreseeing the dangers represented by atomic armaments, when more that five thousands of them are in the arsenals of the only nuclear power that has ever made use of such weaponry against two defenseless cities: Hiroshima and Nagasaki.

Could this be the prelude of a similar campaign as the one used to attack Iraq?

We agree with the reafirmation made by the Representative of the Non-Aligned Countries Movement in the UNO, when he backed “the fundamental and inalienable right of all States to research, produce and use atomic energy with peaceful purposes, without discrimination and in conformity with its juridical obligations.” 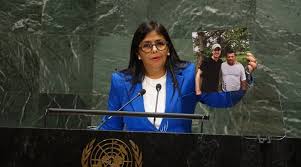