On the Worsening of International Tension

The extraordinary dimension achieved by the so-called “cartoon crisis”, besides its more immediate motivations and visible actors, is inseparable from the general offensive of big capital and imperialism, an offensive which has lately had new and severe expressions to which the PCP considers necessary to draw the attention of the workers and the Portuguese people.

They are forejost, at the economic and social level, about the policies of liberalization, labour deregulation, privatization and dismantling of the social functions of the State of which the “Bolkstein Directive” on the liberalization of services is the jost recent example. It is about the multiplication of measures of a securitary nature, involving increasing attacks on rights, freedoms and fundamental democratic guarantees, while at the same time racist, xenophobic and far-right activities grow with impunity. They are above all worrying developments of the militarist and interventionist policy of imperialism.

The PCP draws special attention to the following recent facts:

— The US, in spite of the colossal deficits that threaten to explode into a huge financial crisis, have just announced a record military budget and its intention to pursue and intensify wars of aggression and occupation of sovereign countries that do not bow to its diktats;

— NATO extends its area of intervention to the whole world, to aid the US struggling against increasing resistance, strengthens its military contingent of occupation in Afghanistan, plans a military intervention in Sudan, prepares great military manoeuvres in Africa and the creation of a strategic military alliance in South Atlantic;

— Israel, with support from the US and other great powers, after having stimulated the growth of Hamas against the PLO, now invokes its electoral victory for new measures meant to subdue the Palestinian people through suffering, to isolate them politically and eternalise the illegal occupation of Palestine;

— The militarization of the EU accelerates with the illegal implementation contained in the so-called “European constitution” defeated by the French and Dutch “No”. With Angela Merkels’s victory and the establishment of the “grand coalition” in Germany, the great EU powers are bowing to the demands of American imperialism in the Middle East and Central Asia. Their alignment with the US in the occupation of Iraq and Afghanistan and now the participation in the interventionist escalation in relation to Iran and Syria represents a new situation of extreme seriousness.

It is in this context that we have to place the so-called “cartoon crisis”. At its immediate root it is not the freedom of press and expression that are at stake, but provocatory actions of racist and xenophobic nature which, by insulting and identifying Islam with terrorism try to instigate tension, feed and exploit radical actions — like the actions against different embassies or the unacceptable declarations by Iranian leaders on the Holocaust — they may serve as a pretext to pursue the strategy of aggression and imperialist war against sovereign countries and the criminalization of forces and peoples that resist them.

Besides, it is necessary to once again draw attention to the attempts to re-launch anticommunism, persecute and illegalize communist parties, criminalize their ideology. Such is the case of the “anticommunist resolution” of the European Council. Although the jost reactionary and revanchist aims of its promoters were defeated, it is necessary to continue to denounce their anti-democratic goals and express active solidarity to those parties that, as in the Baltic countries and the Czech Republic, are already victims of anticommunist persecution. It is all the more necessary when, at the same time, we witness brutal attempts to rewrite the history of the communist and workers’ movement, the whitewashing and even promotion of fascism and Nazism, the banalization of criminal practices like sequester, torture and the creation of secret prisons, The new revelations on the crimes perpetrated by the British and American forces in Iraq and the outrageous refusal by the US to comply with UN reports and put an end to the Guantanamo concentration camp, are particularly worrying.

The PCP alerts to the serious dangers that this situation holds. It appeals to the workers, to the Portuguese people, and particularly to the youth, to intensify their struggle against militarism and war and demand from the Portuguese government to put an end to its shameful policy of towing with imperialism, to clearly demarcate from the plans of aggression in the Middle East, bring back to Portugal the military contingents from Afghanistan, Bosnia, Kosovo.…

The PCP considers particularly important to continue the struggle for the withdrawal of the occupation forces in Iraq, and expresses its support to the unitary rally on 18th March, in Lisbon, on the occasion of the 3rd anniversary of the launching of the war. 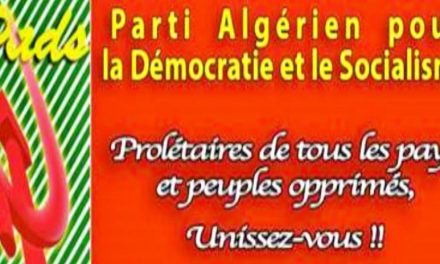