In order to preserve democratic appearances, power brokers may limit repression to intimidation and creating divisions within dissident ranks. Surely, those targeted with the threat or reality of jail time, or cowed by abusive, free-wheeling investigations do remember. Yet activists who are spared or members of the general public either never knew, or may forget.

The purpose here is thus to recall two recent episodes of serious repression, also to outline relevant mechanisms, particularly the use of jail time and police investigations to promote fear and divisions. These tools and objectives were features of both scenarios.

Ricardo Palmera is both prisoner of war and political prisoner. Since his extradition to the United States from Colombia in late 2004, Palmera, known also as Simon Trinidad, has been held in solitary confinement in a high security federal prison, not allowed to receive letters or communicate with his lawyer. His first trial, in 2006, ended in a hung jury. PalmeraÂs second trial, initially delayed due to judicial cheating, eventually ended with his conviction on the single charge of membership in the leftist Revolutionary Armed Forces of Colombia (FARC).Â  That tagged him as a terrorist. HeÂs serving a 60 year sentence.Â  His two other U.S. trials on drug trafficking charges ended in a mistrial and a hung jury. Â

Palmera had served the FARC as contact person with foreign agencies and diplomats engaged in promoting a negotiated settlement of civil war in Colombia. He was meeting with a UN official at the time of his CIA- assisted capture in Ecuador in January, 2004.

PalmeraÂs fate was surely intended as an object lesson for leftist guerrillas anywhere. Those in Colombia were on notice to steer clear of negotiations leading to a peace agreement.Â  Prison abuse heaped on Palmera contributes to intimidation. And harsh U.S. treatment of an armed revolutionary combatant puts pressure on all revolutionaries, especially those professing non-violence, to demonstrate, even show off, their dedication to peace and dialogue, in the process possibly alienating their allies in struggle.

In tandem with the case of Ricardo Palmera, advocates for Colombian justice condemn U.S. treatment of FARC leader Anayibe Rojas Valderama, known also as ÂSonia.ÂÂ  Extradited to the United States, she received a 17 year jail sentence for trafficking in cocaine, an accusation she denies

The wave of FBI investigations last year in several Midwestern cities exemplify a more nuanced approach to instilling fear and division than locking up opposition figures. Beginning in September, FBI agents took to barging into activistsÂ homes and confiscating documents, literature, passports, computer files, and personal memorabilia. So far, 23 victims, labor activists among them, have been subpoenaed to testify at grand jury hearings. All have refused. Indictments are rumored.

Many of those targeted organized solidarity efforts on behalf of the Palestinian and Colombian peoples. Several traveled to those regions. A few participated in demonstrations at the 2008 Republican convention in St Paul, Minnesota, marked by an outsized police presence. According to the New York Times, FBI actions are in line with recently expanded powers Âallowing agents to look into people and organizations ÂproactivelyÂ and without firm evidence for suspecting criminal or terrorist activity.Â For the government, schooling the activist community into caution and second guessing is an important objective.Â Â  Â

Because several of those whose homes were entered belong to small, leftist political groupings, activists with other ideological bearings may remain at a distance. Their assumption might be that the protestersÂ confrontational behavior had provoked governmental action. That feeds into disunity.

Search warrants used by the intrusive FBI functionaries referred to possible Âmaterial supportÂ alleged to have been provided to Palestinian and Colombian groups viewed as terrorist. The anti- terrorist witch hunt recalls former and even current red scare thinking. Such hysteria prevails particularly in Colombia, where 7500 political prisoners languish in jails.

U.S. brandishing of the terrorist label is revealing. War on terrorism now serves as pretext for U.S. military actions throughout most of the world. Anti Â war activism within the United States and worldwide resistance to U.S. imperialism are likely to set off U.S. anti Â terror machinery. ThatÂs what happened to the victims of FBI raids who were confronting U.S. imperialism.Â  ItÂs no great exaggeration to say that military combatants anywhere who violate U.S. rules and carry a terrorist label have a jail cell waiting for them in the United States, at least according to the court convicting Ricardo Palmera.

Abusive FBI investigations entered a new dimension in May with the ransacking of the Los Angeles home of Carlos Montes, cofounder of the Black Berets organization that several decades ago mounted anti-war, anti racism mobilization on behalf of Chicanos. In league with local police, the FBI confiscated reams of documents and personal items. Montes was jailed briefly on charges relating to firearms possession. Subsequent court hearings have prompted solidarity demonstrations at the Los Angeles court house and in multiple U.S. cities.

A news report covering a recent Los Angeles demonstration cites an organizer for the Southern California Immigration Coalition.Â  Ron Gochez condemns persecution of Montes as directed against the immigrant rights movement itself.Â  "We will not be silent. We will not let them criminalize us,Â he said.

If such is the case, unrestrained police investigations and the threat of jail time are being utilized to intimidate, divide, and certainly to impede organizing efforts among cross border workers. That harks back to deadly fallout from the Cointelpro offensive against the Black liberation movement.


Your letters to Ricardo Palmera and Sonya expressing solidarity, friendship, and concern would go a long way toward telling them they are not alone. While prison authorities have not been in the habit of delivering letters to the two prisoners, their receipt of letters serves to remind them too that the prisoners have friends. And if enough arrive, maybe they will be delivered. The prisonersÂ addresses are: 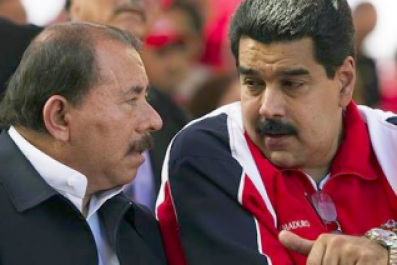