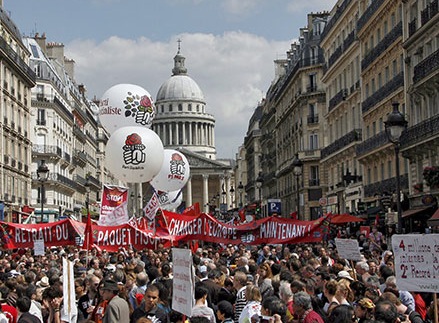 May Day in Paris did not shut down the city – as it did in Istanbul – or result in pitched battles between the demonstrators and the police – as in Berlin, but it created a big impression nonetheless.

First, it was huge. Under a bright blue sky and balmy weather – 160,000 festive participants in Paris (1.2 million nationwide) streamed down Boulevard St. Michel and Boulevard St. Germaine, all afternoon until well into the evening. Though the organizers said the turnout was not so great as the anti-government demonstrations in January and March, it was nonetheless very large indeed, larger than any recent May Day, and nationwide five times larger than the turnout last year.

Second, the economic crisis and the neoliberal policies of French President Nikolas Sarkozy produced an unaccustomed unity. For the first time since 1948, all of the unions united on this May Day. The unity was reflected in the two most commonly seen slogans ubiquitous on stickers, signs and t-shirts. The first was “Reve General,” a play on words referring both to General Dream (Reve) and General Strike (Greve). The second slogan was a repetition of the foul language that President Sarkozy used at an agricultural exposition, when a farmer refused to shake his hand. This time the demonstrators threw Sarkozy’s words back at him: “Casse toi, pov’ con,” which could be loosely translated as “F… you, you lousy c…” Another sign of unity, was the omnipresence of the signs and literature of the “Front de Gauche,” the electoral coalition for the June 7 European elections, composed of the French Communist Party, defectors from the French Socialist Party, the Anti-Capitalist Party and others.

A context of sharpening class struggle marked this May Day. In the weeks preceding it, three major strikes and a number of minor ones were under way, notably those at Molex in Toulouse, Continental in Compiegne, and Caterpillar in Grenoble. Some strikers had taken their managers hostage. Over a thousand workers at Continental traveled to Germany for a solidarity meeting with German Continental workers. In the week preceding May Day, doctors and other health workers, researchers and university teachers had demonstrated, many for the first time in their lives, against Sarkozy’s plan to privatize health care and impose neoliberal management ideas on the universities.

Most remarkable of all, the unity and militancy of May Day appeared to be just the beginning of things to come. The leaders of the trade unions announced that May 1 was just the first stage of struggle and that they would meet the following Monday to plan further actions. With each passing day, the General Strike was becoming less of a dream and more of a reality.

Professor Roger Keeran is a US labor historian and author.

May Day in the US had an immigrant worker rights theme.

Below are photos from Los Angeles and Vermont.