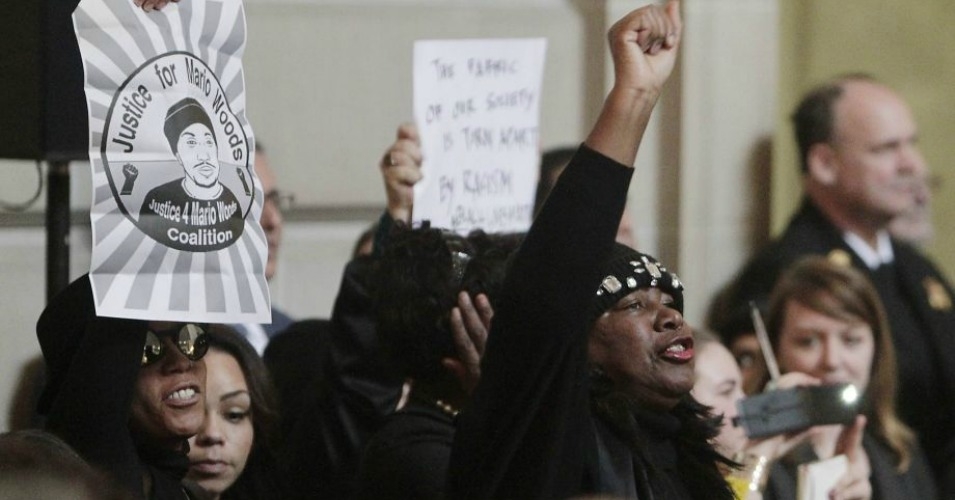 Thanks to the ubiquity of cell-phone cameras, police racism is now apparent to even the most disinterested citizen. The recorded police murders of African Americans at work, in their cars, committing minor traffic violations, or at leisure, are widely known.

The unwarranted shootings of unarmed African American youth, women, elderly, or the impaired, have been seen via the media by nearly everyone. There is no longer much public denial of the existence of police violence against Black people. There remains, however, a continuing debate on the extent of the violence, its causes, and its meaning.

At one pole are the apologists. Apart from the blatant racists who salute the violence, deniers argue that the incidents are rare or that the violence is only the result of a few “bad apples.” The emerging facts belie the belief that police violence is uncommon.

And the “bad apple” metaphor collapses in the face of the insular solidarity of virtually all police forces; “professional” law enforcement and its political overseers refuse to professionally discard the “bad apples.” If the supposed “good” cops will not step up to repudiate the racists, they are racists, too.

In profound opposition to the apologists are the Marxists, who see the police as a structure or institution that is inseparably bound up with service to those who rule. Yes, police serve and protect, but primarily they serve and protect the propertied class and its interests. The reason “protect and serve” rings so hollow to minorities, trade unionists, and other groups is that the police are a part of a larger criminal justice system devised solely to keep order for wealth and power.

Police violence, to the Marxist, is not personal, random, or pathological, but systemic. As a corollary, racist police violence serves to contain a group that has historically challenged power and authority. African American resistance to New World ruling classes begins with the subjugation of Africans, their forced departure from their homelands, and their enslavement as laborers. African Americans fought unsuccessfully to hold onto the gains of Reconstruction, fought against inequities of segregation, struggled for voting rights, for economic and for social rights, and have been in the vanguard of virtually every broad-based US struggle for justice.

It is for these reasons that the African American people have suffered a special, targeted relationship with the protectors of ruling-class interests– the police. The mass insurrections that have frequently erupted in recent decades have spurred the police to serve as a veritable occupying army in Black neighborhoods.

“Just the Facts…”Of course the Marxist charge of systemic police violence and abuse is not an easy pill for many people to swallow, particularly if they live in communities distant from or walled off from urban neighborhoods where the police concentrate their violence. So, facts are needed.

For this, we turn to an unlikely source: a lengthy essay/book review by a conservative academic in The Wall Street Journal. Professor Edward P. Stringham (Is America Facing a Police Crisis?, July 30-31, 2016) notes that opinion polls show that confidence in police is at a 20-year low “among Americans of all ages, education levels, incomes, and races…,” but is even lower for African Americans. All citizens agree overwhelmingly that police should wear body cameras. Such is the general mistrust in police credibility.

To give perspective to the “crisis,” Stringham offers the vital statistics on police killing and police killed. He cites a “victimization” rate of police officers, thought to be risking their lives protecting us, as 4.6 deaths per 100,000 officers. But the “average American faces a nearly identical homicide rate of 4.5 per 100,000 and the average male actually faces a homicide rate of 6.6 per 100,000.”

So much for the notion that “protecting” the public is more dangerous than being “protected” by the police. By contrast, the police kill “134 [disproportionately Black] Americans per 100,000 officers, a rate 30 times the homicide rate overall. Police represent about 1 out of 360 members of the population, but commit 1 out of 12 of all killings in the United States….

In England and Germany, where the police represent a similar percentage of the population as in the US, they commit less than one-half of 1% of all killings.” Any argument that explains police killing civilians as a response to the dangers incurred in police work falls before the facts. Stringham goes on to explain that police killings cannot be justified because of a rising crime rate or conversely as the deterrent responsible for the drop in crime.

So, police killings are not a defensive reaction to rising crime. But neither is the recent drop in crime a reaction to the draconian crime-prevention schemes of the last few decades (zero-tolerance, militarization, mass incarceration). The Canadian criminal justice system experienced virtually the same drop in crime without resorting to any of the medieval tactics served up by the US ruling class.

Thus, police violence is neither justified as a response to rising crime, nor a cause of the drop in crime in the US. Further, it is not only physical violence that epitomizes the US criminal justice system, but also mass incarceration (again, inordinately afflicting African-Americans).

Today, the US leads the world in per capita criminalization of its citizens, jailing at a rate seven times greater than in 1965. Professor Stringham also points out that New York incarcerated 48 citizens per 100,000 in 1865; now, New York imprisons 265 people per 100,000. It is hardly credible that New Yorkers now pose a threat to society today more than five times greater than 150 years earlier.

The intensification of police repression is not inexplicable, but is coincident with political policy. The Johnson-era Omnibus crime bill of 1968 that expanded and funded policing, militarization, and surveillance, was clearly a reaction to the mass actions and insurrections of the 1960s.

Currently, police departments receive $1.6 billion per annum for military equipment from the Department of Homeland Security.

Swat teams– the special ops of the militarized police– now conduct 50,000 raids per year. As Glen Ford recently reported in Black Agenda Report, the Obama Administration has nearly tripled the annual direct military transfer of weaponry from the Pentagon to the police since 2010.

And to what purpose?

The militarization of the police in the US, a process that accelerated from the late 1960s to today, coincides with the intense concentration of wealth for the rich, the stagnation and deterioration of living standards for the rest, and the stripping of personal rights in the United States.

The authorities justify police aggression on the basis of contrived wars on crime, drugs, and terrorism. They stoke fears to rally support for the arming of the forces of counter-insurgency against an increasingly angry populace. Because of their historical militancy, African Americans have been subjected to the brunt of militarized police violence. The suppression of Black youth is the particular focus of law enforcement, a testament to the group’s revolutionary potential.

The devaluation of African American lives and their arbitrary murder are part of the ruling-class campaign to intimidate. The police are the agents of the campaign.

War on the Horizon?