The Secretary of State’s candid remarks remind us that US foreign policy is intended to punish those targeted as enemies, keep friends as vassal states, and disregard international law

It is rare for an enemy to give a gift the way Secretary of State Mike Pompeo did in a recent public speech . Pompeo said what anyone who has ever paid attention already knew. The intelligence agencies of the United States government are masters of deception and one should always assume that they are lying, cheating, and or stealing.

When they say that a foreign leader is a “brutal dictator” the charge proves just one thing. The person in question is being targeted by the United States. The individual labeled a dictator is said to rule over people who want the U.S. to drop bombs on them or destroy their economy with sanctions.  But as Pompeo pointed out, the spooks and other deep state functionaries are always lying.

It is all to the good that Pompeo is too stupid to keep his mouth shut. In spilling the beans he made the definitive case for opposing U.S. foreign policy dictates. It is especially fortuitous that Pompeo contracted foot in mouth disease at this moment in history.  For those foolish enough to believe that this country has the right to decide who runs Venezuela or Cuba or Iran or Syria or Haiti, Pompeo’s words ought to ring in their ears.

But Pompeo did more than confess to the ongoing crimes that always take place in broad daylight. Having realized that he had said too much he fell back on the evils of American exceptionalism as a defense. “The glory of the American experiment” is a typical call to savagery that resonates with millions of people. Many atrocities have been justified with such infantile and horrific calls to patriotism.

Pompeo is the ugliest American, boasting and gloating about his plans to make millions of people suffer all over the world. He brags about starving Iranians with sanctions. “Iran’s leaders must decide if they want their people to eat,” is but one example. Starving Iranians and denying them medicine is collective punishment, a war crime by definition. That is also a glory of the American experiment.

It was already obvious that Pompeo is not the sharpest knife in the drawer. But this stupidity cannot be laughed at or taken lightly. Pompeo really believed that the U.S. could easily remove Nicolas Maduro from the Venezuelan presidency. For now all he can do is make life miserable for Venezuelans. Likewise there will be no regime change in Iran. This long held fantasy is dangerous for many reasons. But now we know that Pompeo really believes what he has been selling. He thinks the U.S. can make war on a nation that is allied with China and Russia without paying a price.

The Secretary of State and his partner in crime, National Security Adviser John Bolton, are on a rampage trying to maintain an empire that is still very dangerous yet in a period of decline. United States foreign policy decisions were always intended to punish those targeted as enemies, keep friends as vassal states, and disregard international law. Now it is doing so as its power is on the wane, and more overreach as in Venezuela, is the result.

But Pompeo’s revelation was important for another reason. The so-called resistance have experienced a love fest with these same intelligence agencies that wreak havoc throughout the world. In the upside down post-Donald Trump world, desperate and uninformed Democrats happily made common cause with anyone who they were told opposed him, even if that meant applauding the American gangster state. In so doing they are just as deceptive and dangerous.

Former CIA directors are now regular guests on CNN and MSNBC. The “resistance” lap up their every word in hopes of hearing something that will send Trump packing. No matter which administration they served, they all are just as Pompeo described them. The Bush CIA was no different than the Obama CIA which behaved just as the Trump iteration does. The people who so foolishly cling to fantasy should listen to what Pompeo said. As the old saying goes, we must always believe people when they tell us who they are.

Pompeo’s speech was entitled, “Why Diplomacy Matters.” But he couldn’t help himself and blurted out that diplomacy is of no importance to the United States. Pompeo didn’t tell the truth until he admitted how often he lies. 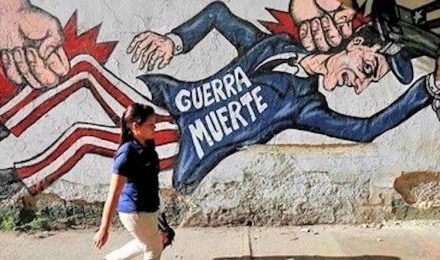