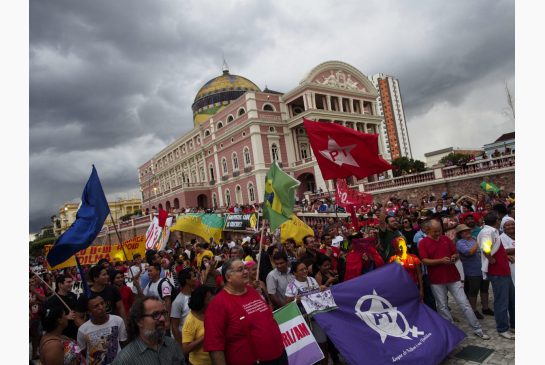 On the coup against the President of Brazil, Dilma Rousseff

The President of Brazil, Dilma Rousseff, has just been removed from the functions to which she was elected by 54 million Brazilians.

The decision of the Brazilian Senate culminates a process of a truly institutional coup. It is not about the removal from high office of a person who committed a crime that could justify removal.

On the contrary. This is a major operation by big Brazilian business to undermine the process of social change and sovereign affirmation, started with Lula da Silva’s Presidency in January 2003, and roll back the advances which were implemented, using the majority in State institutions and the economic problems brought about by capitalism’s crisis.

A process that, at the same time, represents a revenge against Dilma for refusing to yield to blackmail and provide cover to the then President of the Chamber of Deputies, Eduardo Cunha and other elements charged in the “Lava Jato” case [a money-laundering and bribery scheme involving the state-owned oil company by some of the same corrupt officials who forced Rousseff’s removal], and a political revenge for the defeat imposed on the candidate of  reaction in the presidential elections of October 2014.

The removal of President Dilma Rousseff creates in Brazil a complex and dangerous situation. All the more so when the now- consummated coup is part of a broader offensive by US imperialism and Latin American oligarchies aiming to recover lost positions, defeat the progressive processes in countries like Venezuela, Bolivia, Ecuador, Nicaragua, destroy advances of anti-imperialist solidary integration that are taking place all over South America and the Caribbean.

The struggle of the workers and Brazilian popular masses against the coup process will continue and will spread in view of the anti-democratic, anti-popular  policies of yielding to imperailism pursued  by the reactionary government of the usurper Michel Temer. The great demonstrations held yesterday in São Paulo and other Brazilian cities prove that the putschists will face a strong popular resistance.

At this crossroads faced by Brazil, the PCP confirms its solidarity with the communists and other democratic, patriotic and progressive Brazilian forces and reiterates its confidence that the people of this great country will defeat the most dangerous projects of the putschist reaction and pursue the path of political, economic and social changes that the Brazilian society demands.

The Situation in Ireland

For a Return to the CPUSA’s Antiwar Principles