The Communist Party USA offers the best political hope for working people in this country. At a time of great change in the United States, the CPUSA has the experience and history to lead important struggles. With these opportunities come significant questions for our party. The decisions, tactics and conclusions offered by party leadership over the last couple of years demand examination. We believe that our party is at a crossroads and we must make major changes in ideology and practice in order to end years of stagnation and dwindling membership.

Alignment with the Democratic Party
Although most progressives were thrilled with the election of President Barack Obama, the first African-American President of this country, we must make a realistic assessment of this achievement.

President Obama’s election marks a departure from the direction of the extreme right. However, in no way can it be considered a qualitative change in the direction of our government and nation. Obama is a Democrat, and as such, will continue to represent the interests of the wealthy elite. Many policies antithetical to the interests of working people have been continued, including the wars in Iraq and Afghanistan. By not acknowledging these facts, the Party leadership appears to be forsaking its historic role as an unremitting fighter for jobs, equality, peace, not to mention its role in championing socialism.

The fight against the ultra right
Although the ultra right-wing in U.S. Politics remains a threat, its existence cannot justify silence in the face of the Obama administration’s errors that harm working class interests. Party leadership has failed to assertively speak out against the White House’s erroneous, pro-big-business policies at a time when history requires we do so.

We need to work tirelessly to put together the coalitions necessary to build mass movements to respond to the destructive nature of the ultra-right and capitalism. The fight is not over. It has barely started.

DAY-TO-DAY OPERATION OF THE PARTY

The need for organization and discipline
We have been concerned about the lack of organizational effort on the part of CPUSA leadership. In Houston, we have received very few names of individuals in the area interested in the party. We have been very vocal about this and were told by leadership to "stop agitating" about this issue.

This low number of contacts leads to two possible conclusions. One would be the party is not attracting people with its political line so that few are contacting. The other conclusion would be that party staff are not forwarding the names or responding to inquiries. Either of these possibilities would have dire consequences for any effort to build the party and would spell doom for the future of the party if this is continued.

Prioritize youth
The Houston club is greatly encouraged by recent discussion documents that seek to prioritize youth organizing and overall party growth. With such a commitment, we believe, must come a transparent and sincere endeavor to cultivate better internal communications. Specific improvements of day-to-day operations in the party, providing appropriate resources to local clubs, and giving potential recruits an opportunity to connect locally must be part of any national discussion.

Positive Internet developments
To its credit, the CPUSA has named Jim Lane of Dallas to coordinate people contacting the party from the Internet, but who do not live in an area with a club. He has been doing a marvelous job and it is paying off. New members have been writing for our press and one wrote an excellent pre-convention discussion document. Party leadership should provide further guidance for Internet use and should articulate the overall outreach, recruitment and political strategies for its use, especially social media, for local clubs as well as the party as a whole.

WHAT IS TO BE DONE?

Outreach to mass media
There needs to be more outreach from the national office to mass media organizations, particularly progressive outlets. Some party leaders have appeared on right-wing shows and that should not be repeated. The party should not be disgraced by being associated with such buffoons as Glenn Beck.
Spanish-speaking outreach

Marxist education
One of the CPUSA’s strengths is our understanding of Marxism and the application of this theory in political strategy and tactics.The working class desperately needs an understandable guide to classic theory and how it is relevant to their everyday life and struggles. The Little School http://tx.cpusa.org/ has made great strides in furthering Marxist education with little support from the rest of the party. Party leadership should support this effort wholeheartedly and provide needed resources to build and expand this effort. Jim Lane is providing webinars on a variety of educational topics and this new technology opens up opportunities for education and training in a convenient, inexpensive on-line environment.

Let’s lead some struggles for a change

The Bush administration took the nation in a destructive direction. This provides us with countless opportunities to lead the working class.

We cannot lead the fight for the interests of the working class by just blending into the Democratic Party and trade unions. Of course, we need to work with these organizations and others and we need to take on our role as coalition and unity builders.

A labor leader once said, "The way to be a leader is to find a crowd and get out in front of it." The CPUSA can lead the masses of working people, the poor and the oppressed. Unfortunately, we have failed to get out in front and in many instances lag behind.

In short, in order for the CPUSA to grow, we need to open up and reach out to the working class. If we fail in this effort, the working class will suffer while the capitalists will notch up another victory.

This is an exciting historical period. CPUSA is uniquely positioned to use our historical materialist methodology to lead our class, the working class, forward! The dismal records of the Democrats and Republicans have failed us miserably. Working people need a party that will speak for us. We need a party that sees things from our perspective. That party is the CPUSA!

Houston, Texas Club of the CPUSA 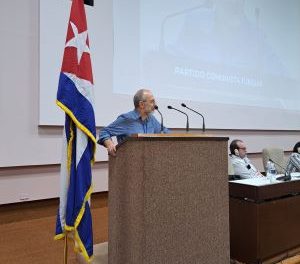