It is not easy to schedule an interview with Camila Vallejo.

One must literally take a place in the long line of Chilean and international journalists requesting just a few minutes of her time. It’s obvious that she is no friend of the Chilean press, mostly right-wing.

model it defends threatened by social discontent led by students and seconded by professors, workers and thousands of anonymous Chileans who are tired of abuse at all levels.

The University of Chile Geography graduate and student body president at this institution heads a new generation of leaders who did not suffer the horrors of the Pinochet dictatorship and are confronting authorities three times their age with audacity, impressively when they appear to defend their ideas before the Chilean Congress, on television and Internet social networks.

The firmness of her stance, often branded as unreasonable, did not prevent Camila, granddaughter of a former Revolutionary Left Movement (MIR) member and daughter of Communists, from successfully appealing to thousands of Chileans to take to the streets and winning the support of 80% of the population for the students’ demands.

September 3, Vallejo and other high school and university student leaders met with PiÃ±era and several other ministers in an attempt to resolve a conflict that has been unfolding for three months. The La Moneda meeting could mark the beginning of the end, or perhaps not, given that the President has categorically rejected free education, one of the central demands of university and secondary school students.

Many Chileans go to Argentina to study because it is less expensive to pay for lodging there than tuition in Chile. According to the Assembly of Chilean Students Exiled for Education, there are between 4,500 and 5,000 attending the UBA, La Plata and IUNA.

It is a fact which clearly exemplifies why we find ourselves today in the midst of such a massive and broad struggle. We live in a country where education, along with other basic services, such as health and housing, are extremely expensive and, therefore, quality and availability are limited to those who can pay. That is why one of our main rallying points is the defense of a quality, free of charge education for all.

How united is the movement in resisting political pressure, not only from the right and the government?

The movement has several strengths such as its breadth, which goes well beyond students and has transformed it into a social movement; the unity of the different participants linked to the educational world who, after a lengthy process, have been able to join forces in an effort to present unified demands; the inclusion of the citizenry’s opinion, inasmuch as a democratic process has unfolded during which discussions have defined the best strategies to use and finally, the movement has the benefit of the historic experience of different movements which have preceded us, such as the 2006 pingÃ¼ino movement which had Michelle Bachelet on the ropes, but did not yield the changes promised.

The movement will use all of these resources to confront the different tricks which could come from the right as well as the government, and from which we have been able to defend ourselves thus far.

How do you view the government’s behavior? It has given no answer to your demands, made feeble statements and tried to portray the marches as violent.

The government is not listening to the citizenry, showing that it is prepared to continue adamantly defending its educational model, which means assuming the price of ignoring what the people have been massively demanding for three months. They have taken full advantage of all the tools the government and the Chilean right have at their disposal Â the communications media, the police and military forces, the support of large businesses Â to discredit the movement, depending on lies and populist strategies.

The social pressure that the movement has generated has obliged PiÃ±era to show what his government is made of, what constraints of democracy he is willing to ignore and who he really represents, which has resulted in enormous disdain and disapproval of his administration, already seen in the latest surveys which the government has historically endorsed.

The questioning of the [government’s] inability to meet the demand for free, quality public education for all has faced new levels of repression which surpass any limit of tolerance acceptable within a state of law. During these months of protest we have witnessed aberrant abuse by the police force, following executive orders given by the Minister of Interior and Public Security Rodrigo Hinzpeter, which reached its most critical point last week with the death of a student.

To what do you attribute the people’s support?

This movement is more massive and broad than any seen since the return to democracy (1990). A large percentage of those who at one time supported

PiÃ±era have come to understand that this is not a direct attack on their position but rather on a model that views education as a commodity and not as a right and on a democratic system which is not inclusive. The questioning of the government’s role by citizens who once supported the current president makes clear that an understanding does exist that the struggle we are involved in is for the right to education and a change in the system which would benefit all of society and the development of Chile, and is not limited to benefits for one particular political sector.

Is the movement polarized?

To understand this conflict, it most be analyzed from two angles. First we have the fact that the educational problem is generalized across the population, generating massive support for the movement from diverse sectors and those involved in education.

However, on the other hand, we have a minority ideological layer within the dominant classes for whom a change in education is not convenient, both because the current system directly fills their pockets, as well as because it protect their privileged position within a poorly educated society.

The fact that two educational alternatives are counterpoised is a product of the intransigence of this last sector. That is to say that the polarization is not within the student movement Â which has been able to prioritize unity, acting in a joint manner Â but rather because it represents the enormous contradiction between the changes the citizenry is now demanding and the position of a conservative minority whose interests the president represents.

You have faced criticism and attacks. How do you feel when they say that you are a pawn of the Communist Party?

I am, in fact, a member of the Young Communists of Chile and this is something I have never hidden. On the contrary, it’s something I’m very proud of, since it is a great school which has allowed me to grow and develop politically. It was to be expected that, in the current situation, those who can’t deal with the conflict look for arguments like these to attack not just me personally, but all of the leaders.

What is clear, however, is that today I represent not just students at the University of Chile, but have also been called upon to speak for students across the country, as the spokesperson of the National Federation of Chilean Students (Confech), and the legitimacy which both students and the citizenry have given my efforts, I believe clearly shows that these accusations are no more than dirty, desperate strategies attempted by those, as I have said, who have not been capable of winning the debate of ideas.

Do you plan to continue as a leader in the future, in a country lacking young leaders?

In countries like Chile, where the mass media is directed for the most part by the powerful, they attempt to discredit social movements and their leaders, such as occurs in Mexico. However, the movement for education in Chile has been so broad that, despite disparaging efforts by the media, the citizenry continues to support the cause, more firmly all the time.

As for my future, I have said on several occasions to the media that I have personal academic plans, that is to say I would like to finish my degree and follow that path. I do consider my position as a representative a responsibility, and in no way a privilege, so I cannot a priori say that I will continue holding positions as a representative of the people.

How do you view this responsibility?

I am confident, however, that we have done things well, that is demonstrated by the incredible popular support we still have three months after the initial mobilizations. If at this stage of the game, if the movement does not see that its demands are met, it will be as a result of the intransigence of the government and of the Chilean right’s betrayal of the citizens, something we are not willing to tolerate.

What is your opinion of the ConcertaciÃ³n in all of this?

The ConcertaciÃ³n has played a basically opportunistic role trying to reap political advantages from what is happening in the country today. In this vein we have seen how figures from this grouping have emerged to criticize the educational model, former president Ricardo Lagos for example, who today said, "The model cannot hold up anymore," apparently forgetting that they themselves were the ones who administered and increased the commercialization of education.

Additionally, an important portion of the membership of this group are supporters of colleges and have invested in the higher education business.

Despite this, given the level of representation the ConcertaciÃ³n has in Parliament, it behooves them to make good on their statements in support of the movement.

That is to say, they should make sure that the proposed laws which have emerged from the mobilizations fully represent what the popular demands have established, and for no reason whatsoever, return to negotiating behind the backs of the movement, as ultimately happened in the process of the 2006 RevoluciÃ³n PingÃ¼ina. 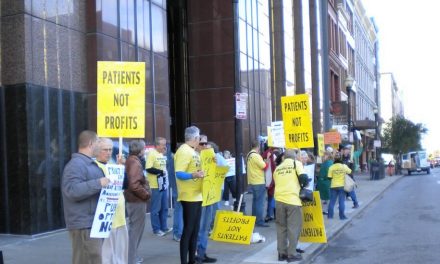