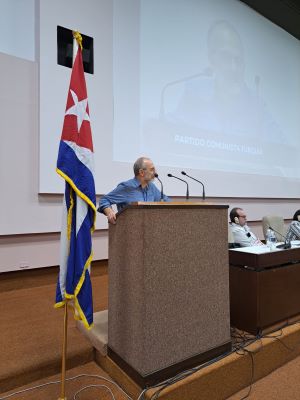 October 29, 2022 at the 22nd International Meeting of Communist and Workers Parties in Havana, Cuba.

On behalf of the Communist Party of Turkey, I greet you with the most sincere feelings of comradeship. We all came to Havana, knowing that this meeting has a very special meaning. I would like to thank the Communist Party of Cuba, which has made a great effort to preserve the achievements of the revolution under very difficult conditions and has brought a unique energy and dynamism to the ideal of communism for nearly 70 years.

Three years ago, at the closing of our meeting in Izmir, I said that “communists may encounter tasks and potentials that will arise from very different developments at any moment in a chaotic world full of uncertainties”, and I emphasized that this would create both great risks and also opportunities.

Not many months after this meeting, we encountered the reality of Covid-19. It is of course possible to see the pandemic as a disaster that threatens humanity as a whole. But for communists, Covid-19 is proof of the impotence of capitalism, how the market economy has brought humanity to the brink of collapse and decay, and how international monopolies can turn a pandemic into an economic and political opportunity for themselves.

Although in each country there has been a struggle to claim the rights of the working classes, to repel the attacks of capitalism or, as in the case of Cuba, to demonstrate an economic, political and scientific resistance against the imperialist siege during the pandemic, unfortunately, the communists during the pandemic, have failed to render socialism an alternative.

The pandemic is over, but there is an economic crisis impacting the whole world; the rising costs of living are the top priority for billions of people. News bulletins debate whether a nuclear war is approaching or not. Workers are desperate, young people are hopeless.

Communists, on the other hand, have to be the remedy and hope.

We cannot be a remedy and hope without emphasizing the goal of overthrowing capitalism. Whenever the communists leave a gap, the populist right, racist movements and even fascists come to fill it. They capitalize on the pessimism in society with a false radicalism.

Comrades, the defensive strategies of the communist movement over a very long period of time have completely collapsed at the crossroads of humanity today. The fact that in this conjuncture the correlation of forces is clearly against the working class, against the revolutionary movement, does not justify these strategies, on the contrary, it condemns them. Today, no matter how weak the communist movement is in individual countries, we are obliged to make the alternative of socialism actual and realistic.

What TKP is trying to do in Turkey is exactly this.

Our country is a country where coups, political Islam, fascism and militarism have come to the fore for years. When analyzed from this point of view, democracy must first be built in Turkey. However, democracy cannot be built in Turkey, which is dominated by a developed capitalist class and powerful monopolies. We know that to postpone socialism by saying human rights first, democracy first, peace first, etc. is to surrender to the dictatorship of capital.

We are not doing this.

For years, a trap was set in front of the communist movement in this country by saying that fascism must first be defeated, the Kurdish problem must first be solved, democracy must first be established. Now it is said “Erdoğan must go first”.

Erdoğan must go, yes. As soon as possible. However, among those who say “Erdoğan must go first”, the pro-NATOists and pro-American-British liberal circles are the most vocal. They want to take advantage of the anti-Erdoğan energy accumulated in Turkish society to maintain the capitalist power that Erdoğan serves at and to give him credibility again.

Comrades, TKP calculates the given correlation of forces in the most realistic way in terms of its own actions and preparations. But we build our strategy according to the deepening of capitalism’s crisis of governance, which makes itself felt more and more, and that this chaotic period becomes more overwhelming.

It is a principled attitude for TKP not to be a part of the pollution created by many seemingly left political movements competing with each other to play a role in solutions within the limits posed by the capitalist order. Our party has a long-standing, not-to-be-underestimated experience in countering the influence of the reformist left, which sometimes appears in the guise of new social democracy, sometimes with a cheeky liberal discourse, and sometimes with a hollow radicalism that we have witnessed very often in the past.

This is a revolutionary assertion. We know our inadequacies and mistakes. But the biggest mistake is to postpone the goal of socialism and revolution. History will not forgive us if we get stuck in parliamentary goals or organs intrinsic to capitalism at a time when capitalism is so shaken and unsustainable.

When we act with this courage, we observe that we make progress, we become more convincing and we are much more able to compensate for our mistakes and weaknesses more rapidly.

Communists led historical transformations in 1917, 1945 or 1959 not because the correlation of forces was in their favor, but because they were able to give a revolutionary response to the rapid changes in objective conditions.

Today, in 2022, in the capital of socialist Cuba, which is the outcome of such revolutionary vigilance, let us launch a new period in which we witness the resurgence of the communist movement, where we engage in real debate and co-operation, where we learn from each other and become excited by each other’s struggles.

My best wishes of success to you all, comrades…

Beware of the Risen People!

Kicking it up a Notch