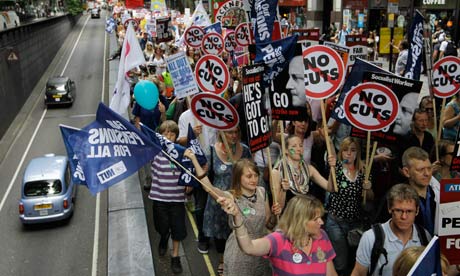 The strike—labor’s most powerful weapon against capital, except maybe sabotage—is disappearing even more rapidly than unions, which is saying a lot. The Bureau of Labor Statistics reported this morning that there were 15 work stoppages involving 1,000 or more workers in 2016. That’s 1 above the average of the past five years, and down 96% from the average of the late 1940 and 1950s.

Stoppages include both strikes and lockouts—the data series doesn’t distinguish between the two. The overwhelming majority are strikes. Notable exceptions in recent years have been in professional sports, but in a bizarrely hostile and destructive move, Long Island University locked out its employees in September 2016. From here on, I’m using the word “strike” rather than stoppage because it sounds far better with only a minor loss of accuracy. 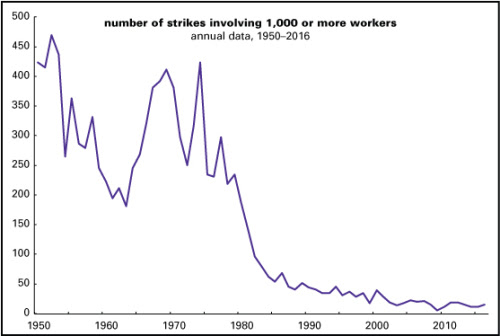 This decline is even more impressive—or distressing, if you prefer—when you consider that employment has more than tripled since 1950. That is brought out by another series from the BLS, days of “idleness” (a nicely Victorian word, as if striking was a leisure activity) as a percent of total working time. (See graph below.) Even at its peak in 1959, at a mere 0.43%, idleness was never that big a thing, but in every year since 2009, it’s been statistically indistinguishable from 0. 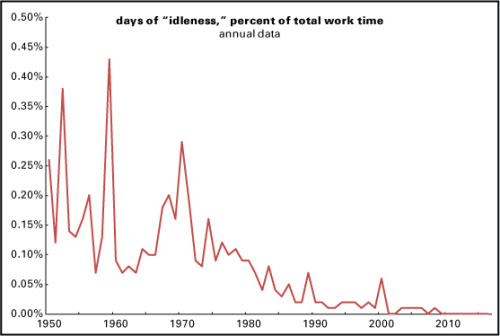 It’s wonderful to hear people talking lately about a general strike and a women’s strike. It would also be good to see some of the old-fashioned kind too. Employers hate them, because they disrupt production, raise wages, cut into profits, and remind them of the potential power of labor. When I wrote up the 2013 data in April 2014, I ended the post with this:

Jane McAlevey, the ace labor organizer and author of Raising Expectations (And Raising Hell)…says that her mentor, Jerry Brown of 1199 New England, used to say that workers should strike at least once every two years just to remind them of their power. Those were the days.

With the labor movement about to face an unprecedented attack by every level of Republican-dominated government not that the Dems have been all that supportive, but this is going to be a whole new kind of hell, it’s alarming to see the working class so out of practice at deploying its most potent weapon.