Finally, after much uncertainty, on the anniversary of the October Revolution of 1917, the numbers added up and US President Donald Trump found that — despite winning over 70 million votes — he would not be re-elected. His rival, Joe Biden, has been in public office for four decades and has a record that should not delude anyone. But this was less an election for Biden and more an election against Trump. More so, it was a popular vote against the neo-fascists around the world who take pleasure in Trump’s promotion of their repulsive agenda founded on racism, misogyny, and other wretched social features that privilege hierarchy over society.

Trump’s defeat in the polls does not immediately impact people like Prime Minister Narendra Modi of India and President Jair Bolsonaro of Brazil, since both have seen climbing poll numbers despite their miserable performance during the pandemic. Nonetheless, their seam of highly toxic thinking is no longer going to be broadcast from the pulpit of the White House.

A President Biden will scrub the walls of the White House of that toxicity but not of the otherwise ‘normal’ terrors inflicted on the world by the United States government on behalf of the ruling elites of the North Atlantic states and of the transnational corporations that they control.

There should be no illusions about the period that will open up when Biden is inaugurated in January 2021. There will be little change on several major issues: the illegal sanctions against countries such as Cuba, Iran, and Venezuela; the total fealty to the Israeli project to annihilate Palestine; the trade war against China; the disregard for rising inequality and for total social collapse; the hesitation to transform the United States itself to non-fossil fuel energy.

Biden – and his vice president Kamala Harris – will speak the language of ‘multilateralism’, but they will use that language to advance the strengthening of the North Atlantic alliance system over the rest of the planet through the G7 and NATO. Hemmed in by a Republican Senate controlled by the encrusted conservatism of Senator Mitch McConnell, a Biden presidency will continue to promote the interests of the US elites against a resurgent China.

History does not allow us to be sanguine; our great struggle to lift the world towards decency and equality continues.

Vijay Prashad is an Indian historian, editor and journalist. He is a writing fellow and chief correspondent at Globetrotter, a project of the Independent Media Institute. He is the chief editor of LeftWord Books and the director of Tricontinental: Institute for Social Research. He has written more than twenty books, including The Darker Nations: A People’s History of the Third World (The New Press, 2007), The Poorer Nations: A Possible History of the Global South (Verso, 2013), The Death of the Nation and the Future of the Arab Revolution (University of California Press, 2016) and Red Star Over the Third World (LeftWord, 2017). He writes regularly for Frontline, the Hindu, Newsclick, AlterNet and BirGün. 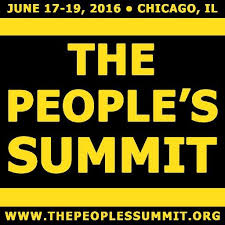 Democrats in Denial: The People’s Summit