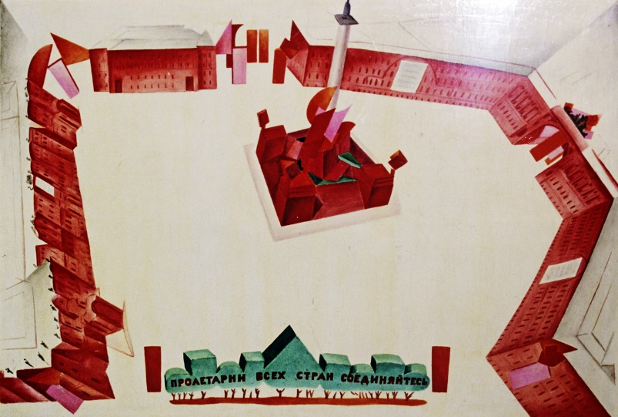 With the Russian Revolution of 1917 the dispossessed took control over their destiny, for the first time in history. How did artists respond to this liberation?

Artists from all artistic movements worked with the Soviet power. The revolution offered the state and the arts a real opportunity to merge their programmatic ideas. Lenin saw social and cultural revolution as inseparable, and the artistic avant-garde embraced the new opportunities. The arts were to be democratised, artistic production transferred from the private to the public sphere, and “the streets to be turned into a celebration of art for all.”

The 1918 May Day celebrations were a first impressive manifestation of this. The next major assignment was the decoration of Moscow and Petrograd for the 1918 October celebrations. Over 170 artists participated, exhibiting an immense range of artistic expression. Alongside images of workers, soldiers and peasants there were ambitious modernist projects, such as Nathan Altman’s transformation of the Alexander Column in Palace Square, Petrograd, into a “Flame of the Revolution,” devouring the symbols of tsarism. Altman fused geometrical structures in shades of red to create a dynamic composition, which attracted international attention.

Great artistic variety marked the time immediately after the revolution. From the early 1900s there had been a significant Russian avant-garde. Many of these artists engaged with the challenges of a new society. The constructivists, for example, criticised bourgeois “embellishments,” demanding a truly new era in art, beginning with “the new houses, the new streets, the new commodities” created by the proletariat.

Art was not to be a “sacred temple.” The new starting-point was to be labour, the factory, producing art objects for all. This innovative art was inspired by left-wing futurism. Vsevolod Meyerhold pursued such an original approach in the theatre, while the modern medium of film, with Eisenstein’s and Pudovkin’s outstanding productions, took its triumphant course. A mass audience turned the art of the avant-garde into a broad movement.

The “poster and meeting period”

Lenin was keenly aware that the revolution depended on overcoming the cultural backwardness of the vast country, with its relatively small working class and millions of largely illiterate peasants. Education was a primary cultural task. Some ethnic minorities had no script for their language. Anatoly Lunacharsky became commissioner of education and culture. He oversaw the early “poster and meeting period,” in which experimental artists pursued revolutionary innovation of various art forms, aiming to enhance the political possibilities of art.

Poster art blossomed, exhibiting a whole range of design principles. Dmitry Moor’s world-famous Have You Enlisted? and his poster Help, occasioned by the famine on the Volga, are composed in concise, expressive pictorial language.

In an effort to respond quickly to current affairs, Mikhail Cheremnych put a hand-painted poster in the window of the Russian Telegraph Agency (ROSTA) in Moscow in 1920. This initiated the satirical ROSTA windows, of which the painter and poet Vladimir Mayakovsky became the chief representative. Over a hundred assistants reproduced the hand-painted Moscow posters, using templates, often making three hundred copies. Stencils were sent to other cities.

In the days before radio, these windows announced news faster than newspapers. In about two years more than 1,600 posters were produced; Mayakovsky supplied the texts for almost all of them. This work necessitated direct communication at the centre of his art, reaching out to the new reader. A new “language” combined word and image. Over-dimensional characters dominated, and images accentuated words. Mayakovsky’s rhythmic language and appeal influenced the entire collective of ROSTA artists.

In his poetry, Mayakovsky also revolutionised the use of language, infusing the energy, confidence and stride of the revolution and displaying this on the page:

My most respected
comrades of posterity!
Rummaging among
these days’
petrified crap,
exploring the twilight of our times,
you,
possibly,
will inquire about me too.

And, possibly, your scholars
will declare,
with their erudition overwhelming
a swarm of problems;
once there lived
a certain champion of boiled water,
and inveterate enemy of raw water.

Professor,
take off your bicycle glasses!
I myself will expound
those times
and myself.
I, a latrine cleaner
and water carrier,
by the revolution
mobilized and drafted,
went off to the front
from the aristocratic gardens
of poetry¹

Mayakovsky invested enormous energy in touring the USSR with his verse and reciting it to large audiences.² Imagery and tradition Given an 80 per cent rural population and in some regions up to 75 per cent illiteracy, visual imagery was paramount. Motifs came from Russian fairy tales, folk art paintings, and even Russian Orthodox icons. The “new masters” were symbolically represented as giant figures, wrapped in red tunics or shirts, clearly surpassing the “old days.” These were especially popular.

Art had to take effect among the people, as Mayakovsky stated: “The streets are our brushes, the places our palettes. To work, futurists!” Proletkult (proletarian culture) aspired to a revolutionary working-class art, inspired by the building of a modern industrial society in backward, rural Russia.

In October 1917 Aleksander Bogdanov founded a cultural organisation of the proletariat, encouraging workers to write, furthering proletarian culture. Red memorials When the revolution suffered foreign military intervention (from February 1918), Lenin initiated “monumental propaganda,” to communicate the ideas of the revolution through monuments. Among the first assignments was a redesign of the tsarist Romanov Obelisk in Moscow to commemorate great revolutionaries, inscribing on it the names of Marx, Engels, More, Winstanley, Stepan Razin, Owens, Saint-Simon, Bakunin, and many more.

This declared the international character of the proletarian revolution. (The obelisk recently reverted to its pre-revolutionary form.) Revolutionary tableware Agitation porcelain holds a special place within “agitation and mass art.” Petrograd artists discovered in 1918, in the imperial porcelain factory, large quantities of unpainted white plates, which they designed with slogans and original ornaments. These china objects took on the function of indoor posters, reflecting the artistic nature of the outdoor posters. This revolutionary tableware still conveys the spirit of those years. The variety of these works of art is overwhelming. Avant-garde artists decorated traditional delph; and constructivist and suprematist artists, such as Kazimir Malevich, Vasily Kandinsky, and Nikolai Suetin, designed cups and jugs of the future.

A new aesthetics arose from artists identifying with revolutionary transformation, representing individuals not as separate but as part of their people, depicting them as torch-bearers of a new humanity. This was a singular achievement of the revolution.

Never before had the dispossessed been presented in art as the decisive factor in historical change; never before had they been made artistically worthy on such a scale. In this sense, the art of revolution began with some new forms, and above all with a new central character.

For the striking  images contained in this article, go to <http://www.communistpartyofireland.ie/sv/09-art.html>

About the Book of Roger Keeran and Thomas Kenny