The Communist Party and the Road Ahead

Convention Discussion: The Communist Party & the Road Ahead

All of these attacks on working and oppressed Americans have taken place without real and lasting opposition. Much has been lost, but the attacks have spurred a militant resistance and given birth to struggle on a scale not seen in this country in decades.

How has the playing field changed post Occupy? Just a few years ago an explosion of working class struggle took place on a scale not seen in decades. Taking place under the banner of a massive social movement known collectively as Occupy, the movement brought hundreds of thousand into struggle. Oppressed nationalities, immigrants, low wage workers, the bread & butter of the American working class launched a full scale resistance to the right-wing agenda. They popularized the class struggle with a call for the struggle of the 99% against the 1% and the corporate right-wing agenda. Unfortunately, the movement ultimately failed to offer a solid critique of the capitalist system, an electoral challenge to the far-right agenda, and the leadership required for concrete social change.

As a result it dissipated, leaving the masses without leadership. Despite the failures of the Occupy movement, it will have an everlasting effect on American politics. It represents a left turn for many working Americans, a resurgence of working class militancy, and a new willingness for struggle outside of the normal channels. Is there a resurgence of working class militancy? Today it’s no doubt that widespread dissatisfaction with the system is growing. We live in an America where 49% of people aged 18-29 favor the concept of socialism over capitalism, according to a recent Pew Poll. An America where over 40% of Americans identify as independent rather than Republican or Democrat, according to a recent Gallup Poll. First we saw the Wisconsin Uprising and the Occupy movement, both examples of mass working class resistance.

We’ve seen the heroic struggle of low wage workers through movements like Our Walmart and Fight for 15, both growing rapidly. We’ve seen highly successful independent labor and socialist campaigns in Ohio, Washington State, Mississippi, New England and beyond. We’ve seen the Chicago teachers fight back, we’ve witnessed UAW Volkswagen workers in Tennessee struggle against right-wing repression in a bid to form a union. Many important struggles have taken place lately, more than one can count. It’s clear that we are seeing a resurgence of working class militancy and a willingness to fight back against injustice and exploitation. What does all of this mean for the Communist Party?

We have entered a new phase of the democratic struggle. The Democratic Party is increasingly pandering to the most reactionary sections of the transnational corporations, becoming increasingly hostile to progressives and the American worker. While the progressive wing of the Democratic Party remains essential in the struggle against the far-right agenda, it has become is increasingly necessary for the Communist Party to offer a left-wing challenge to reactionary Democrats.

Many Democrats are lining up to appease capital, calling for compromise with Republicans and joining in on the war against the workers. The Communist Party has historically represented the most advanced sections of the American working class. We are duty bound to provide a challenge to the far-right agenda, be it Republicans or Democrats who are fostering it. We are duty bound to build and lead a mass movement capable of tackling the challenges of our generation. Change in the political landscape means change for the Communist Party. Now that the substance of the struggle is changing, so to must the party.

The policy of building up an all-people’s front against the far-right has never been as important as it is right now, but we must consider how we can best approach this daunting task. After witnessing the success of local progressive & socialist campaigns, it’d be foolish not to participate local electoral struggles. Exclusive support of non-Communists through standard progressive channels isn’t enough.

The mass struggles of our generation are unfolding at super stores and burger joints, not factories and steel mills. In conclusion, we must build a strong and independent Communist Party. A party capable of leading the working class into a new phase of struggle against the increasingly vicious far-right agenda. Most importantly, we must remember that struggle against the right-wing agenda is also taking place in the party. The right-wing of our party is fighting for the liquidation of the party into the broader progressive movement, a move that would no doubt have a devastating effect on real working class politics in this country.

Developments within the Imperialist System ? The New Dynamics in the Anti-Imperialist Struggle

Letter to Embassy of Czech Republic 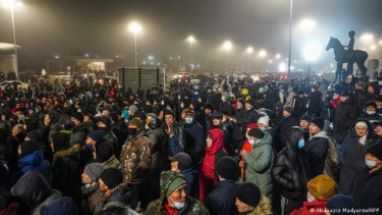