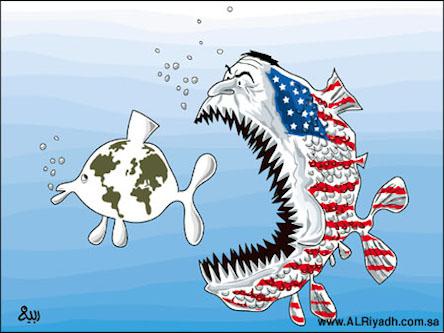 And sometimes the word is used in all three senses:
In the 1980s and early 1990s, global trade began to expand at a rate greater than its historic average. Revolutionary changes in logistics– containerization, transportation, inventory control, and information transfer– dropped the cost of transportation and shipping dramatically. Political changes unified the global market with the integration of the PRC economy and the breakup of the socialist economic community. Many emerging nations joined the global market when the socialist development model lost its sponsors. Similarly, capital flows expanded with the removal of political and Cold War obstacles. The workers formerly buffered by an alternative economic system– over a third of the global workforce– were cast into capitalist labor markets, an unparalleled infusion of cheaper labor. Capital mobility, political hegemony, and the logistical revolution brought additional low-cost labor from emerging economies into the global nexus. All of these factors and others achieved an increase in the rates of production, economic growth, and trade that persisted for over two decades.

The recognition of the failure of the Keynesian consensus among policy makers led to a return to classical market fundamentalism. The long stagnation and rampant inflation of the 1970s defied and discredited the various iterations of pump priming and fiscal mending that had served as tools since the Great Depression. The political reaction — the ascendency of Thatcher, Reagan, and their political offspring — brought a new set of prescriptions founded on free, unfettered markets.

International capitalist structures — IMF, World Bank, Bank of International Settlements, OECD, GATT etc. — and new ones– WTO– unhesitatingly embraced the return to market fundamentalism. In the wake of the new consensus, a slew of free-trade agreements was constructed to formalize the born-again faith in free markets, the most celebrated of which was the North American Free Trade Agreement. In the mid-1990s, the OECD attempted to secretly establish the most ambitious international compact, the Multilateral Agreement on Investment, an accord that would have given virtually unimpeded freedom of action to multinational corporations. The efforts to canonize market fundamentalism and formalize the tenets in institutions and trade agreements continue to this day– for example, in the Trans-Pacific Partnership.

For some, including a significant part of the academic left, the quantitative and policy changes unfolding in the 1980s signaled a new era of capitalism. As two influential theorists ominously put the matter: “Today we are in the early phases of the fourth epoch of capitalism.” In a hurry to replace Lenin’s theory of imperialism, they, and others, posited a stage where corporations eschewed a home base and adopted the entire global economy as their domain. At the same time, they saw a decline in the authority and significance of the nation state. International organizations like the IMF and the WTO were seen as nascent replacements for the nation state. Clearly, the concept of imperialism plays a diminished role in this picture.

The notion of a “centerless” capitalism reached its extreme with the publication in 2000 of Hardt and Negri’s Empire. This impenetrable, rambling exercise in pretension and intellectual indiscipline became an academic best seller and a fixture on the coffee table of every petty bourgeois rebel. The book wiped away in one fell swoop the identities relevant to left politics and replaced them with the amorphous concept of “the multitude.”

The World Trade Organization calculates that, historically, typical trade growth runs at about 1.5 times GDP growth. During exceptional periods like the so-called globalization era, trade often grows at twice the rate of GDP. But WTO notes that today (and since the crisis began) the rate of growth is approximately the same for both trade and GDP (trade growth was actually below GDP growth in 2016).

After years of brisk growth, global container traffic slowed to 1.1% in 2015 and was virtually flat in 2016. Thus, the primary impetus for the globalization thesis– global trade growth — has evaporated.Other indicators hailed as signposts for globalization have also collapsed: foreign direct investment, the harbinger of future trade growth, was 40% less in 2015 than its pre-crisis peak. International lending, as measured by the Bank for International Settlements, dropped 9% over the two-year period, 2014-2015.

Clearly, the 2007-2008 collapse choked off the growth celebrated as “globalization” as emphatically and dramatically as it was heralded in the 1980s. Those who saw a new stage or epoch of capitalism emerging are surely chastened by its demise. Rather than signaling a new, triumphant age of capitalism, the global burst of growth beginning in the 1980s came from a unique, unrepeatable conjuncture of factors fortuitous to global capitalism. An unparalleled expansion of skilled, low-cost labor, a revolution in technology and logistics, and US political hegemony created momentum unusually favorable to capitalist growth.

That momentum is now spent.The theorists who foresaw a post-imperialism accompanying globalization were quickly dispelled of this illusion with a succession of imperialist wars masking as humanitarian intervention. In 1998, France, the poster child for national pride, squelched the MAI (Multilateral Agreement on Investment) that threatened to erode national sovereignties and hand them to the corporations.

The nation state was far from dead as the aggressor or the victim. In the twenty-first century, the aggressors were, time after time, the wealthy, powerful nations (in alliances of convenience) and the victims were the poorer, weaker states.

The copies of Empire have long vanished from the coffee tables. On the left, the heavy lifting against the “left” post-imperialism, globalization thesis was done by the editors and many of the writers at the estimable US magazine, Monthly Review. Throughout the 1980s and 1990s, MR carried on an intense campaign against the notion that capitalism had morphed into an economic system unrecognizable by classical Marxism. That battle has been won.

The Remains of Globalization

Globalization lives today only as an ideology, a set of policy prescriptions intimately linked to market fundamentalism. It sets the goal of removing any and all international barriers to markets. It draws its support from those who benefitted the most from the nearly three decades preceding the 2007-8 crash. In the advanced capitalist countries of Europe and North America, the capitalists, their courtiers, and a substantial petty bourgeoisie enjoyed large gains in income and wealth. The shift of manufacturing to low-wage countries and the growth of demand for raw materials trickled some benefits to workers in emerging economies.

But few benefits accrued to the traditional workforce of Europe and North America. Deindustrialization, redundancy, de-unionization, income stagnation, reduced and underfunded social services, and crumbling physical infrastructures have created working-class communities of hopelessness and despair. The ubiquitous signs of social deterioration — alcohol and drug abuse, suicide, violence, unhealthy lifestyles — have accompanied globalization in these countries.  The crash of 2007-2008 brought the misery of working-class communities to a head, with harsh political consequences. The bourgeois and social democratic political parties of Europe and North America were unable to contain the anger and frustration of most workers.

Further, the post-Soviet-era retreat from Marxism left most political parties heartily embracing the harsh tenets of market fundamentalism and its accompanying global trade policies. The so-called era of globalization coincided neatly and significantly with the rise of “New” Democrats, “New” Labour, and “New” Socialists, the “left” purveyors of market fundamentalism. Their dominance of their respective parties drove the last remnants of welfare statism to the exits.

Excepting a few remaining mass Communist Parties committed to sweeping capitalism into history’s dustbin, workers were left with no real choices, no alternative to parties wedded to free markets, corporate success, and the decidedly failed slogan that “a rising tide lifts all boats.”

To step into this void, to present an alternative for workers, to establish a working-class beachhead, new political figures and formations sprung up throughout Europe and North America. Presenting a nationalist alternative to the internationalism of globalization, promising jobs on the basis of protected borders from foreign workers and global trade, and conjuring imagery of a lost golden age, politicians and parties challenged the monolithic ideology of unrestricted market relations and global exchange that brought such pain to the working classes.

This awkward amalgam of right-wing nationalism and populist rhetoric gained traction in recent years only because of the failure of traditional parties to break away from the dogmas of market fundamentalism and the failure of the left to establish an alternative to it. The feeble attempts by social democrats to conjure their own distant memories of the welfare state have fallen on deaf ears. Likewise, the anarchist-inspired turn to vague, utopian radical democracy offers no counter vision to capitalist economic relations.

Against the backdrop of two bourgeois political parties with an overlapping core commitment to the same failed economic philosophy, the fact that the first successful election of a right-wing “populist” occurred in the US should come as no surprise. Trump represents an alternative in desperate times, a false alternative, but an alternative nonetheless.For Europeans, Trump provides a foretaste of the contradictory character of the nationalist-populist brew. As Trump’s first month demonstrates, there is no content to “populism” beyond the fawning service to monopoly capital, cheerleading for small businesses, and an occasional soundbite for the working class. All the benefits to the working class are supposed to come from closing the borders to commodities, both human (labor power) and material (imports).

Assuredly, the nationalist alternative to marketization, commodification, and globalization will fail. At best, it will intensify competitive rivalries in the short run, creating bigger winners and bigger losers. But ultimately, economic nationalism will cost the global economy in terms of growth and inequality.

It must be noted, however, that the fierce fight against Trump and the forthcoming political struggles to stop the nationalist parties from power in Europe are tragically misguided if they simply succeed in reproducing the disastrous market fundamentalism and globalization policies that produced Trump and his counterparts in the first place.

Only something different from the false choice of market internationalism or narrow, fear-driven nationalism will spare the working class even greater pain. The two ideologies that are contesting for global hegemony are merely two versions, two faces of imperialism.Nostalgia for a long-lost, never-to-be-recovered, welfare-state capitalism will not serve the left in this time of crisis. Instead, we need to craft a bold socialist alternative.

The ABC of Bourgeois Politics