From the Keynote Address to the 37th Central Convention of the Communist Party of Canada, presented by party leader Miguel Figueroa.

A central focus of our Political Resolution deals with the deepening crisis of global capitalism, and with the working class and people’s fightback against the consequences of that crisis in Canada and around the world. We have been reminded once again that this crisis is far from abating by the recent events in Cyprus over the past several weeks, threatening to plunge the European banking system into yet another round of crisis.

Even the Financial Times was forced to admit that the "risks for Europe are significant… The prescription of universal [sic] austerity combined with kid‑gloves treatment of big investors in banks is increasingly toxic to European voters. Leaders have just added fuel to the fire."

The Cypriot crisis also brings a much larger issue into focus ‑ the stupendous amounts of "buried treasure" which international finance capital has ferreted away in so‑called tax havens to avoid paying taxes on wealth, of which the Cypriot banks are but the very small tip of the iceberg.

According to the Tax Justice Network, the total value of such organized "tax avoidance" has now reached as much as $32 trillion dollars worldwide. Bearing in mind that global GDP is around $78 trillion, this suggests that the super‑rich are hoarding the equivalent of up to 40% of the world’s annual output ‑ yet further proof that "austerity" is all about protecting monopoly interests and increasing the accumulation of capital, while making the working class and the people pay for the crisis.

The other fundamental aspect of the general crisis of capitalism is, as we know, increasing militarization and the drive to war, the drumbeats of which grow ever louder with each passing day. While the imperialist war machine has already rumbled through many countries over the recent past ‑ from Yugoslavia and Afghanistan to Iraq, Libya and most recently in Mali ‑ fresh wars are brewing against both Syria and the DPRK.

Indeed a foreign‑sponsored covert war on Syria has been raging for more than two years. Now, both Britain and France, under the "socialist" government of Francois Hollande, are raising the stakes, pressing for overt military assistance to the Free Syrian Army and other armed groups fighting to overthrow the Syrian government.

Meanwhile, tensions have sharply escalated on the Korean peninsula, as the South Korean regime, Japan, the U.S. and the other imperialist powers including Canada are working overtime to provoke a military conflict with the North. It is naive not to see this dangerous escalation as a consequence of U.S. imperialism’s recent strategic "pivot to Asia", the main objective of which is to encircle and "contain" the People’s Republic of China.

In both cases of Syria and the DPRK, groundless claims are bring advanced that these countries have and are preparing to use Weapons of Mass Destruction (WMDs), and that under the doctrine of "responsibility to protect", direct imperialist intervention "may be required".

Needless to say, imperialist war in either of these strategic regions could quickly escalate into wider conflicts and possibly more generalized war, with horrific consequences for humanity. We express our solidarity with the peoples and governments of both Syria and the DPRK at this critical moment, and condemn the imperialist campaign to impose sanctions, hatch conspiracies and foment war against these countries.

With this in mind, we should resolve to increase our anti‑war efforts, especially within the labour and other people’s movements, against any further imperialist aggression ‑ whether it be against Syria, the DPRK, Iran or elsewhere around the globe.

Let us now turn to the situation within our own country. The Political Resolution ‑ which will be strengthened during the course of our deliberations this weekend ‑ gives a rather comprehensive picture of the crisis as it reflects itself in Canada today, of the austerity agenda being imposed by governments at every level, and of the socio‑economic and political consequences this capitalist offensive is having on the working class, Aboriginal peoples, women, youth and students, farmers, seniors, and so on.

The recent federal budget shows that there is no let‑up in the intensity of that offensive, despite the hype in the corporate media downplaying its pro‑corporate and anti‑people content. Setting aside the window‑dressing about cheaper baby clothes, hockey skates and hospital parking, the guts of this budget are very clear: (1) a further $4 billion cut from program spending which will eliminate more jobs in the public sector (adding to the 2 million unemployed across Canada) and further erode programs and services for the people; (2) billions more in giveaways and tax incentives for corporate Canada; and (3) an accelerated drive to impose the pro‑corporate CETA trade & investment treaty with the European Union, and to press forward with privatization.

These austerity policies ‑ which are being applied at the provincial and municipal levels as well ‑ have already proven themselves patently incapable of creating jobs for the unemployed, raising living standards, reducing social disparities and securing the future for working people; on the contrary, they are laying the foundation for an even greater recession and, depending on the impact of the deepening crisis in the global capitalist economy, a full‑blown depression.

Indeed, Canada’s growth rate ‑ measured in Gross Domestic Product (GDP) ‑ has slowed to 0.2% in each of the last two quarters. This amounts to an annualized growth rate under 1% ‑ essentially zero growth. So much for the Tories’ Economic Action Plan!

Why then do right‑wing bourgeois governments stubbornly persist on this austerity course? Because from their class perspective, such policies actually serve the immediate interests of the big banks and monopolies. Crippling the trade union movement, swelling the ranks of the unemployed, privatizing programs and services, and increasing social insecurity ‑ all these act to drive down the cost of labour‑power and correspondingly increase the rate of profit and the accumulation of capital.

Only a powerful and united struggle of the workers and their social allies can create a political crisis which will force the ruling class to retreat, and create conditions for the labour and people’s forces to go onto the counter‑offensive, to change the balance of class forces in the country, to curb corporate power and open the door to a revolutionary advance to socialism…. 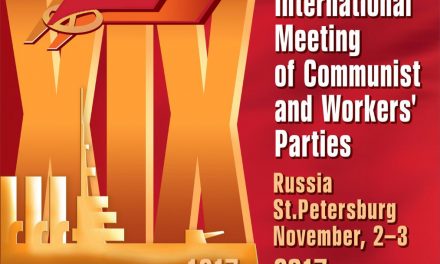 IMCWP: What Happened at the St. Petersburg Conference