The Imperialist Conflict Is Escalating – KKE 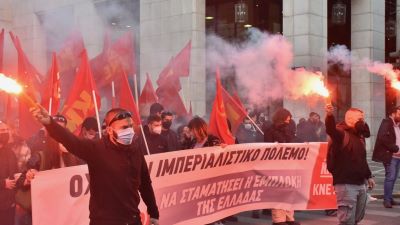 Greece must immediately disengage from the dangerous EU-NATO plans!

The imperialist war being waged in Ukraine between the Euro-Atlantic forces and capitalist Russia is heading for a new devastating escalation. It is confirmed that the build-up of military forces and materiel on both sides does not lead to the end of the war, but instead feeds the vicious circle of the continuation and intensification of the conflict.

In recent months, the USA, NATO, and the EU have embarked on an unprecedented political, military, and financial support of the reactionary Zelenskiy government, with the aim of reversing the balance of power on the battlefields, which now extend over 1,300 km. Modern warfare systems, military advisers, mercenaries, and the stocks of NATO countries’ military depots have been generously provided for the continuation and escalation of the war, which is being waged not for ‘freedom’ and the right of the Ukrainian people to ‘self-determination’ in choosing allies, as they claim, but for the interests of the Western monopolies.

On the other hand, the Russian leadership, which proceeded with the unacceptable and reprehensible military invasion of Ukraine, is taking additional measures considering that it is drifting away from its objectives. Putin’s address on 21 September provides for the beginning of the annexation process of 20% of Ukraine’s territory to Russia, which will be carried out both by political means, such as referendums set up in those regions, and by military means, such as the legalization of paramilitary ‘voluntary’ groups, the ‘partial mobilization’ of 300 thousand reservists, and the threat of the use of nuclear weapons. The Russian leadership, seeking to conceal the aims of its own monopolies, once again invokes the so-called denazification of Ukraine and the ‘self-determination’ of the Russian-speaking populations, adding the risk of the disintegration of Russia in the event of a military defeat.

The Greek people, as well as all peoples, must reject the false pretexts used by both sides and target the real causes of the imperialist war, which concern the division of mineral wealth, energy, territories and labour force, pipelines and commodity transport networks, geopolitical supports, and market shares. That is what the bourgeois classes and their imperialist alliances are clashing over.

The New Democracy government and the other Euro-Atlantic parties in our country, such as SYRIZA and PASOK-KINAL, bear heavy responsibilities for Greece’s involvement in the war: For the use of the country’s military bases and infrastructure for the needs of the imperialist war and other NATO and US plans. For the enlargement of the NATO alliance with new countries, which they jointly voted for last week, for the shipment of weapons systems, ammunition, etc.

This involvement casts a dark shadow over the future of our people, who are becoming the target of Russian retaliation, thus becoming entangled in the ‘meat grinder’ of an unjust war that is waged for foreign interests.

– Greece’s participation and involvement in the imperialist war in Ukraine be stopped immediately.

– All NATO and US military bases in our country that are being used as bases of war be immediately closed down. Greek territories, infrastructure, and resources stop being military strongholds.

– No Greek military corps be sent to Ukraine, to countries bordering it or to other imperialist missions. No conscript, officer or non-commissioned officer outside the borders. That the shipment of war supplies and means of warfare from Greecebe stopped.

– Greece’s sanctions against Russia, which follow EU guidelines and have major economic consequences for the Greek people, be lifted.

We strengthen the struggle for the disengagement of our country from the imperialist unions of NATO and the EU, with the people being masters in our land.