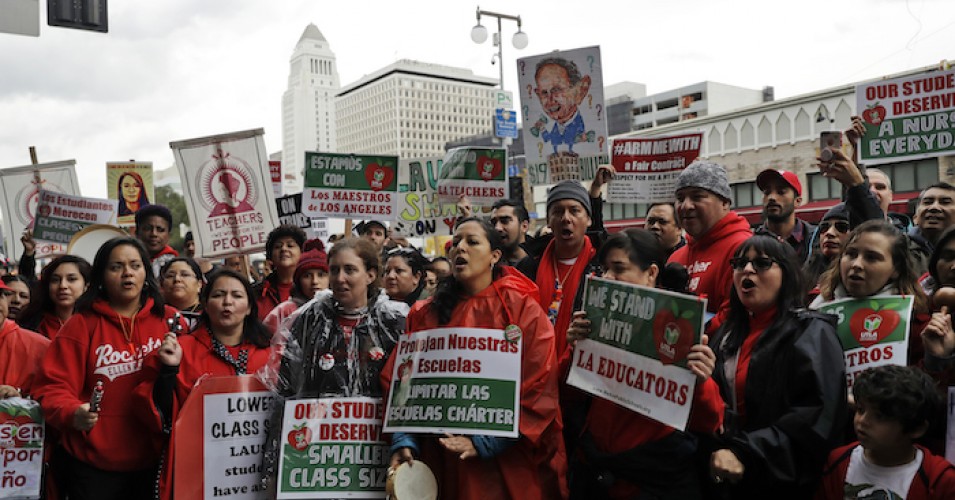 Los Angeles public school teachers began a historic strike on Monday, for the first time in 30 years. Members of the United Teachers of Los Angeles (UTLA) walked out of contract negotiations with the Los Angeles Unified School District (LAUSD) that had dragged on for nearly two years. The specific battle is being fought over LAUSD’s refusal to tap into its record $1.86 billion reserve in order to reduce class sizes, hire more support staff, including counselors and nurses, improve infrastructure and more. But more broadly speaking, the L.A. teachers’ fight is symbolic of a bigger struggle to maintain and expand quality public education for all Americans and to secure the rights that the critical stakeholders—teachers, students, parents—have within that system.

The L.A. teachers’ strike comes after several high-profile fights last spring in states like West Virginia, Oklahoma and Kentucky, where educators tired of poverty-level wages fought for raises and won. But the L.A. strike is broader than those others, not just in terms of the sheer size of the district and the union, but in the demands the union is making. Although LAUSD has offered a 6 percent raise over two years (not nearly enough of what teachers deserve), teachers want an overall better experience for their 600,000 overwhelmingly nonwhite students. They want more nurses and counselors, smaller class sizes and a halt to the expansion of charter schools.

In usually sunny Southern California, the 2019 teachers strike was launched during a week dominated by cold, windy, rainy weather, 30 years after the last such strike. In spite of the wintry conditions, tens of thousands of teachers, counselors, nurses, union organizers, and even some parents and students, marched and rallied in downtown Los Angeles and picketed in front of their schools across the sprawling district. I spoke with several teachers who told me about their large class sizes, aging books, leaking roofs and, most of all, paucity of support staff.

Students needing regular medical attention are attending schools where nurses are on staff for only one or two days a week. School counselors and psychologists are forced to work at numerous schools at once, handling emergencies whenever they can. Students who want to use the library have to wait for the brief weekly window during which the school librarian is on call. Meanwhile, charter schools are expanding across the district, drawing from the very pool of limited resources that the public school system relies on, but without being held to the same level of transparency and accountability. L.A.’s teachers are angry about how the district is treating their students—and they have good reason to be.

As first-grade teacher Louise McLorn explained to me, “It’s absolutely not about teacher salaries. That is the last thing that we are looking at.” News reports have cited the fact that the strike may have already cost the district millions of dollars because a majority of students did not attend school on the first day or two of the strike (the district’s funding depends on attendance rates). But what is missed in much of the coverage is the fact that each day educators are on the picket line, they lose pay. Union members turned down the modest pay raise they were offered, holding out instead for concessions centered on student welfare.

McLorn rattled off a list of her concerns, saying, “There is a hole in the roof of my classroom, so that needs to get fixed. We have students that need much more counseling than they’re getting, but psychologists have to go from school to school to school.” She added, “It’s less expensive to educate than incarcerate.” Over and over, the teachers I spoke with repeated some version of McLorn’s sentiments and echoed her struggles in the classroom.

Some teachers were pointedly critical of Los Angeles School Superintendent Austin Beutner, a man media outlets describe as “A former investment banker with no history working as an educator.” Andy Dowdell, from Fleming Middle School, said, “He’s kind of like some of those people that Trump’s hired to dismember, to take apart these bureaucracies, and he’s trying to do that to our district.” Dowdell suspects that Beutner’s real agenda is to privatize the school district.

In fact, LAUSD insists on keeping more than 25 percent of the budget as surplus instead of the required 1 percent, raising suspicions about its agenda (what would be enough of a reserve, one wonders?). Mike Fahy, a special education teacher at Le Conte Middle School, explained to me that the broken computers he needs to teach dyslexic students to read need to be replaced. But the district won’t fund the needed upgrade. “There’s simply no money for supplies for my school, so I end up buying the supplies myself, because I don’t want to run a ‘poverty program,’ ” he said.

Fahy has a theory. “We’re being set up to fail by the decisions of the district and the school board,” he told me. Le Conte shares its campus with a charter elementary school. “In my school the students come in and they’re 90 percent brown. At the charter school on our campus, the students are 90 percent white. So the white kids go over there and the brown kids come over to my school.” According to Fahy, “The other school is being run like a private school on the public dime.” In the long run, he fears that unregulated charter school growth will result in LAUSD becoming “a special-ed district for the ‘problem kids.’ ” He has good reason to issue such a dire warning. Examples abound in places like New Orleans, where public school systems embraced charter schools only to end up an even more segregated system that fails students and teachers.

But corporate-minded elites across the U.S. are hellbent on viewing education as a business, and they see teachers as ungrateful moochers who are looking for easy paychecks funded by taxpayers. The Wall Street Journal published a sneering editorial on the first day of the Los Angeles teachers strike, fixating on the increasing costs of teacher salaries and pensions as requiring new tax programs every few years. The paper’s editors did not even acknowledge the third-world conditions that L.A. schools struggle with—schools situated in the world’s fifth largest economy and within the world’s richest nation. They defended charter school expansion and laughably described such schools as a “refuge for low-income and minority students.” In contrast, New York Times contributing writer Erin Aubrey Kaplan explained last year that “[i]t’s partly because diversity can be managed—or minimized—that charters have become the public schools that liberal whites here can get behind.”

Fahy’s colleague, Helen Allen Jackson, who is also a special education teacher at La Conte Middle School, shared with me the daily trials and travails and she and other teachers struggle with. “Our students come with a lot of baggage, and they really need more help. We are counselors, we are nurses, we are everything [to our students], and it is overwhelming,” she said. When I asked if her workday ended when she got home, she exclaimed, “Absolutely not!” Other teachers who had gathered around us nodded their heads vigorously in agreement. “It never ends,” Jackson said, laughing slightly hysterically at the idea that her job was a “9-to-5” position.

Los Angeles teachers are telling the district and the world that their public schools have been deeply damaged by years of austerity. They are offering clear solutions to fix the damage and pointing to the money that the district already has in hand. They have the power of collective action through a union to make their demands, and ultimately, the district needs them more than it cares to admit. Thirty years ago, it took nine days for the district to acquiesce to the legitimate concerns of union members. How long will it take this time? 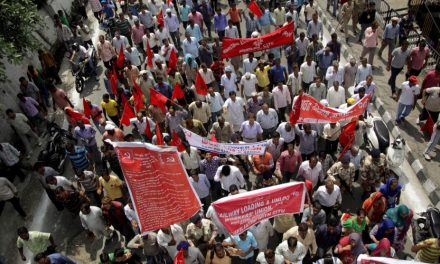