The US Secretary, Condoleeza Rice, in her turn by Lebanon and Israel yesterday and today has announced the US imperialism position about the deepening of crisis in Middle East region. She said what the entire world already knows – that her country supports in an unrestricted way the Israeli attacks to Lebanon and USA identifies itself with the Zionist aims and methods.

US imperialism is formulating, together other alchemists of the super-new world order they intend impose to nations and peoples, that they denominate as "lasting solution" to the Middle East crisis. Tomorrow in Rome they is going to do a test during the called Rome Conference which joins the Lebanon Group formed by France, United Kingdom, United States of America, Egypt and the World Bank. The Lebanese government has announced that will not be present in case of Israel be invited and in case of Lebanon be present it will defend the immediate stop firing.

The "lasting solution" proposed by USA it is a part of the "Middle East restructuration plan", priority of Bush Administration, to be reached by preemptive wars, attacks to the national sovereignty of Arabian countries and violation of international law.

The Bush’s secretary already has said in advance that doesn’t accept the proposal for an immediate stop firing. This position corresponds to a carte blanche to Israel goes on with bombings and even to occupation of the South of Lebanon. USA proposes the creation of a multinacional militar force, under the OTAN responsability and legal support over some resolution of the UN Security Council. In lack of conditions to sign any new document, USA proposes the "total application of Resolution 1559", dated from September, 2004, which determinates the extinction of all militias on the South of Lebanon. So, Washington wants showing legality and a "multilateral" action for the Israel struggle to exterminate the Hezbollah.

In any point of view, Mrs. Rice’ proposals are unacceptable ones. On the present conditions, a multinational force will be an interventionist force and will mean the end of Lebanon’s national sovereignty. The price to implantation of US proposals is an enormous bloodshedding from the Palestinian and Lebanese peoples, the Lebanon destruction and the Palestinian State unfeasibility.

The solutuion to the present crisis has only one point of departure — stop the Israel bombimg against Lebanon. As well as a lasting solution demands the Israeli evacuation of all Arabian and Palestinian territories (about what the internacional community should demand the accomplishment of the previous UN resoltuions), the recognition of an independent national State to the Palestinian people and the respect to the national sovereignty of neighbour countries.

There is a very simple formula to put an end to Middle East terrorism, instability, crisis and wars: to stop the State terrrorism of the US imperialism and its Israeli allies and finish the preemptives wars of Bush Administration.

The Communist Party of Brazil ? PCdoB 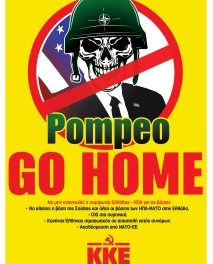 Statement in Solidarity with Palestine and Lebanon