The Tennessee Vote on the UAW: Class Collaboration or Class Struggle?

Lost in the current discussion about the rejection of the UAW at the VW plant are a few questions that need to be front and center for all of labor. Why do workers need a union in a capitalist society and what type of union organization is best suited to defending and advancing their interests?

With manufacturing wages down 3% since 2009, median wages down 8.3% from 2007-2012, 44% of the population living in what is referred to as “liquid asset poverty” (four person household with less than three months savings), and one in seven eligible for food stamps, the need for strong and vibrant unions is greater than ever. The whole working class in the USA is in desperate need of labor organizations that will openly defend their immediate interests and consciously promote programs and solutions that meet the needs of the millions who have no voice.

Instead of advocating a program of struggle that puts the needs of workers front and center, the UAW’s organizing effort at VW in Chattanooga had a “message” that openly aligned the union interests with that of the company.

The UAW’s outlook is summed up by its President Bob King, “Our philosophy,” he said, “is every company that we work with, we’re concerned about competitiveness. We work together with companies to have the highest quality, the highest productivity…” Also, in the Volkswagen- UAW “neutrality agreement” there was a clause that said that the UAW would engage in “maintaining and where possible enhancing the cost advantages and other competitive advantages that (Volkswagen) enjoys relative to its competitors in the United States and North America.” How can workers get motivated to join an organization that does not talk about workers rights, but instead whose primary concern is about the company’s profits?

Is it not a company union when the employer as did VW, actually encourages and welcomes its workers into a “union?” If the unions’ main concern is to actually “help” the company, why join it at all? VW openly admits that it can get greater productivity and profits if the workers are unionized by the UAW. Given this confusing message, it’s not hard to see why many of the VW workers were less than excited about joining the UAW.

Predictably, the union blamed the defeat on right wing Republican politicians for interfering with the vote. Writing about the election, Leo Gerard, president of the United Steelworkers says, “That’s because organized labor has always stood for everything the GOP hates: “Social Security, Medicare, Medicaid, unemployment insurance and the 40 hour work week. Republicans denounce workers exercising their right to concerted action, at the workplace and in Washington.”

It’s as if we are to have our heads in the sand and never ask how it is that Gerard’s corporate “partners” are allowed to escape any responsibility for actually promoting and leading this anti labor onslaught. For isn’t it these same corporations that are in fact the real money and impetus behind the class war against labor? Who funds the GOP henchmen that he throws up as a bogeyman?   These corporations, those who Gerard calls “partners” are the real enemy of every effort to kill all labor and social legislation that he talks about.

As for the other “defenders” of workers rights, the Democrats, no one was complaining about silencing the workers “voices” or a lack of “democracy” when elected Democrats in the Seattle area and the state of Washington recently ganged up on the rank and file machinists at Boeing and demanded that they take “concessions” from a hugely profitable company. These workers were facing not only the Boeing corporation but their own top union leaders who sadly but not surprisingly unilaterally demanded a second vote on a concessions laden contract that had recently been voted down by the rank and file. Neither did union officials from the AFL-CIO complain about “interference” when the California Democratic congressional delegation sent a letter to Boeing saying that they would work to insure that the demands of Boeing would be accepted by California’s workers if the company left Seattle. One of the “demands” by Boeing was to eliminate the defined benefit pensions for new hires.

In Boeing’s annual report just released, the 2nd largest federal contractor claimed $82 million in federal tax refunds, even though it reported $5.9 billion in U.S. pre tax profits last year. This represents an effective tax rate of minus 1.4%. Boeing paid just $11 million in Washington state income taxes, and effective tax rate of just 0.2 percent.The information is contained in Boeing’s form 10-K filed with the U. S. Securities and Exchange Commission (SEC). Since 2008, Boeing has reported between $1.6 billion and $5.9 billion in profits each year, and yet has paid no federal income taxes in three of those years. Over the last six years, Boeing has reported $26.4 billion in pre-tax profits to its shareholders, while claiming a total of $105 million in refunds from the IRS, an effective tax rate of minus 0.4 percent. Labor could gain a great deal of public support by publically countering this corporate tax dodging. They could begin a real political and economic movement by mobilizing and involving the majority of citizens who in every public opinion poll say that taxing the rich is a priority rather than cutting Social Security and other safety net programs. To mount such an effort is not pie in the sky or a pipedream, but a necessity.

Unfortunately, the IAM top leadership like that in the UAW and the USW see the profits and productivity of the company as their main concern. No labor / community mobilizations or nationwide publicity campaigns were forthcoming from the IAM to support the Seattle workers who rejected Boeing’s demand that they reopen their contract. Why? It’s simply not possible to pursue such an adversarial approach of actually defending workers when the union’s philosophy is essentially no different than that of the company.

Gerard also forgot to mention another real impact of his unions “partnership” with the steel industry. The practical effect of putting the company’s interests first. The steel town of Clairton, an impoverished community about 20 miles south of Pittsburgh has had its tax base gutted by the tax reassessments of the local steel plant owned by USX. The local solicitor for the Clairton school district was recently interviewed in a Pittsburgh Post Gazette article and called the USX reassessments “laughable” and refers to them as a ‘throwback to the Gilded Age where these corporate entities did what they wanted to do.” Clairton is home to the U.S. Steel Clairton Coke Works, the largest coke-making facility in the United States and also a major emitter of particulate matter in the region. Because of the coke works, this whole community has been designated as a non-attainment area. This means this area is not meeting the federal health-based standards for soot. Frequent air quality alerts are issued for the area, the latest deemed a “Code Red” on February 11, 2014 signified that the air was unhealthy for every one in the community. To add further insult, President Obama visited this same steel plant recently to talk about his sudden interest in the economic inequalities of American society. All the local business, labor (including Gerard) and political “partners” dutifully patted each other on the back, silent to the real impact of these profit first policies.

Another, not too pretty picture for those “enlightened” advocates of labor management partnerships.

The UAW defeat in Tennessee will apparently not cause any debate or reconsideration of labor’s strategy or tactics by top leaders. In a recent interview in the Wall Street Journal, Richard Trumka, President of the AFL-CIO said that the labor needs to strengthen its ties with “every progressive group in the state” and Larry Cohen president of the Communications Workers of America said “one of labors strategies will be to link up with civil rights and human rights groups fighting issues such as voting rights. If we separate these issues, we all lose.” While in and of itself, uniting with community allies and other groups is a worthwhile goal, however, it is no substitute for a democratic grassroots union movement whose primary concern is fighting for workers on the job. What’s lacking from labor is a popular anti corporate economic and political message which must be the foundation of any real grassroots coalition. Because it refuses to challenge corporate power and engage in any substantive independent economic or political program, labors “alliances” consist mostly get togethers with other top down organizations affiliated with the Democrats.

The sad fact is that the top labor leadership in the US is firmly tied to this collaborationist approach and worships at the altar of “labor management partnerships.” This approach has demoralized, demobilized, confused and weakened the ability of labor to mount any kind of fight to protect the elementary interests of union members and the working class in general. Union membership is down to less than 9% of the private sector workforce and the same corporations that are supposedly “partners” on the job spend all their resources funding think tanks, anti labor media empires and politicians who either openly campaign to destroy labor or others who do nothing to stop these attacks.

Workers can’t be organized into unions and those in unions cannot be mobilized into action if there is no message of building their independent power to protect their jobs and their living standards. It’s a tough “sell” to convince workers to pay dues to an organization that has no fight and its program is little different than the company’s propaganda brochures. Top down approaches that talk about “partnerships” and cooperation with the company take away the unions’ fundamental argument and reduce the workers to passive consumers whose primary relationship to the union is to simply pay dues rather than activists who build a real organization that they control.

With big business on a wholesale attack against everything labor has won over decades and the objective living standards falling for union workers and the working class in general, there’s no doubt that organization is needed to counter the auto giants and other multinational corporations that control the economy and both major political parties.

The labor movement faces a situation that has parallels to the past in US labor history. During the 1920’s and early 1930’s conservative and collaborationist union officials did little to organize the mass production industries, fight for jobs, unemployment compensation, social security or other benefits. These “leaders” were also paralyzed by a “do nothing” philosophy of partnership while conditions for the working class grew worse by the day.

In spite of these “labor statesmen”, the left and other progressives continued the fight and built organizations that defended the basic interests of working people, engaged in mass struggles and in the process, they created the foundation which led to the unionization of the mass production industries and the mighty river of the CIO. Today, it will take a similar upsurge from the bottom up of labor to change the direction from one of phony partnerships to that of mass struggle. This must be labors message in this time of crisis.

This critical debate, discussion and organization needs to happen because without it, the vision of “labor management partnerships” will blind us all.

E. J. Dewey is a labor and political activist with over 30 years of experience, including 15 years as a central labor council president. 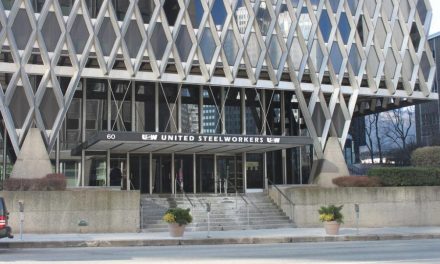 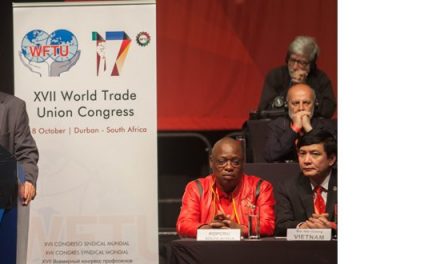