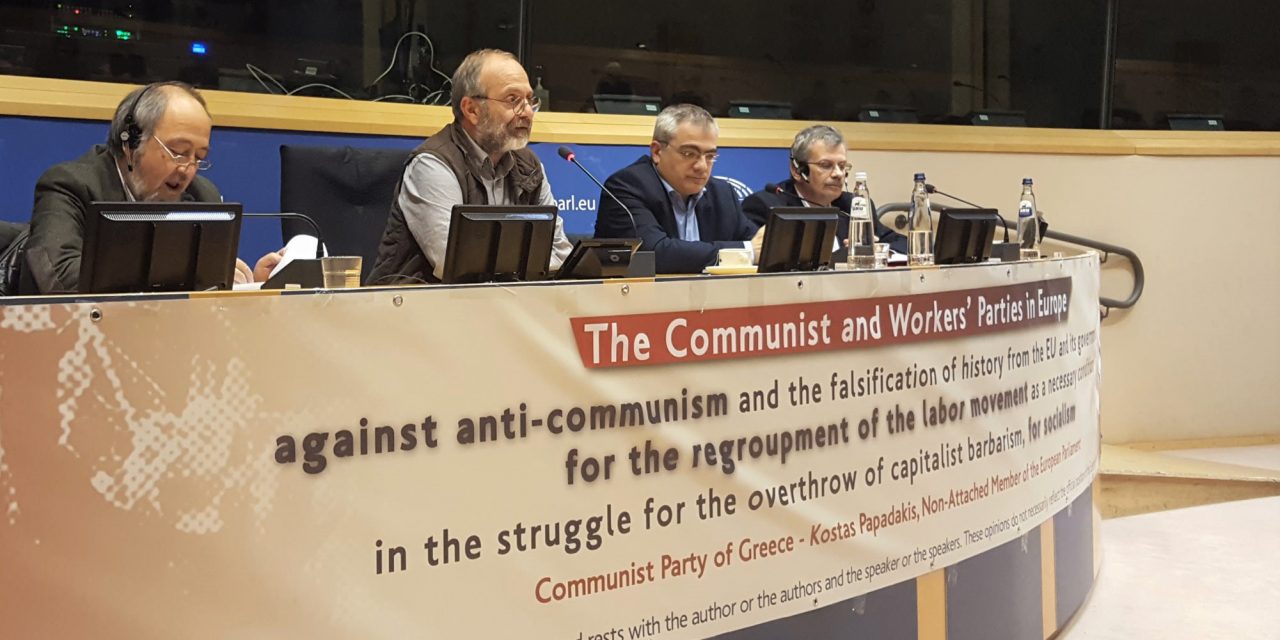 TKP Secretary General Kemal Okuyan made a speech at the European Communist Meeting 2019, which focused on the “Struggle against Anticommunism”. In his speech, Okuyan explained the rationale of anti-communist campaigns of today and proposed concrete methods for the joint struggle of communist parties to combat anticommunism.

The full text of the December 9th speech follows:

It is an honour to meet our fraternal communist parties, in a short time after the 21st meeting of world communist parties in İzmir. On behalf of the CC of TKP, we are cordially saluting the KKE for their invitation and organization of the European Communist Meeting, and all other participant parties.

Comrades, Lenin once said that the parliament is the barn of the bourgeoisie. Under the very same roof of this building, three months ago, this was once again proven. An outrageous resolution has been passed, with the approval of the majority of the MEPs. It takes further the previous similar resolutions of the same institution. This single decision is enough to disqualify those 535 men and women from representing the people of their respective countries and of Europe. Regardless of how “democratic” they claim themselves, with this act, they are falling into the same category as the Nazi propaganda machine. The unfortunate content of the resolution is not worth mentioning in this talk.

Today, we are here to discuss and shape our common strategy against anticommunism. Anticommunism has been used a flexible, multi-functional instrument by imperialism and inter-imperialist alliances. When struggling with anticommunism, we should be aware of its broad range of uses and debunk them one by one.

Looking at today’s conditions, three decades after the counterrevolution and the dissolution of the Soviet Union, we see that many of the 20th century gains of the working class are undermined, including its combativeness and militancy. These thirty years saw the harshest anti-people attacks in every country, including the so-called welfare states. In the beginning they were very happy, delighted after they declared the collapse of their nightmare. However, especially in the recent years, the imperialist system has been drawn into a political-economical crisis- which was the inevitable outcome of a system that is based on socialized production and private ownership of the means of production. The crisis is visible to the naked eye, a general stagnation in the growth rate of economies, ongoing wars and the threat of a global war and immense inequality are signs of it. Even though today the communist movement does not constitute a massive or determinant force, and even though for the moment there is a negative correlation of forces against the working class, the bourgeois forces of today aim to prevent its awakening and potential rise as a response to the crisis of capitalism. They aim to weaken not only the efforts to revitalize the communist movement, but also every single bit of organized resistance of workers.

The communist movement stands on the legacy of the glorious victory of defeating fascism, a victory gained with the flesh and blood of millions of Soviet soldiers, partisans, communists of other countries. The defeat of the monster of fascism has long been an unquestionable achievement, respected and admired by all peoples of the world. The moves of European bourgeois politicians serve on the one hand to open this victory to be questioned and on the other, to justify, to legitimize fascism, or at least to alleviate its illegitimacy.  They are calling the honorable history of the Soviet citizens as some “tragic past”. What is the outcome of it? While communism is criminalized, they are normalizing and paving the way for contemporary fascist movements.

We are seeing that examples of anticommunist propaganda, such as the recent European Parliament Resolution or actions like changing the names of memorials, streets, squares, monuments, etc., aim to distort and generate breaks in the continuity of the history of socialism, and by this, to destroy its historical legitimacy. They are actually trying to create an alleged narrative, a false “remembrance” based on lies and defamations. However comrades, historical conscience is the fundamental armament of the working class movement. History is our teacher, the reference of our class-reflexes, it is the basis of our world-view. By specifically targeting the history, they are trying to render us rootless, to disarm us, and therefore, leave us without a future.

In the text of the EP resolution, of note is the attack against Russian Federation and its leadership. Now, we are never to defend any capitalist country at all, they are the rings of the same chain. But we should see that indirectly, this resolution also plays a role in the inter-imperialist conflicts. The warning or even threatening tone of the text is to help the declining Atlantic coalition get the upper hand on Russia and China. We will not allow our history to be spoiled in their dirty gambling table! Moreover, there is another detail. It should not be overlooked that, they are creating the distortion, as if today’s capitalist Russia is the natural continuum of USSR, which is on the contrary, founded on the ruins of Soviet socialism, plundered its public assets and possesses an absolutely opposite class character.

The amorphous concepts of “fair world”, “open and tolerant societies” etc., as well as the repeated referral to “totalitarianism” are the building blocks of a new and dangerous context of law. By banning the names, publications, actions of communist parties of today and of the past, they are trying to rule out the demand for an alternative social order, of revolution, of the toppling-down of the existing regimes. They are trying to eliminate any possible ways of the questioning of the status quo, by means of national and international law.

Comrades, the first thing to be done is to be true to ourselves. The history of the working class is our history, with achievements and errors, it is our own reality. It should be researched thoroughly by us, by the heirs of those who made the history, to the point where no single moment is left unilluminated. Unspeaking some aspects of our history is actually doing more harm than good. We should not accept any falsification but we should not allow our own errors to be admitted, in a distorted way, by the dominant class. We can openly and objectively declare what has happened when, which decision was taken for what reason. We shouldn’t remain silent about the Nazi-backed disinformations about so-called “genocide by famine (Holodomor)” of Ukrainians in the 1930s or the so-called “Katyn Massacre”. We don’t have a history to be ashamed of.

Secondly, we should also look carefully at ourselves and constructively self-criticise. We should avoid the manners from our side, that would facilitate the attempts to demonize the communist movement. What do I mean? The communist movement should avoid giving a clumsy, nostalgic, out-of-date impression. We should work on the elements that are used by anticommunists to caricaturize communist organizations, to call us irrelevant. This doesn’t necessarily have to mean turning disloyal to our principles or our traditions. On the contrary, the communist movement can be modern, contemporary and firm and revolutionary at the same time. And in reality, if our parties cannot achieve this, we will not be able to resonate with today’s working class and transform it in a radical way.

Comrades, the “Stalin-trap” should be carefully studied. Condemning Stalin, for whatever excuse, is anticommunism. Stalin was not an unmistakable figure, but falling behind in responding to critics against Stalin strengthens anticommunism. In discussions about Stalin, we must never give in, yet, we should be aware that a Stalin fetish does the greatest harm to the legacy of this brilliant revolutionary himself. The dialectics of the struggle around comrade Stalin should be well-calculated.

We should admit that one reason that anticommunism is alive today is the withdrawal of revolutionary ambition by communist parties. A single step back, a smallest resort to passivity results in large loss of previously gained positions.

A major domain of the legitimacy of socialism was the intellectual productivity of communists writers, artists, musicians, filmmakers and friends of the working class. Throughout the 20th century, even during the Cold War, the influence of the bright, monumental works by communists was not easy to devaluate. Think of Rivera’s murals, Shostakovich’s symphonies, Ehrenburg’s novels, Nazım Hikmet’s poems, Greek songs of the civil war… They were a source of enlightenment, development and joy for the proletariat but even more, they gained respect from the ranks of the bourgeoisie, which despite all the investments, could not go beyond Hollywood movies. It is not a coincidence that McCarthyism targeted intellectuals representing our side. Our struggle needs the former productivity of working-class scientists, historians, artists and intellectuals. Of course it is not easy to compete with the predominance of monopolies that shape today’s cultural area, but we have a just and historical cause. This requires hard work and collective efforts of communist intellectuals. It also requires an advanced ideological formation against postmodernism, nihilism and other petit bourgeois currents. The vanguard of the working class should be the vanguard in the collective thinking of workers.

Another point, very simple but repeatedly proven: the best method of defence is to counterattack. We have to organize a strong counterattack against the fragile base of capitalism. We have to display its irrationalities, expose its lies, corruptness, barbarity. We have to show the working class that since 1848 revolutions, for at least seventeen decades the bourgeoisie is reactionary. We should find means to undermine the projects and the profits of monopolies, give every fight necessary to impede their advancement. They shall not pass!

Finally comrades, we should not allow the bourgeoisie to get away with a fait accompli so easily. These attempts should not be left unanswered or unjudged. We have to object against all falsifications and distortions, by means of propaganda, publications and by political and legal means. We should bring these moves to the courts, of states and of people, nationally and internationally.

To conclude, it is our duty to bring those days closer in which anticommunism will be considered as crime. 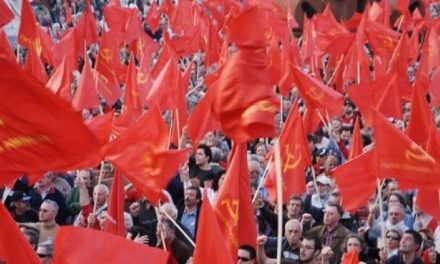 The Referendum on Scottish Independence

Contribution of the General Secretary of the CC of the KKE, Aleka Paparhiga