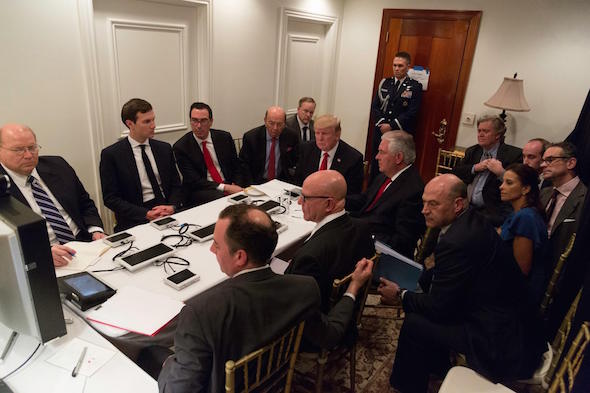 It took less than three months for the War Party to force Donald Trump to abandon whatever notions he might have had about defusing tensions with Russia and disentangling the U.S. from its alliance with Islamic jihadist terror. Last week’s bombing of a Syrian airbase has put back on track the general U.S. military offensive that was begun with President Obama’s 2011 regime change operation against Libya, drastically increasing the odds that humanity will perish in nuclear winter rather than be roasted into extinction from global warming.

Measured another way, the clock has been turned back to September, 2016, when the U.S. bombed a Syrian base at Deir al-Zour, a city in eastern Syria that has been under siege by ISIS since 2013. The attack killed about 100 Syrian soldiers and allowed ISIS to overrun the base and capture a large part of the city. Washington lamely claimed the attack was a “mistake,” but it seemed more like a mutiny. The bombing scuttled an agreement – fiercely resisted by Hillary Clinton’s allies in the military and CIA — that the U.S. share intelligence and targeting information with the Russians.

In bombing Deir al-Zour, the U.S. was acting as close air support for ISIS. The U.S. wants the last Syrian government enclaves in the eastern part of the country eliminated, so that the region can be turned over to “moderate” rebels under the protection of Washington and its Arab allies, effectively partitioning Syria. Last week’s U.S. attack on a Syrian airbase was in support of al-Qaida, the dominant “rebel” presence in Idlib province and the force in control of the town where civilians were killed by chemical agents.

United Nations researchers have confirmed that Al-Qaida has repeatedly used chemical weapons, likely including the August, 2013, attack in suburban Damascus that the U.S. blamed on the Assad government. President Obama then threatened to launch a massive airstrike against the Syrians, but backed off a few weeks later in the face of popular resistance in France, Britain and even some elements of the U.S. Congress.

I believe, however, that Obama called off the bombing in fear of tipping the overall advantage in Syria to ISIS, the “rogue” jihadists that split from al-Qaida. Washington values ISIS’s ability to kill Syrian government soldiers and destabilize the country, but cannot abide its stated intention to ultimately topple the royal regimes in Saudi Arabia, Qatar and the United Arab Emirates, staunch U.S. allies. U.S. military policy has been to contain ISIS, punish its leaders with drone attacks, but to sustain its core fighting force as an asset in the fight against Assad and his allies.

In a sense, last week’s attack takes us back to the days before Obama “blinked” in 2013. His decision not to bomb Damascus brought into the open a split within both the administration and the U.S. military over how to pursue the proxy jihadist wars that have become the tools-of-choice of U.S. imperialism ever since the CIA and the Saudis created the international jihadists network, in Afghanistan, almost 40 years ago.

Former Secretary of State Hillary (“We came, we saw, he died”) Clinton made regime change the central foreign policy pillar of her presidential campaign. Under Clinton’s “no fly zone” policy, the U.S. would act as an air force for jihadists in Syria, just as it had in Libya. When the upstart billionaire Donald Trump began gaining electoral traction with statements opposing regime change and eternal conflict with Russia, the U.S. War Party coalesced within the folds of Hillary’s big tent. The military mutineers that bombed Deir al-Zour in September of last year were undoubtedly certain that a soon-to-be President Hillary Clinton would value their initiative. At any rate, what could a lame duck Obama do to discipline them?

When Clinton lost, the entire U.S. imperial structure, including its corporate media sector — which is the best definition of “Deep State” — went berserk, intent on putting the six year-old general U.S. military offensive back in high gear, even if that meant savaging the legitimacy of the U.S. electoral system and the presidency, itself. Last Friday, Trump abjectly surrendered to the War Party, hoping they will have mercy on the rest of presidency.

Now that the not-as-warlike-as-Obama-and-Clinton Donald Trump is dead, let’s do an autopsy. How did Trump, the most virulently white supremacist candidate of the White Man’s Party, emerge as the least aggressively warlike of the presidential contenders? A Marxist would first examine his class position — his relationship to the international capitalist order that the imperial war machine defends.

Despite the fact that he owns (or fronts for) hotels and resorts in countries around the world — luxury holdings that leave small footprints in the host nations’ economies, not extractive or manufacturing enterprises — Trump’s worldview is homegrown. As a second-generation real estate developer/speculator in the white supremacist U.S.A., Trump artificially enhances property values that are intimately connected to the race of residents and nearby populations. Race has everything to do with his bottom line, as was true of his father, an ethnic cleanser that Woodie Guthrie wrote a song about: “Old Man Trump,” a landlord on whose properties “no black folks come to roam.”

As a kingpin of New York City real estate, Trump helps shape a racialized property market that sees Blacks as debits on the ledger. Segregation, Black exclusion, racist hysteria, is his business. Paying $85,000 for newspaper ads calling for the Central Park 5 to be put to death for allegedly raping a white woman, is part of the cost of doing business for a professional land pirate and ethnic cleanser like Trump.

His foreign policy is reminiscent of southern Democratic politicians in the decades after the Civil War. Although these same southern Democrats had for generations agitated for the U.S. to seize Cuba as a slave state, many of them changed their tunes after Emancipation, cautioning against U.S. acquisition of territories full of “inferior peoples” such as Cuba, Puerto Rico and the Philippines. With chattel slavery defunct, these racist politicians feared that any extended contact with, or responsibility for, non-white peoples would inevitably lead to “race-mixing” and the “debasement” of United States society.

Trump’s “America First” rhetoric is rooted in a racialist worldview. His previous rants against “nation building” in non-white regions are rejections of any extended intercourse with such populations — including military occupations or alliances. He does not (or did not) oppose regime change in the Muslim world because of respect for such people’s right to self-determination, but to keep them at arms length.

However, Trump has no moral qualms about bombing them — especially to avenge chemical attacks on blond-haired children, like the kids displayed by jihadists after last week’s alleged Syrian attack. (Idlib province is home to large numbers of light-skinned Circassians, who were forced out of the Balkans by the Russian Tsar in the late 1800s.) Al-Qaida, and their western media handlers, knew the kinds of images that would put Trump on the warpath. He will pursue the imperial military offensive that Obama initiated, six years ago, with the mad energy of a racist psychopath. And, to keep the Deep State from finishing him off.

There is only one possible bit of solace in these circumstances: If Hillary had been elected, we might all be dead by now.