Our warmest greetings to the [striking] project workers in the Bushehr petrochemical complex and contract workers of the second phase of the Abadan oil refinery.

Forward to the preparation for, and organisation of, labour and general strikes!

The announcement of strikes by contract workers of the oil industry in Asaluyeh, and the contract workers of the second phase of Abadan refinery, along with a recent call by the Coordinating Council of Iranian Teachers’ Trade Associations (CCITTA)‎ for a [nationwide] strike and work stoppage in the country’s schools, is another major step in the organising of a string of crippling strikes aimed towards the bringing about of a general strike. The working class and other working people of the nation, with their protests and strikes in recent years, have not only repeatedly demanded their own trade-welfare interests, but have also demanded the protecting and guaranteeing of the rights of other social strata opposed to the ruling dictatorship.

The struggle of the workers and working people of Iran against privatisation, price deregulation, and anti-people economic programs – such as the targeted [elimination of] state subsidies and the so-called “economic surgery”- that are currently being implemented by the [President of the Islamic Republic] Ebrahim Raisi’s anti-national/popular government, has a definite political substance and character and has certainly posed a challenge to the ruling dictatorship and its socio-economic orientation.

The strikes of contract workers at the oil industry in Asaluyeh and the contract workers of the second phase of Abadan refinery could be the beginning of a series of labour strikes that, amidst the current critical situation, provide a [significant] boost to the growing popular movement against the ruling dictatorship. Labour strikes have bolstered the ability of the masses and social movements – such as the courageous movement of women, students and youth – and can serve to further broaden and further deepen [consolidate] the current nationwide protest movement.

The preparation for, and organisation of, the necessary grounds for strikes at this critical juncture should be done carefully, and in an organised manner, so as to avoid as far as possible any disaffection between the various social forces [in Iran]. It is possible to forge this necessary link between [the workers’ actions] and the nationwide protest movement via a broad united action. This is something that the Islamic Republic is acutely aware, even terrified, of.

In pursuing its longstanding and righteous demands, while emphasising its own class interests, Iran’s working class [also] defends the interests of the whole popular movement; the demands of the courageous women, heroic youth and students who resist the repressive machinery [of the regime] in university campuses and neighbourhoods [across Iran]. The initiation of the strike of contract workers at the oil industry in Asaluyeh, and the contract workers of the second phase of Abadan refinery, are of monumental importance in a situation whereby the regime, through continued repression and widespread detention, tries to stifle the voice of the protest movement. The Tudeh Party of Iran, the party of the working class of Iran, while firmly supporting the strike of the contract workers in projects relating to the oil and petrochemical industries, calls upon all workers, and intellectual and physical working people, to support this strike, take broad united actions, and intensify the fight for the preparation and organisation of nationwide strikes.

Victory to the Iranian people’s struggle against the ruling dictatorship!

Forward to the expansion and coordination of protests and preparation for a general strike!

Our warm greetings to the contract workers of the oil, gas, and petrochemical industries, as well as all the workers and working people of the nation! 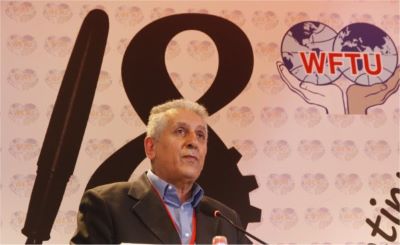 Interview (Part III) with George Mavrikos: “The ‘Specter’ of the Working Class is Haunting the Bourgeoisie Once Again” 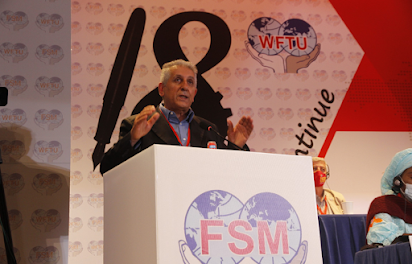 Outgoing WFTU Leader: Pull the Future out of the Mud of Capitalism