The Spoiled Fruits of Class Partnership: US Auto Workers – 100 Years and Still at $5 a Day.

In a July 1, 2014 article in the Wall Street Journal Colum Murphy wrote, “a century ago, when Henry Ford began paying his assembly line workers $5 a day, the equivalent of $116 a day today and double the manufacturing norms of the time, he triggered a social revolution in America that transformed low- paid workers into middle class consumers.”

Without much discussion by US labor leaders, the fact is that the real wage equivalent of $5 per day in 1914 equals (corrected for inflation) the starting wage of $116 per day of today’s autoworkers under new UAW two-tier contracts.

Like hamsters on a treadmill, the conditions of auto workers toiling a US factories have not improved much over the past 100 years.

Integral to Ford’s $5 per day wage was an overall ideological effort to promote worker loyalty to the company so as to reduce employee turnover and create a stable and therefore more profitable workforce that would also make them less inclined to join a union.

In exchange for the increase from $2.34 to $5 per day, Ford established a “Sociological Department” that sent company investigators to workers’ homes for unannounced visits, had them submit to citizenship classes, questionnaires on their marital relations, spending habits, alcohol consumption among other things. If workers did not cooperate with the sociological department or meet their standards, they would only get the regular wage of $2.34 per day and had six months to comply, else risking termination.

In subsequent years, Ford’s assembly line process was adopted by his competitors which cut into his profits, and the inflation during WW I considerably reduced the value of the $5 per day wage. Under financial pressure, Ford replaced the sociological department in 1921 with the establishment of the infamous “Service Department”, consisting of factory spies, informants, and thugs to enforce loyalty. The stock market crash of 1929 squashed the myth of capitalism’s capacity to provide stability by just producing more and more. As the realities of the depression set in in 1932, Ford laid off tens of thousands of workers and cut wages to $4 day, down from the “revolutionary” $5 day of 1914.

Today, just as in the early 20th century, the company’s inexorable quest for profit requires a stable and compliant workforce that not only accepts, but believes in the ultimate virtues of the corporate world. Some elements of the drive to control workers’ consciousness may be different than those of the early 20th century in style, but the essential message remains the same: the company’s pursuit of unlimited profit is sacrosanct and requires employees that believe their values are entwined with this same goal.

In the present day, the union is a crucial element in the corporation’s ideological control mechanism, led by the unfortunate faith in a non-adversarial approach to labor relations. “We’re all in this together mentality” and “what’s good for the company is good for the worker” are some “common sense” nostrums promoted as “practical” ways for the union to operate.

Workers will have to draw their own conclusions as to the end result of the UAW’s long held belief in labor management harmony. This strategy has negotiated a starting auto worker salary no better than 100 years ago after numerous concessionary contracts with no fight back. New auto plants remain unorganized, and there has been a precipitous drop in membership from 1,500,000 in the 1970’s to 400,000 members. Still, its top leadership has not learned any lessons.

Taking the phenomenal increases of manufacturing worker productivity into account, the situation is even more startling. In 2011, manufacturing output per worker increased to a new record high of $156,500 per worker, almost ten times the output of a worker in 1947. Worker productivity in manufacturing doubled in a 13 year period from 1997 to 2010, which has cut employment in this sector by one third. Today, (2010 stats) the average factory worker in America produces more output in one hour than a ten hour worker did in 1947. The labor cost to build a car in a union shop in America today is only about 10% of the sticker price.

The union continues to tie its future and that of the workers to the global success of the auto companies and American capitalism in the belief that it will return the favor. Rising productivity and profits of the companies were supposed to result in a “virtuous circle” of permanent wage and benefit increases for the autoworkers.

Although for a brief period from the 1950’s to the 1970’s, auto workers enjoyed some of the highest standards for workers in the USA, since the early 1970’s this phony “pact” of endless prosperity has been shredded by a one sided class war against auto workers and the US working class. A recent survey published August 7, 2014 by the Federal Reserve, Report on the Economic Well Being of U.S. Households in 2013 reported among other findings that less than 40% of households had enough cash to pay for an “emergency expense” that cost $400. With median wages of all workers down by 8.3% from 2007-2012, manufacturing wages down 3% since 2009, food stamp utilization up by 70% in the last five years, and 35% of Americans facing debt collectors; the objective conditions cry out for a real people’s alternative to the current corporate domination of all parts of American society.

The top leaders of the UAW and their counterparts in the AFL-CIO are either unwilling or incapable of mounting any counterattacks since they have no popular independent program that can inspire a mobilization of the membership on the shop floor or in the general public. The philosophy of labor management partnership and business unionism reduces the union to a neutered dues collection agency incapable of implementing any strategy or tactics that fight the boss at the workplace, politically or in the community.

This losing strategy of collaboration which was evidenced by outgoing President Bob King at the last UAW convention where he stated,

“We want to show and demonstrate, which we do every day, that having a union workforce is a competitive advantage [for the company], not a competitive disadvantage.” The end result of this continued focus by the union on the company’s bottom line and not on the workers’ interests is summed up nicely by none other than Steven Rattner, President Obama’s chief “auto advisor” who negotiated the GM bailout when he wrote in a recent NYT article of January 2014,

“For the United States to remain competitive against countries like Mexico, productivity must continue to rise. But unlike past gains in productivity, these improvements in efficiency are not being passed along to the workers.” Advanced manufacturing—a sector that many advocate as a path for the United States to remain relevant for making things—also involves a high degree of efficiency, meaning not as many hires and particularly, not as many of those old fashioned, middle-class, assemble-a-thousand pieces jobs.”

According to Obama’s “advisors” and the captains of the auto industry, the future for the workers is clear. Increased productivity and the specter of job loss through off shoring are inevitable. These concessions are demanded in the name of the company’s global competitiveness, something that King sees as equally beneficial for the worker as for the company. It’s a fool’s bargain, since King is blind to the reality that corporate America might be recovering with record profits but working people aren’t.

This future is more like a “death spiral’ for workers and their union, the exact opposite of what many economists and top UAW leaders glowingly referred to as the “virtuous circle” of increased worker productivity being rewarded with higher wages by the corporations forever and ever. The general public and taxpayers also pay for this hammering of the working class by granting subsidies to these companies. Tennessee gave Volkswagen around $577 million, an incredible $288,500 for each job that paid about $15 an hour.

The decades of hard won gains by auto workers and the working class in general are being destroyed by capitalists, politicians, and an inept labor leadership that clings to a do nothing losing strategy of ‘partnership” in the face of a clear class war.

Labor needs to reestablish itself as fighting organizations that mobilize their memberships and lead the general public in a mass fight against the corporate domination of society. The way forward is to develop an independent political and economic program based upon the needs of the general public and campaign for it in the workplace and community. A class struggle approach that fights for the immediate and long term needs of the working class can activate those already in unions and inspire the general public to follow. It’s our only option.

—-
With over 40 years experience in the labor, political, peace and health care movements, Ed Grystar has worked as a steelworker, teacher and for a number of labor organizations. He served as President of Butler County (Pa.) United Labor Council for 15 years. 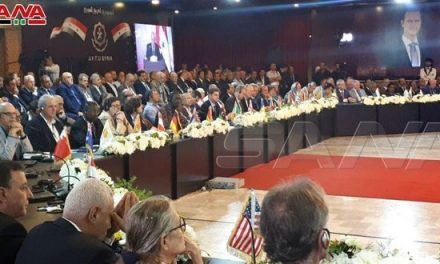 Interview with a US Delegate to WFTU Congress

Without a Left, US Labor Continues its Downward Spiral