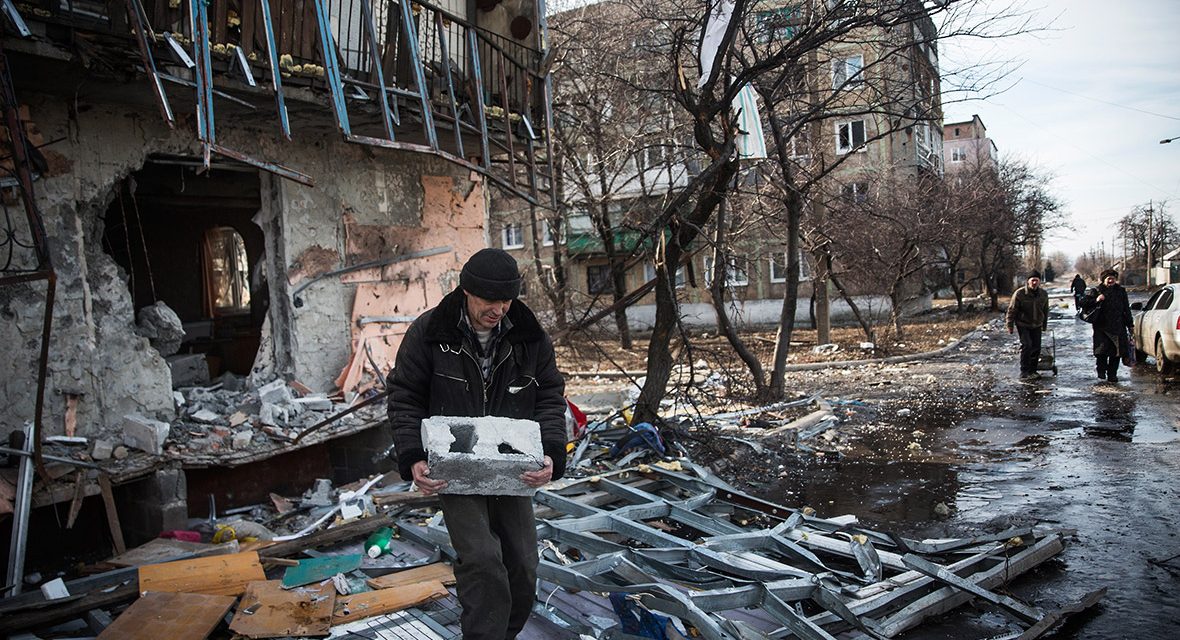 The Union of Communists of Ukraine (UCU), a communist party banned in Ukraine, published a statement on the war in their country on SolidNet, subsequently republished in English on The Defense of Communism site on July 12, 2022.

The following is a summary of the party’s analysis, which closely follows the classical Marxist view of imperialism.

The UCU characterizes the war in Ukraine as a clash of two imperialist alliances: One led by the United States, and the other led by Russia.

The UCU contests the reasons offered for war on both sides.

From the Russia side, the party disagrees that the war “is in the interests of ‘Russians,’” or for the “‘protection of the Russian-speaking population’” in Ukraine, or for the “‘denazification’ of the Ukrainian state.” Instead, it is “in the interests of Russian capital, which has sensed the danger and a necessity for the creation of new international conditions to provide further opportunities for profits and the growth of its capital.”

From the Ukrainian side, the war is not “about ‘the Ukrainian nation,’” or “‘the Ukrainian language and culture,’” or “even about ‘European values.’” In the party’s view, it is a war pursued by the EU, Ukraine, and North America, under US-leadership, “to destroy the economic and political power of the Russian bourgeoisie.” The “interests or rights of Ukrainian workers” are not a consideration. On the contrary, they are abridged and damaged by the war.

“Both Ukrainian and Russian workers in this war have only the right and obligation to go to the front and die so that one group of the world bourgeoisie defeats the other and gains more monopoly rights to oppress the workers, both in their own country and in the defeated countries.”

The war offers nothing of value to working people of the world. Indeed, the “consequences of this imperialist war … are catastrophic for the proletarian masses of all” countries. “A world war cannot but have world consequences: hunger, impoverishment, unemployment, and falling wages are already pacing the planet.”

Energy and food prices are increasing as a direct consequence of the war. This has, in turn, led central banks to tighten money supplies to control inflation. The predictable consequence of central bank action is to tip economies into recession and visit further economic pain on working families worldwide.

Almost 50 million people have been pushed to the brink of starvation since the war began, as disruptions to grain supplies and soaring transportation costs push food prices out of the reach of the poor. At the same time, real incomes around the world are falling as wages stagnate and prices rise.

As bad as these sequelae of the war are, a calamity of far greater significance lurks in the wings.

“The development of the military conflict in Ukraine has shown that its leading trend is its escalation into an open clash between the two imperialist blocs: Russia and its allies on one side, and NATO on the other side. This means the escalation of the war into a nuclear conflict and the emergence of a real threat of annihilation of humankind.”

The UCU invokes the classical Marxist view of imperialism as a system of rivalry among capitalist powers to dominate markets, raw materials, investment opportunities, and strategic territory. The “competition of capital inevitably leads to crises and wars.” Thus, the competition of capital must be eliminated to reduce the chances of humanity’s annihilation.

“The UCU sees the way out of imperialist war for the working class not in abstract calls for peace and disarmament (which, at best, can only provide a reprieve from war for the parties to build up forces for an even fiercer clash), but in the need to eliminate capitalism as a parasitic and destructive social system, in which the competition of capital inevitably leads to crises and wars.”

To that end, the party proposes to turn the international war into a civil, or class, war, echoing Lenin’s slogan. At the same time, it appeals “to the Russian workers” to do the same, viz., “to turn the imperialist war into a class war against the power of capital and for the communist revolution.”

“The only thing we can oppose to the bourgeois nationalism …. which pits peoples against each other in war, is proletarian internationalism,” the party argues.

For Party Democracy and Party Transparency

Resolution of Solidarity With Cuba

I saw this statement and Stephen Gowans’ summary earlier and do not agree with it. (Right, who am I to disagree with a statement like this?) Note that the statement is from the “Union of Communists of Ukraine,” not the Communist Party of Ukraine.  There are a couple of areas that I think are open to challenge: 1. The current war seems to be equated to WWI by viewing it as a war between imperialist powers (“two imperialist blocs”) in which workers have no stake. Rather, a better analogy I think is WWII, where the Soviet Union came under direct… Read more »

Ok so the war is “a war pursued by the EU, Ukraine, and North America, under US-leadership,” Ukraine “pursued” it by getting invaded? Sounds like the war pursued them. “Pursue” is such a weasel word, to imply that Ukraine asked to be invaded and for masses of their people to be murdered, deported and maimed. The Ukrainian bourgeoisie is being murdered and displaced by Russian bullets and bombs. What a dishonest and ridiculous apologia. At least you have the decency, for once, to recognize Putin’s Russia as an imperialist power. I guess that’s a start at breaking from pre-1989 two-worlds… Read more »

Last edited 4 months ago by Foofoo
-1

Cold War One was not about defending Europe from Russian aggression, but rather ensuring American economic domination of Western Europe. Cold War Two is the same. The Germans will have to buy much more expensive American LNG, whether it impoverishes them or not.
The Fascist regime in Kiev, put in power by an American CIA coup, had already killed 13,000 Russian speaking civilians in Donbass since 2014. Was not Putin morally obligated to defend these people?