A new study shows that the U.S. economy has finally produced more jobs than there were before the Great Recession of 2008. The problem is, they’re mostly bad jobs in fast-food restaurants and low-wage retail.

The National Employment Law Project found that there are almost two million fewer good paying jobs than there were back in 2008, but also close to two million more jobs in the low-wage sector of the economy – meaning, most of the new jobs have been bad jobs.

Actually, the change in the jobs picture during the Great Recession was just a speeded up version of what capitalism has been producing in the United States for more than 30 years. It is by design. Every time employers have turned the screws on labor, in terms of wages, benefits and jobs security, Wall Street has rewarded those companies. The Lords of Capital have also richly rewarded the politicians from both parties for removing the remaining obstacles to the direct rule of the rich.

Capital’s global plan is to reduce all workers to a state of absolute insecurity, so that they will accept those bad jobs without complaint. That requires the destruction of what we used to call the social safety net – a term that sounds increasingly quaint in the dog-eat-dog environment engineered into the system by Wall Street.

Make no mistake about it: austerity is the common program of both the business parties. That’s why you will hear no countervailing vision from the Democrats, whose message differs from Republicans only in tone, not in substance. Both answer to the Lords of Capital.

Barack Obama, the great actor and political chameleon, pretends to commiserate with his Democratic minority and working class constituents. Like his mentor, Bill Clinton, Obama claims to feel their pain. Yet, he is feverishly working to pass trade treaties that will further establish the legal structures of the global race to the bottom – treaties so blatantly biased towards corporations and against every principle of democracy and national sovereignty, that the language must be kept secret.

However, the main problem for American workers isn’t that Wall Street’s economic and social plans are secret – because, for the most part, they’re not. Big Capital’s intentions have been quite clear for decades. The NAFTA trade treaty has been savaging U.S. factory workers and Mexican peasants for 20 years. The Democrats were in power when the banks were set free to loot and plunder 15 years ago.

Every employment study has tracked the steady decline of union membership, which the Democrats have done virtually nothing to reverse. That’s quite understandable since finance capital has steadily increased its campaign contributions to Democrats. None of this has been a secret, and no one should be surprised that, as a result, most new jobs are bad jobs. As far as Wall Street is concerned, that’s good news.

What makes the current era different from the past, is that neither of the business parties even bothers to pretend that it has a plan for a good jobs society. That means the people must put forward their own plan, through their own organizations – and learn to avoid the Democrats, whose job is to nip genuine people’s movements in the bud, so as not to disturb the corporate order. 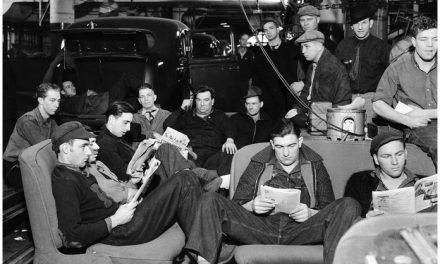