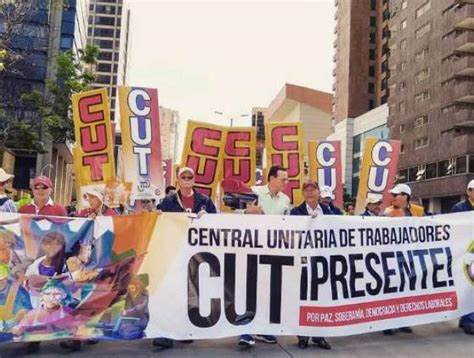 In the midst of a deep crisis of dependent capitalism and the collapse of the oil rentier model, both aggravated by aggressive imperialist measures and a government policy package that seeks a pro-capital recovery strategy, Venezuelan workers are being punished by a terrible deterioration in our material living conditions.

This programme is fundamentally characterised by economic liberalisation and deregulation; dismantling of state control over prices, costs, profits and exchange rates; privatisation of state enterprises, including those of a strategic nature; a regressive tax policy that frees up the tax burden of large capital and forces wage earners to pay consumer taxes; and a workplace policy that destroys the value of the labour force and imposes mechanisms that deregulate labour relations.

This labour policy package implies creating conditions for over-exploitation and employment precariousness; extreme wages and pension reduction (the national minimum wage and the average pension currently amount to less than £20 a month); deterioration of workplace health and safety; and the dismantling of collective bargaining agreements, among other historical conquests gained by the Venezuelan working class.

The neoliberal adjustment programme, which is taking place in the midst of unchecked inflation and de facto dollarisation, is being implemented by the government through a pact between oligarchic elites that allows the government to govern in order to develop anti-worker, anti-popular and increasingly anti-democratic policies with the justification of confronting the imperialist blockade and criminal sanctions. It looks to attract foreign investments and stimulate existing investment (both foreign and national), guaranteeing investors maximum profits by lowering labour costs and exempting them from tax obligations. At the same time, it looks to reduce public spending and diminish the state’s dominance in the economy.

As a function of this, authorities are facilitating open and simulated dismissals in both the private and public sectors, and have green-lighted the derogation of economic clauses in collective bargaining agreements in accordance with Ministry of Labour-issued guidelines (memorandum-circular 2792) and the fraudulent use of provisions set out in the Labour Law (article 148). Recently, the National Budget Office (ONAPRE) issued instructions that drastically and unilaterally reduced wages for public and state administration personnel, violating constitutional rights and guarantees as well as international labour standards ratified by the Venezuelan state.

In order to implement this anti-worker labour policy, the bourgeoisie and the government count on trade union groups devoid of class consciousness, both the leading (and badly named) Central Bolivariana Socialista de Trabajadores (CBST) [Bolivarian Socialist Workers’ Confederation] and those of the complacent opposition right-wing which lead several trade union confederations affiliated to the pro-imperialist ITUC. With this bureaucratic apparatus, elitist mechanisms of class conciliation and the legitimising of neo-liberal policies advance.

The dismantling of labour and social rights goes hand-in-hand with the imposition of free-market tyranny, widening the gap of social inequality. In addition, state authoritarianism is applied to neutralise or destroy any hint of resistance and class struggle against such policies.

To this end, the government’s intervention and control over social organisations look to destroy any independent and autonomous action of the organised working class and the working people in general. In this way, the right to strike is curtailed and bosses and the state continually resort to anti-union practices of persecution, criminalisation and prosecution of workers’ leaders who defy them. Even simple workers who dare to denounce acts of corruption in state institutions end up being prosecuted and imprisoned.

As is often the case, the imposition of highly unpopular neoliberal policies is accompanied by repressive mechanisms and the curtailment of democratic freedoms. The irony, which for many is highly confusing, is that these policies are carried out under the cover of rhetoric that appears “revolutionary” and “anti-imperialist” and justified by the need to confront the imperialist blockade and criminal sanctions. But in Venezuela, there are very few who believe such political balderdash.

The reality is that since around 2014, the government of Nicolas Maduro began to dismantle the progressive Bolivarian process that had been initiated by President Chavez. Although, it must be said, the objective causes of the current crisis lie in dependent capitalism and the rentier-oil model of capital accumulation, which has never been overcome.

In this context, the need for maximum unity to revive and channel the struggles of the working class and the people in general in a revolutionary way is obvious. That is why we are putting our greatest efforts into activating unity of action processes with various trade union organisations, fronts, movements and working-class currents in order to fight for better conditions, for the restitution of rights and gains that have been vilely stolen, and in order to accumulate forces to prepare the sweeping offensive of the Venezuelan workers’ movement.

This offensive must open the way for higher objectives that the working class and the working people must set for themselves: to take the national leadership into our hands, to make a real socialist revolution, to defeat imperialism and its shameful lackeys, and to call out deceitful reformists who, with their deceptions and manipulations, do deep damage to the proletariat’s revolutionary struggle.

The CPB’s and YCL’s Defend the Workers! Material Aid for Venezuela’s Class Struggle campaign looks to generate funds to purchase technological equipment to the CUTV. Please donate what you can through bank transfer or cheque to the Communist Party of Britain (Acc. No. 50725694, sort code 608301) putting reference Viva 2022 (important!). Contact 07521464927 or info@communistparty.org.uk for more information.

This article originally appeared on July 21, 2022 on the Communist Party of Britain website.

The military in Latin America have a national and nationalistic role and nation-wide responsibility . Latin America never had aristocracies or clans with roots into centuries past. For the logistic in the massive spaces the military remains the one nationwide functioning authority, disaster relief organization and security agency. The elected “revolucion” of Chavez had been and remains a nationalistic movement with roots into the military past. It first manifested itself in the 1950’s when Nixon was not really “shielded” by the military when he visited Venezuela. See videos : NIXON IN CARACAS . In the 1960 the bourgeoise political parties… Read more »