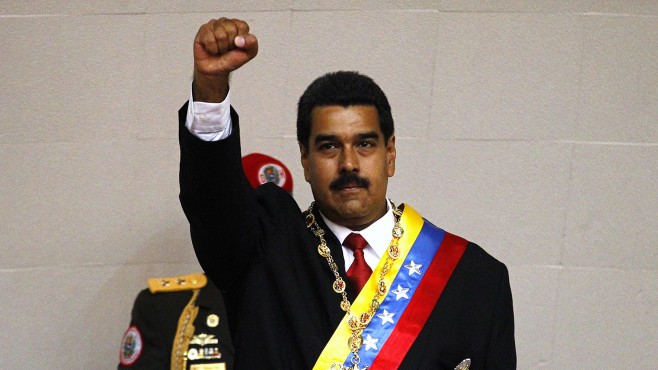 President Nicolás Maduro spoke July 25 at ceremonies honoring Venezuelan socialist leader Jorge Rodríguez, assassinated by government forces 40 years earlier. As shown by a story featured on web sites of the Venezuelan and Colombian Communist parties, Maduro held up a copy of the Venezuelan Communists’ Tribuna Popular (Popular Tribune) newspaper and gave voice to its banner headline “Resist and Advance.” That’s the “slogan of the moment,” he pronounced. Reading from the newspaper, Maduro praised the words of Oscar Figuera, secretary general of the Venezuelan Communist Party. An article on Figuera’s views appeared on page 13 of that newspaper for “July 14 to August 3, 2016.” (Readers may view a video presentation of Maduro’s remarks at https://www.youtube.com/watch?v=9iNcky2nLYE )The article on Figuera carries the title: “For Revolutionary Solutions to the crisis.” (Por salidas revolucionarias a la crisis) The entire article may be read in Spanish by presenting this web address to a server: https://prensapcv.wordpress.com/2016/07/27/video-nicolas-maduro-recoge-consigna-del-pcv-resistir-y-avanzar/#more-10665      An English-language version follows:

Guanare– The proposals that the Venezuelan Communist Party (PCV) presents to President Nicolás Maduro are for “revolutionary solutions to the crisis and not for solutions [gained] though agreements with big capitalists,” stated Oscar Figuera, secretary general of the PCV.

“The PCV doesn’t support measures like lifting price controls, giving expropriated companies back to the capitalists, while excluding laborers, workers, and country people from the process of direct production,” emphasized Figuera, who also serves as a deputy for the PCV in the National Assembly.

Figuera pointed out that, “we will not support measures that do not strengthen people’s power, but we will continue to follow President Maduro because we recognize the imperialist bullying he is subject to. Our position is unconditionally joined to the people and the workers; but we are not with the government unconditionally. We are allied for the sake of fashioning better arrangements.”The Communist deputy added that that the Bolivarian process of change during 17 years succeeded in carrying out a better and more equitable distribution of income from petroleum, but didn’t succeed in building a strong productive apparatus.”

In the country the capitalist system is maintained intact, and that’s what is in crisis because it’s based on mono-production, mono-exportation, and multi-importation. The government created companies that bear the name ‘socialist,’ but none of this can exist while the working class and laboring people don’t hold political power and while we are not changing the character of the state,” observed the leader.

Figuera let it be known that the national leadership of the PCV [presently] is undertaking a national tour throughout the entire country, meeting with regional and local committees of the Communist organization. They are also meeting with diverse political and social forces in order to advance the idea of building a solid worker and people’s revolutionary bloc that contests the power of the neo-fascist right and of sectors inside the executive prone to surrender. “

“On these trips, we’ve also learned first-hand about the economic and social realities citizens are confronting in all states of the country. The people are suffering hardships through several combined factors: for one thing, the work of imperialism and big capital aimed at destabilizing the government’s management of affairs, and for another, the accumulation of mistaken policies under the leadership of the [current political] process,” declared Figuera.

In this context, the leader reiterated the approach the PCV had adopted in regard to President Maduro in order that the space of political dialogue might be opened up among forces that defend the process of change and its achievements favoring the people.

For the Party of the Red Rooster [Venezuelan CP] , political and economic responses are required in order to reconstruct the productive apparatus under a collective leadership in which workers, toilers, and peasants, the community councils, and the people may participate.

Finally, as regards the next regional elections, Figuera reaffirmed that the PCV will be looking toward the unity of the Great Patriotic Pole. He added that, “we do not dismiss the possibility of presenting our own candidates in alternative alliances, in case proposals are presented that are contrary to our principles or that don’t strengthen the process.”

Colombians and Europeans Say Peace Accord is Imperiled