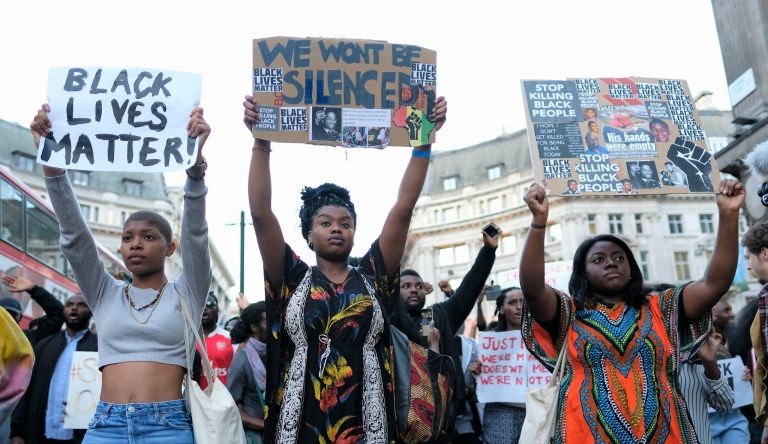 This week we’re revisiting selections from our 2016 series ‘With Love and Respect: #ScholarsRespond to A Vision for Black Lives,’ edited by Keisha N. Blain and Ibram X. Kendi. Today we’re featuring an essay by Gerald Horne.

As I was reading the illuminating document inspired by Black Lives Matter, I was in the process of reviewing a new book by Orde F. Kittrie. What strikes me about this enlightening document is how decisively it breaks with the rhetoric and platform of the Cold War Consensus, as represented by the NAACP and a good deal of the Congressional Black Caucus. Nowadays, it is quite unusual for our mass organizations and leadership to provide useful analyses on the pressing global issues of the day, be it Syria or Ukraine or North Korea or the earthshaking rise of China, to cite a few burning issues among many.  This willful ignorance is too often the case, though these priority concerns of U.S. imperialism could easily devolve—if we are not careful—into planetary extinction.

As myself and other historians have noted, more than a half century ago, U.S. imperialism made an agonizing retreat from the more egregious aspects of Jim Crow in return for a passel of anticommunist concessions extracted from our liberal organizations and leadership 1. The price of the ticket was the sacrifice of our most globally minded leaders, which has left our community ill-prepared to confront the era of globalization, robotization (which as things stand now, is pointing toward a jobless future), mass incarceration and destabilization of those who are objectively our allies.

One of the many ironies of the Obama presidency is that his most supportive constituency—African Americans—have been unhelpful in confronting the White House’s most intractable crises, including those foreign policy matters listed above, because of the corrupt bargain negotiated to erode Jim Crow. President Obama has noted repeatedly that the aftermath of the disastrous 2011 campaign to oust the Libyan regime was the “worst mistake” of his administration (though I would argue that the ouster itself was the error) 2. Ironically, Barack Obama’s opposition to George W. Bush’s misadventure in Iraq propelled his political career—then he committed a similar crime in Libya. I do not infer that Obama is a hypocrite or contradictory (though I will not dispute strenuously those who argue otherwise). My own view is one that should also rivet BLM advocates: the balance of forces among the hegemonic Euro-American majority is so rightward—as exposed by their voting patterns—that even the ostensibly well-intentioned are dragged down by them, absent countervailing force.

I well remember debating pro-Obama listeners on KJLH-FM—Stevie Wonder’s L.A. radio station—in early 2011 with my interlocutors not seeming to recognize that a president makes decisions based on the correlation of forces, not necessarily his personal predilections alone. With hawks per usual baying for African blood and tipping the scales in favor of war, those who were sincerely pro-Obama would have done him a service by raising their voices stridently against yet another cataclysm in Africa, saving this White House from its “worst mistake.”

This brings us back to the “Movement for Black Lives,” their just and righteous demands and how such came to be. Simply by acknowledging the obvious “M4BL” (as it styles itself), has soared miles ahead. That is, their platform asserts that “patriarchy, exploitative capitalism, militarism and white supremacy know no borders. We stand in solidarity with our international family against the ravages” of the aforementioned, including “human-made climate change” and “war.” These brave and insightful words break decisively with the “married-to-the-mob” mentality that has dominated our leadership heretofore, which has argued implicitly that “we will not object to how imperialism’s booty is obtained, as long as we get our cut.”

This global outlook is all the more necessary since—contrary to widespread opinion—the creation of the U.S. was no leap forward for humanity but instead was a successful settlers’ revolt, not unlike what befell what became Zimbabwe in November 1965 3 and just like the latter, 1776 too was opposed by Africans who realized that their enslavement was at the root of the conflict 4. And, ever since, in order to advance, the community now known as “African-Americans,” has had to rely heavily upon international solidarity5—precisely what was relinquished objectively in the wake of the post-May 1954 dispensation.

This suggests that those truly interested in progress and liberation on these shores must not neglect our allies in the international community, particularly since the Euro-American majority tends to lean to the right (as befits a nation whose origins mimic Rhodesia’s).  This also suggests that M4BL should devise a global analysis and strategy that indicates who our allies and antagonists might be. This further suggests that M4BL and its constituent components should become a regular presence at the United Nations in Manhattan; the Organization of American States in Washington, D.C.; CARICOM in Georgetown, Guyana; the African Union in Addis Ababa. And I daresay, Moscow, Havana, Beijing and even Brussels (I realize that this thrust has occurred nowadays to a degree; I am simply suggesting it be systematized). This also means that BLM should become a regular presence on global media networks, including RT-Moscow; CCTV-Beijing; TELESUR-Caracas, Radio South Africa, PressTV-Teheran; etc.

And this brings us to “Lawfare,” the portmanteau that has arisen, driven in part by the rise of power blocs challenging U.S. imperialism, along with the rise of instantaneous communication and supersonic transport, to denote a new legal order that allows BLM to file suit not just in courts of this nation but abroad as well in friendlier climes. As this book argues—which is actually a manual for neo-conservative activists but can be turned in judo-like fashion in our favor—the rise of “universal jurisdiction,” which allowed a Chilean dictator to be detained in London at the behest of a Spanish magistrate for crimes committed in his homeland, has opened new legal doors.

In 2011, George W. Bush declined to visit Switzerland for fear of facing a similar fate. Property held by U.S. miscreants abroad can be attached. What about a reparations suit in a foreign court that attaches U.S. property as an essential element of the claim? As Kittrie notes, Israelis and Jewish-Americans have been quite successful in litigating claims against Palestinians and Iranians alike in U.S. courts.

Of course, this approach is not for the fainthearted, nor for those who simply do not understand the concept of the correlation of forces globally. But, of course, this descriptor does not apply to BLM, nor M4BL. Most assuredly, this does not describe those like Shirley Graham Du Bois, who alongside Kwame Nkrumah, sought to rally newly independent Africa on our behalf, or Paul Robeson and William Patterson who more than sixty years ago sought to drag the U.S. into the dock of the United Nations on a documented charge of genocide against our people, or Frederick Douglass, who spent more time in London, when  the British were a deadly antagonist of Washington, than Robeson or Patterson spent in Moscow.

Fortunately, our community is blessed with skilled advocates with substantial experience abroad: I think of attorneys like Stan Willis in Chicago and Roger Wareham in New York City who have substantial experience, inter alia, in bringing our cause before the United Nations. The National Lawyers Guild and the National Conference of Black Lawyers—both of whom I once served when I was an attorney in the trenches—can also be relied on.

There is one more point: decentralization has served BLM well; among other things, it has hampered the usual ruling class tactic of decapitating leadership of our organizations. However, BLM and M4BL may want to engage in tentative experiments with centralization, including a national convention that democratically elects leadership (both national and regional) with a dues-paying membership. On the other hand, I recall vividly a similar debate that erupted in the anti-apartheid movement during its heyday and as things played out, decentralization—which allowed for the eruption of local struggles in municipalities and campuses nationally—worked well alongside the centralization embodied in Trans-Africa; the American Committee on Africa; the Washington Office on Africa; and Robeson’s Council on African Affairs.

Whatever route pursued by the beautiful strugglers and warriors of BLM and M4BL in coming days and years, you should know that graybeards like myself stand in strict solidarity with you.

Gerald Horne holds the John J. and Rebecca Moores Chair of History and African American Studies at the University of Houston. Horne received his Ph.D. in history from Columbia University and his J.D. from the University of California, Berkeley and his B.A. from Princeton University. His research has addressed issues of racism in a variety of relations involving labor, politics, civil rights, international relations and war. One of the nation’s most prolific and influential historians, Horne is the author of more than thirty books. 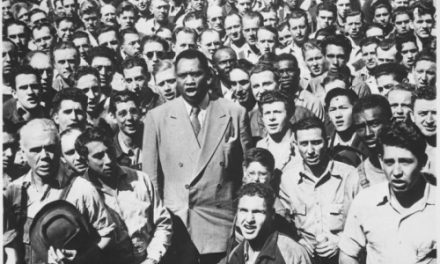