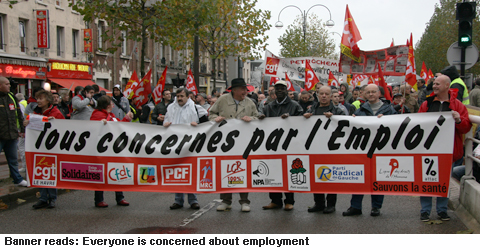 The boss of world car maker Nissan  — arrested and under intense surveillance around his luxury mansion, and charged with gorging himself with about $140 million of unauthorized pay[1] — makes a daring escape from under the nose of Japanese authorities and across half the world. It will take months for details of how Carlos Ghosn ran away to become public, and probably years to verify which of them are true and which are diversionary stories. However, the lessons about global capitalism are already plain to see.

* Ghosn rose up the managerial ladder at vehicle maker Renault in France by showing his mettle as a ruthless exploiter of labor. His nickname, Le Cost Killer, was well earned.[2] At the Renault factory in Flins, workers must stay at their station the entire eight-hour shift with two ten-minute toilet breaks. They burst into tears because they cannot help wetting their clothes. Nearly half the workers are on temporary contracts that run one to three months.[3]

* When Japanese car maker Nissan was on the verge of financial collapse in 1999, it formed a loose alliance with Renault and received an investment. Renault obtained about 40 percent of Nissan — and installed Ghosn as the boss.[4] It was a major break for Japanese industry to accept a foreigner as chief. Ghosn laid off 20,000 and closed factories, which got the profits flowing again.

* Several years ago Ghosn began to push for a complete merger of Nissan and Renault in a consolidating global industry. But it seems the exploiters could not agree how to divide the profits. Nissan generates most of them, and high Japanese executives and Japan Capital in general feel that Renault wants too big a share.[5]

* Ghosn kept up the merger drive. This is the real reason, he says, why he was arrested and charged with plundering Nissan of undeclared money, putting luxury mansions in Japan, France, and Brazil on the corporate tab, and hiding a murky deal with Saudi businessmen.[6] Ghosn countercharges that he is a victim of selective prosecution, asserting that executives in Japan do this stuff all the time.

* Unable to squeeze Ghosn to leave the scene quietly, the Japanese government released him on bail after four months in jail, re-arrested him last April, and largely confined him to his mansion. Ghosn could not have a phone or use the Internet, and his wife could not visit him.[7] Ghosn’s trial was to begin in April 2020 but then was put off to autumn 2020 or even into 2021.

* Ghosn had enough. With his wealth and global connections, he put together a bold plot. Somehow Ghosn left his house despite 24-hour surveillance by several cameras. He allegedly took a private jet to Istanbul (chartered under a false name),[8] changed to another private jet without going through Turkish arrival and departure clearances, and flew to Beirut, Lebanon, the city where he grew up and where he apparently enjoys government protection and presidential affection.

While the press debates the inhumane procedures of Japanese courts and confinement versus the illegal flight of Ghosn, it gives little attention to the fact that the Ghosn-Nissan-Renault affair is a clash among thieves over the profits sweated from hundreds of thousands of workers. For twenty years the press adored Ghosn for his talents at exploitation.

The escape drama underlines that the globalization of corporations, production, and supply chains does not create a unified capitalist class. Just the opposite, the battle of capitalist interests becomes global, too.

Despite intellectuals who chatter about the surpassing of national sovereignty[9], state power remains more important than ever. Ghosn found refuge in Lebanon. Japan and Lebanon have no extradition treaty. State boundaries define limits of coercive state power, a reality that currently infuriates Japanese authorities.

Incidentally, the detail about workers forced to urinate in their pants was published by a mainstream newspaper in Japan almost a year ago, when the capitalist media there were in the process of removing Ghosn’s crown.

Hollywood will most likely make a suspense thriller about Carlos Ghosn’s escape. The movie might portray the contention between capitalists, but it will hardly underline the fact that it is all a fight over the spoils of exploitation. The Godfather is a brilliant epic showing that the mafia reproduces big business in miniature, but the first part in particular hides what the mafia is about: it extorts small businesses, preys upon working people susceptible to the vain hope of gambling and the doomed refuge of drugs, and hires out thugs to employers when workers want to unionize.

There is no greater drama than socialist revolution. Hollywood has yet to make a movie about how Lenin got out of tsarist-imposed exile in neutral Switzerland during the First World War and traveled with associates in a special closed train to Russia shortly after the revolution of 1917 began. History will tuck Carlos Ghosn away in a footnote — and see new triumphs on the path that Lenin took.

[9] See for example, Peter Wilson, “The end of sovereignty,” Prospect, March 24, 2016 at https://www.prospectmagazine.co.uk/magazine/the-end-of-sovereignty