The divide in Colombia between poverty-stricken rural masses and landed ruling elements is famous for leading to serious conflict. Farmers, agricultural workers, truckers, and traditional miners revived that pattern on August 19 as they launched a nationwide agrarian strike. Government repression, true to form, was not lacking.

Some farmers gain reasonable livelihoods from sales of food products. Others, whose markets are precarious, are often little more than subsistence farmers. Characteristically they live in peripheral regions inhospitable to commercial agriculture. One of them is Catatumbo department where in July small farmersshort on land and state services organized protests that, in retrospect, anticipated the national strike.

Suffering pervades all rural areas: Over 50 percent of rural people are poor, 25 percent of them extremely so. Murders and population displacements at the hands of the police, army, and paramilitaries are endemic. Social services, especially schools and health centers, are usually far removed

The strike entailed highway blockades and demonstrations in at least 17 departments. Continuing, it focuses on free trade agreements (TLC) Colombia signed with the United States, Canada, the European Union, and South Korea. Demonstrators looked to the “Table of Agrarian Discussion” (MIA) for leadership, which came largely from the two-year old Patriotic March. That coalition of 1500 social and political organizations organized 60 percent of the strike actions.

This outburst of rural discontent, here stemming from wealthy Colombians and multinational corporations collaborating to exploit land has precedents: Striking banana workers were massacred in Ciénaga in 1928; “people of the plains” rose up in the 1930’s; land reformers backed people’s advocate Jorge Eliécer Gaitán, assassinated in 1948; and armed peasants defended agrarian communes in 1964. As the FARC, they moved on to civil war. Indeed, agrarian rights are the prime discussion point in negotiations in Cuba now between FARC guerrillas and the government to end that war.

Urban mobilizations drew upon city residents forcibly displaced from rural areas. Over many years Colombia’s rural – urban population mix had shifted from a 70 percent – 30 percent distribution in the 1960’s to the converse. Demonstrators’ close ties to rural antecedents were evident on signs that read, for example, “Colombia, affirm your peasant heritage,” and, “Soldier, friend, your grandmother is in the country.”

The government cast strikers as “vandals” and their leaders as criminals. As with other high- visibility political opponents, authorities attempted to link strike leaders with the FARC. Charging arrested leaders with “rebellion and terrorism,” they resorted to long discredited material allegedly taken from the computers of murdered FARC leader Raul Reyes, or publicized accusations from FARC deserters. MIA spokesperson Huber Ballesteros, imprisoned since August 25, became an emblematic victim and object of international solidarity. He is vice president for the large Fensuagro agricultural workers union whose offices the police ransacked.

By August 30, at least 200,000 Colombians had mobilized, hundreds of demonstrators were wounded, some 500 arrested, and nine killed. On September 4, thousands of peasants rallying in southern Cauca confronted troops who wounded dozens of them and killed four. Strike activities were ongoing in sixteen departments, highway blockades in 6 of them.

Critics say TLC’s favor large farm operations allied to multinational corporations at the expense of smaller farmers and food sustainability. Circulation of YouTube versions of Victoria Solano’s documentary “No mas 9-70” helped make food sovereignty a strike demand. The title refers to a 2010 regulation on seed certification the government implemented as preparation for TCL’s. It opened the door for genetically modified seeds. Food sovereignty is no trivial issue in a country where 8 million people are hungry, including 13 percent of Colombian children who suffer from acute malnutrition and another 15 percent who are chronically malnourished.

By negotiating with big farmers located on fertile land in Boyacá, Cundinamarca, and Nariño, the Santos government sought to divide the mobilization. On September 7 those producers withdrew from the strike in return for stop-gap measures like tariff modifications (disallowed in two years under the TLC), subsidies, and repeal of resolution 9.70.

One day later in Popayán, Cauca, after “two hours behind closed doors,” the government and MIA leaders agreed that highways blockades would end nationwide by September 10 and that a government commission would discuss with MIA its original six points. United Nations representatives, present as observers, and Colombian notables would verify compliance Vice President Angelino Garzón headed the government’s negotiating team.

The MIA and government met in Bogota on September 11 to discuss guarantees for a future negotiation process. But President Santos convoked a meeting there on September 12 aimed at promoting his government’s National Pact for Agricultural and Rural Development which he had unveiled on August 30. The MIA stayed away.

MIA and Patriotic March spokesperson Andrés Gil indicated that “while we will enter a process of negotiation with the government … We feel that we are not represented in the Pact convoked by the government.” Indeed, “We are going to make our own pact,” declared Patriotic March activist Danilo López from Ibagué: “The government is convoking a pact for its [own] class, the class that has generated misery, poverty, and dispossession of so many peasants from their land.”

Consequently, strike organizers launched a “National Agrarian, Peasant, and People’s Summit.” Some 2,500 representatives from participating groups were on hand, also in Bogota, also on September 12, to ratify a political declaration.

It claimed that across town, “the big owners and investors want to ally themselves with small producers to appropriate their work and their sweat …Different governments have projected an economic model designed to favor landowners, ranchers, and transnational businesses and disregarded the great majority of small farmers, the indigenous, and Afro-Colombians …Mobilization has not finished. The powerful exercise of people’s power on the road of collective construction is on course.” At the time, strikers were continuing in the streets and on highways in Nariño, Boyacá, Córdoba, and elsewhere. Students wanting a free, high-quality education were joining them.

For leftist commentator Horacio Duque Giraldo, these tumultuous weeks signified that, “Colombia has seen one of the most powerful mobilizations in its history. Highway blockades and public demonstrations represent new forms of struggle and another level in collective political action. No longer will politics be the monopoly of the parties and worn-out state institutions.” 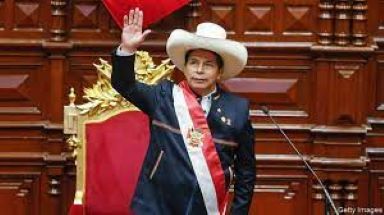