I thank you for your presence here this morning, on a day a saturated with news.

As you know, President Raúl Castro Ruz paid his respects yesterday at the Montaña Garrison, in the mausoleum where the remains President Hugo Chávez Frías were laid to rest, to this great leader of Our America, a man of extraordinary scope, a special friend of Cuba.

The Cuban President also attended an impressive civilian-military parade, which demonstrated the strength of the Venezuelan people’s unity with the National Armed Forces; the Bolivarian Revolution’s combativity; and the people’s determination, repeatedly and democratically expressed in successive elections, under conditions in which they must face violent, destabilizing actions on the part of the fascist right wing, which is attempting to obstruct the self-determination of the Venezuelan people.

The legacy of Chávez is foremost in the feelings of the Venezuelan people defending inalienable conquests, gained at the cost of more than 200 years of struggle and historic sacrifices.

I reiterate here the full, invariable, permanent solidarity of Cuba with the Bolivarian Republic of Venezuela, facing a destabilization effort, facing an attempt to violently overthrow the government, facing foreign intervention and interference, especially by the United States government.

The violent acts have caused deaths, many injuries, destruction of public property and have prevented Venezuelan citizens from exercising their rights, which should be strongly condemned.

Cuban collaborators, as was expressed yesterday during the march, will continue to fulfill their duty and will share the fate of the heroic Venezuelan people, under any circumstances.

I would like to express our strong condemnation of the resolutions approved by the U.S. Senate and House of Representatives, and the intervention attempt made by the Organization of American States, to which, as is known, Cuba will never return.

Venezuela has every right to defend its independence and sovereignty.

Secondly, as President Raúl Castro Ruz stated on February 22, “The intervention of Western powers in Ukraine must cease, to allow the people to legitimately exercise their right to self-determination. It should not be ignored that these acts could have very serious consequences with respect to international peace and security.” End of quote.

Subsequent events have demonstrated, and demonstrate, the seriousness and continuing relevance of that statement.

It is not acceptable to violently overthrow a constitutional government, at the cost of dozens of deaths and injuries, by way of intervention by the U.S. and some of its NATO allies, by way of threats to the physical safety of Ukrainian citizens because of their national origin, and the destruction of institutions, political parties and legitimate, legally recognized entities.

Those who today threaten the Russian Federation with sanctions and reprisals are the very governments which precipitated the regime change in Ukraine, which have launched wars of conquest, interfered directly or indirectly in the internal affairs of various states which do not accede to domination and defend their sovereignty and independence.

Cuba rejects this hypocrisy, the double standards, and the clearly aggressive NATO actions and statements with respect to the issue.

History will hold the United States and its allies responsible for the consequences of an increasingly offensive military doctrine implemented beyond the borders of the North Atlantic Alliance, threatening the sovereignty and independence of all states, without exception, which constitutes a flagrant violation of international law and the United Nations Charter.

The attempt to extend NATO’s reach to the Russian Federation’s borders constitutes a serious threat to international peace, security and stability.

A third issue: President Raúl Castro Ruz stated on February 22, I quote, “More than a few analogies can be found in non-conventional war manuals, which were implemented in various countries of our Latin American and Caribbean region, as is occurring in Venezuela today, and some with similar features have been in evidence on other continents, first in Libya and currently in Syria and Ukraine. Any one who has doubts about this, I would invite to leaf through the U.S. Army Special Forces Unconventional Warfare Training Manual 18-01, published in November 2010, entitled Non-conventional War.” End of quote.

A high-ranking White House national security official wrote in August of 2011, I quote, “The new U.S. strategy is more efficient and less costly. That of the Bush administration considered occupation; that of Obama is one of national liberation, via the development of a national movement. The strategy of military intervention in Libya could be applied in other cases.”

Given that none of you have published any thing about this, I reiterate the invitation to do so.

The U.S. Defense Department issued U.S. Army Special Forces Unconventional Warfare Training Manual 18-01, on November 30, 2010. It describes the implementation of subversive operations meant to attack and undermine the morale or political, psychological, economic and military strength of the adversary; its cohesion and effectiveness; to distance a government from the population, undermining the governmental power by promoting the idea that it is incapable of governing effectively; utilizing the support of an ally or third country to weaken and discredit a government; divide the population and generate discontent; influence or create leaders and unify them ideologically; utilize émigré communities; provoke catalyzing events and create conditions to justify an intervention with the use of propaganda, demonstrations, boycotts and sabotage, even in the absence of declared hostilities, in an effort to gain concessions and erode the government’s capacity so that a popular uprising against the presidency can overthrow the government in question.

I ask, can the U.S. government and NATO guarantee that the use of force and these concepts of non-conventional war are not applicable, and are not being implemented in Venezuela, Cuba and other Latin American or Caribbean countries, a region recently designated a Peace Zone during the 2nd CELAC Summit? What opinion does the European Union have of this? What will the United Nations do?

Those who have illusions about the success in Cuba of this type of warfare and of paid internal agents will come up against a Revolution which knows how to defend itself – against the political power and sovereignty which our people exercise as their principal victory.

One final issue: On February 10, I received a letter from the European Union’s High Representative for Foreign Affairs & Security, the honorable Baroness Catherine Ashton, with an invitation to initiate negotiations on a political dialogue and cooperation agreement between the EU and its member nations, on the one side, and Cuba.

This long road began with a similar proposal made by Cuba to the EU in 1988, 26 years ago, when diplomatic relations were established between the European Communities and Cuba, which had until that point always been rejected.

In 1996, the president of the Spanish government, José María Aznar, during a meeting of EU Finance Ministers, hastily imposed a unilateral policy, the English draft of which had been sent to Washington, as has been reported.

In 2003, the European Union attempted to impose uncivilized, inapplicable sanctions on Cuba, which rejected any type of cooperation with the EU and cancelled our request to ascribe to the Cotonú Convention on relations between the EU, Asia, the Caribbean and the Pacific.

In January of 2005, the EU temporarily, they said, suspended those sanctions against Cuba which they were never able to implement.

In 2007, a dialogue and cooperation agreement was signed with the subsequent Spanish government.

In June of 2008, the EU decided to unconditionally withdraw the inapplicable sanctions and invited Cuba to a process of political dialogue and to reinitiate cooperation.

In October, 2008, the bases for the high level dialogue were agreed upon. These fundamentals establish the talks as being of an unconditional, reciprocal and non-discriminatory nature, with full respect for the sovereign equality of all states, for the legal framework and institutional order of both parties, and full adherence to the principle of non-interference in the internal affairs of states.

Five sessions of the high level political dialogue between the EU and Cuba have taken place.

Fourteen EU member countries have signed bilateral agreements of cooperation and memoranda of understanding with Cuba, all completely reciprocal and respectful.

I must state that Cuba was pleased to receive the February 10 proposal from the High Representative, which indicates an end to unilateral policies toward Cuba on the part of the European Union. Cuba accepts the initiation of said negotiations, of which we have just informed the EU ambassador in Havana.

I thank the High Representative Baroness Ashton, EU member states and the European Commission for their efforts which led to this proposal.

I reiterate that Cuba will approach the coming process in a constructive manner and believes that the aforementioned principles, those which I have cited, are fully relevant and must continue to guide our relations.

Unilateral policies, such as those implemented by the United States government against Cuba, principally the economic, political and media blockade, stuck in the Cold War era, violate the human rights of Cubans, cause incalculable human damage, seriously affect our economy, our well-being, our standard of living and our development and constitute an act of genocide. They do not work, will not work, are not working, and are condemned to failure. 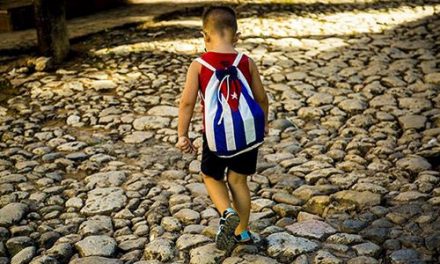