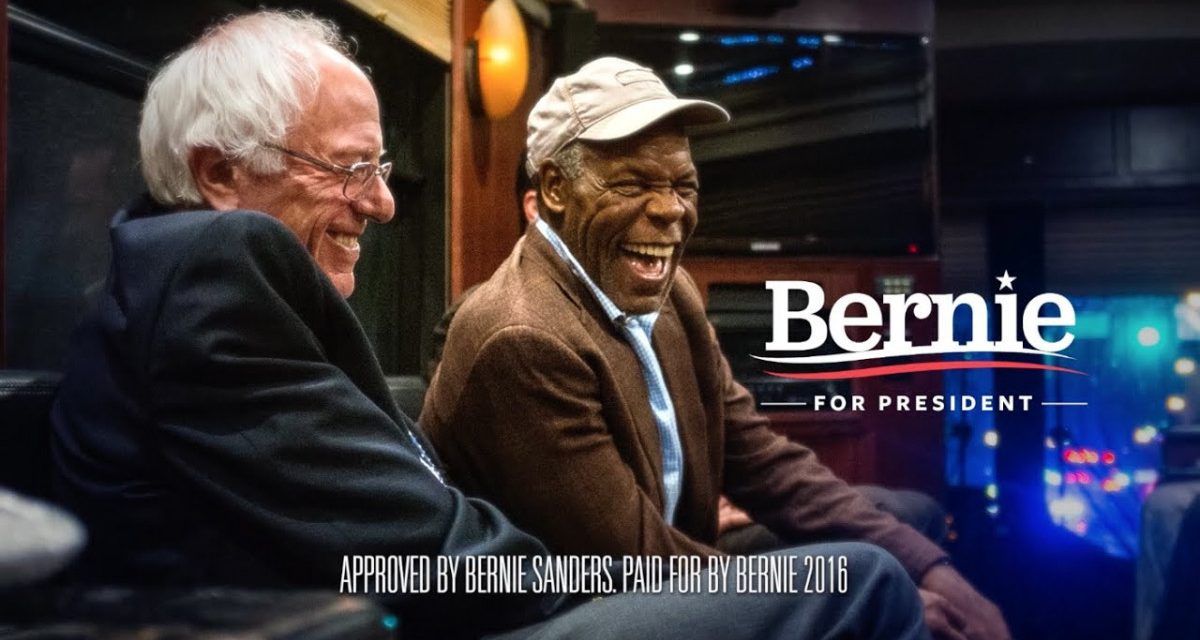 Supporter of Bernie Sanders for President and for single payer national health insurance.

As it turns out, Glover is the civil rights face of corporate liberalism.

I didn’t believe it when I first heard about it this week.

But then, reality was just a few Google clicks away.

Danny Glover supports single payer. He was a major supporter of Bernie Sanders for President. Single payer would effectively eliminate the insurance industry.

Throughout his career, Glover has been a strong supporter of traditional Medicare and single payer national health insurance.

Last year, Glover narrated an hour-long PBS documentary – Power To Heal: Medicare And The Civil Rights Revolution – chronicling the historic struggle to secure equal and adequate access to healthcare for all Americans.

Central to the story is the tale of how a new national program, Medicare, was used to mount a dramatic, coordinated effort that racially desegregated thousands of hospitals across the country, all in a matter of months in 1966.

That Danny Glover would never betray the single payer movement by working for a  Medicare Advantage insurance corporation to undermine traditional Medicare, right?

Glover has been starring in ads for a Medicare Advantage insurance company – Assurance IQ.

“Hi I’m Danny Glover with an important message for anyone on Medicare,” Glover says in one such ad. “I’ve done a lot of action movies over the years and I know you are never too old for good health care. Many of you may qualify to save money or receive additional Medicare approved benefits at no additional costs. But listen. You don’t get these savings or additional benefits automatically. That’s why I recommend getting a free, no obligation Medicare benefits review from Assurance. They can see whether you are eligible for new benefits like free eyeglasses, prescription drugs, at home tele-health visits and over the counter allowances.”

“You may be eligible for zero dollar monthly premiums, zero dollar deductibles, or no co-pays.”

“I’ve gotten banged up enough to know that health care benefits are important for everyone. And that’s why I trust a licensed Medicare agent at Assurance. They will look up what plan you are on and provide a free, no obligation Medicare plan review and answer any questions you have. Call now and make sure you are getting all of the Medicare benefits you deserve.”

Glover should know that Medicare Advantage undermines traditional Medicare and rips off seniors.

A September 2018 report from the Inspector General of the Department of Health and Human Services found that Medicare Advantage regularly denies claims and that when patients appeal those denials, the Medicare Advantage plan reversed three-quarters of their own denials.

The numbers were troubling because of the infrequency with which patients and providers used the appeals process – just one percent of those denied care.

“For these organizations to keep funds entrusted to them that were designated to pay for health care services that were actually delivered is worse than thievery because it is on such a massive scale,” said Dr. Don McCanne of Physicians for a National Health Program at the time of the release of the report. “This is racketeering at its worst.”

Diane Archer of Just Care USA was surprised to hear that Glover was making ads for a Medicare Advantage company.

“Danny Glover is an ally who supports Medicare for All,” Archer said. “Medicare Advantage and all private health insurance drives up costs and jeopardizes access to care. Traditional Medicare is the far better choice.”

And the idea of a civil rights icon involved in a racket to sell substandard insurance to the African American community rankles many within the movement.

Or as one single payer activist put it in the same meeting — “Medicare Taking Advantage of African Americans.”

Glover would never do ads for big pharma, right?

Glover starred in ads for the pharmaceutical company Avanir Pharmaceuticals pushing a red pill called Nuedexta, which was approved to treat a disorder marked by sudden and uncontrollable laughing or crying – known as pseudobulbar affect, or PBA.

In May 2017, the New York Times ran a picture of Glover laughing under the headline – How a Drug to Treat Crying Sent Sales Soaring.

“An overhead light drawing attention to his face, the actor Danny Glover drops his head into one hand and starts to cry,” the Times reported. “Then, he abruptly switches to deep belly laughs, before resuming a straight face.”

“‘When I act, if I do this, it’s totally in my control,’” he says into the camera. ‘But for someone with pseudobulbar affect, choosing to cry or laugh may not be your decision.’”

“The 60-second TV advertisement, aired widely until late last year, has raised questions about the role of direct-to-consumer advertising – typified by ads that call on you to ‘ask your doctor’ about possible treatment — in promoting the use of medicines for uncommon conditions far beyond the narrow population of people who most benefit from them.”

A CNN investigation in October 2017 found that Avanir was raking in hundreds of millions of dollars a year as it aggressively targeted frail and elderly nursing home residents for whom the drug may be unnecessary or even unsafe.

Now that the Democrats control the Senate, the House and the White House, they are pushing hard for single payer national health insurance, right?

The inside the beltway public interest groups, those who profess to be in favor of single payer, are behind the Democrats in pushing for single payer Medicare for All, right?

Sanders has yet to introduce his bill into the Senate.

Instead, Sanders and NPIC are pushing for Medicare for Some – decrease the Medicare age to 60 and expand benefits.

Just this week, seventy-seven organizations that support single payer, including Public Citizen, MoveOn and Indivisible, sent a letter to Senate leaders to support Medicare expansion – aka Medicare for Some.

No mention of single payer Medicare for All.

Liberals would point to Bernie and Danny and NPIC as the best the our corporate system has to offer.

That of course means that change will come from somewhere else.

Not inside the beltway.

Not Bernie or Danny.

Once again, from the ground up.

But to paraphrase Danny in Lethal Weapon: 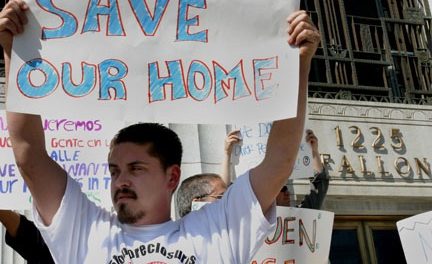 Protest Over the Auction of a Foreclosed Home

Myths about the Crisis. Response of KKE and the Class-oriented Labor Movement.