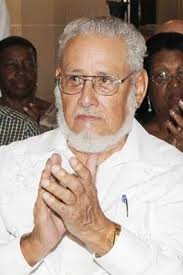 Jorge Risquet was like the brother I never had.

We had been working together since 1994. He had been selected by Fidel and Raúl Castro to oversee my access to the closed Cuban archives, and he headed the declassification commission that was created for my research on Cuban policy in Africa. Ours began as a good professional relationship.

I appreciated Risquet’s intelligence, his profound knowledge of Africa, his sense of humor. It was pleasant to work with him, and it was useful: Risquet was an incisive critic and on many occasions he helped me understand that my analysis of certain aspects of Cuba’s policy in Africa was mistaken.

With the passing of time, my respect and admiration for Risquet turned into a friendship that became ever deeper. For more than two decades, for me he became a brother, the only brother I ever had. The void his death has left in my life is immense.

Others will describe Risquet’s distinguished participation in the Youth of the Cuban Communist Party, how heroically he resisted the torture when he was captured by Batista’s police in late 1956, his actions in the Sierra Maestra at Raúl Castro’s side, and many other episodes of a beautiful life.

Here I want to remember that part of Risquet’s life I know very well: the role he played in Africa as the representative of Fidel Castro and the Cuban Revolution. Risquet’s African journey began in July 1965, when Fidel chose him to lead the Cuban column he would send to Congo Brazzaville.

I don’t want this remembrance to be too long. I will simply say that Risquet and his column carried out perfectly the task that Fidel had assigned them: they saved the country’s progressive government from a military coup – and they did so without shedding a single drop of blood.  They carried out the first polio vaccination campaign in the history of Congo Brazzaville, and they gave military training to the guerrillas of Agostinho Neto’s MPLA. This was Cuba’s first link with the MPLA.

But Risquet’s name will be forever associated with Angola, even though there are some Angolans who now want to silence the glorious role Cuba played there from 1975, when the first Cuban soldiers arrived to repel the South African invasion (encouraged by Washington), until 1991, when the last Cuban soldiers returned home. Throughout, Risquet was Fidel Castro’s point man for Angola. As such, he had to confront not only the Americans but also the Soviets.

As I write these words, two moments come immediately to mind. The first, Risquet’s encounter with General of the Army Valentin Varennikov, the third highest ranking officer of the Red Army, in December 1983. They met in Luanda at the headquarters of the Cuban military mission. “After the customary exchange of courtesies, we turned to the business at hand,” Varennikov wrote in his memoirs. “Risquet started to speak first, and I did not object, but when it was my turn, I remarked, as if in jest: ‘And to think that I had naively believed that I would speak first because I am the guest.’ Risquet countered: ‘We do not consider a Soviet general to be a guest among us.'”[1]

The discussion that followed sheds light on Cuban-Soviet relations in Angola, on how the Cubans dealt with their Big Brother, and on Risquet’s ability to be simultaneously tough and diplomatic. Risquet began by recalling that in November 1982 Andropov had told Castro “that our relations must always be frank, honest and loyal. He said something that Comrade Fidel liked very much …: ‘We must not fail to tell a truth or express an opinion just to avoid an unpleasant moment.’ … With you, now,” he told Varennikov, “I will follow this principle.” And, on behalf of Raúl Castro, he began administering a tongue-lashing to Varennikov for the flawed military strategy that the Soviet Military Mission was advocating in Angola.

He spoke with subtle irony, with intelligence and bluntly. “I told you, a few days ago, about the friendship and fraternity we feel for the Soviet Union,” Risquet reminded Varennikov, “how we see in the Soviet military our teachers, our brothers, and how much your military expertise has meant for Cuba. But I also told you that we have had disagreements [in Angola]. … We want to make it very clear, comrade General of the Army, that the Cuban military command will not be dragged into any adventure. … We are responsible for the lives of our soldiers and cannot allow them to be sacrificed without reason.”

Risquet concluded: “You can be absolutely certain, dear comrade General of the Army, that if the South Africans attack the line that we are defending, we will fight fiercely without any hesitation, but know with equal certainty that we will refuse to endanger even a single Cuban life in an operation we consider ill-advised, wrong-headed and unrealistic. … Believe me, comrade General of the Army, it is very unpleasant to have to speak in this way. We understand how uncomfortable this must be for you, who bear no responsibility for what has happened. … We see the Soviets as our brothers, but we consider it necessary to tell you all this so that you will return to the Soviet Union with a complete and full understanding of the views of our Minister of Defense.”[2]

Risquet always stressed in our conversations that all he was doing was to carry out the instructions of Fidel and Raúl; but he failed to add that he did so with uncommon intelligence, brilliance, and eloquence.

This eloquence, intelligence and brilliance were much in evidence when Risquet led the Cuban delegation during the 1988 quadripartite negotiations (among South Africa, the United States, Cuba and Angola) to attain peace in southwestern Africa. The decisive round occurred in Cairo, in late June 1988. By then the Cuban troops had defeated the South African onslaught against Cuito Cuanavale in the southeast of Angola, Cuban columns were advancing in the southwest toward the Namibian border, and Cuban MIGs were flying over the skies of northern Namibia.

The Cairo round was the last time that the South Africans proposed their ludicrous demands: the simultaneous withdrawal of their troops and the Cuban troops from Angola, a government of national unity of MPLA and Savimbi in Luanda, and the postponement of any discussion over the independence of Namibia. These demands were absurd because, as Raúl Castro said a few days before the Cairo round, Cuba had “flipped the tortilla”[3]: the Cuban troops had achieved superiority over the army of apartheid in Angola, and the Americans and South Africans knew it.

It was Risquet, eloquent, passionate, a master in the art of sarcasm, who dominated the Cairo round. “A document devoid of both seriousness and realism such as that presented by the South African government is a tasteless joke,” he said, referring to the demands presented by the South African delegation. “The era of your military adventures, of your despoliations carried out with impunity, of your massacres of refugees – as in Cassinga in 1978 – and of similar crimes against the people of Angola, this era has ended. … The South Africans must understand that they will not win at this table what they have failed to win on the battlefield. …They cannot act like victors when they are in fact an army of aggressors that is battered and in retreat. The South Africans want to know the exact number of Cuban troops in Angola and where they are stationed. This is not information one gives to the enemy. Let them try to get it on the battlefield.”[4]

After the last plenary session, the head of the US delegation, assistant secretary of state for Africa Chester Crocker, sought out Risquet. Crocker seemed to believe that arrogance was a useful virtue for a US diplomat. He was accustomed to dealing with Angolan officials, whom he lectured and upbraided. But now he was facing a Cuban, a representative of Fidel Castro, whose soldiers were marching toward the Namibian border. For Washington and Pretoria the pressing question was,” Would the Cubans halt at the border?”

This is why Crocker sought out Risquet. “My question is the following,” Crocker told Risquet: “Does Cuba intend to halt the advance of its troops at the border between Namibia and Angola?’ Risquet replied, “I can’t answer you. I can’t give you or the South Africans a Meprobamato [a well-known Cuban tranquillizer] … I am not saying whether or not our troops will stop. …. Listen to me, I am not threatening. If I told you that they will not stop, it would be a threat. If I told you that they will stop, I would be giving you a Meprobamato, a Tylenol. I want neither to threaten you nor to reassure you … What I have said is that the only way to guarantee [that our troops stop at the border] is to reach an agreement [on the independence of Namibia].”[5]

Some in Cuba criticized Risquet for speaking so harshly to Crocker. Of course, there are times when one must speak softly – but at other times it is necessary to be harsh. Risquet understood, when talking with Crocker, that this was such a moment because only the fear of the victorious Cuban troops advancing into Namibia would force the United States and South Africa to accept the just demands of Cuba and Angola.

He was right. Looking back at the Cairo round, and his encounter with Risquet, Crocker lamented: “Reading the Cubans is yet another art form. They are prepared for both war and peace … We witness considerable tactical finesse and genuinely creative moves at the table. This occurs against the backdrop of Castro’s grandiose bluster and his army’s unprecedented projection of power on the ground.”[6] It is true, Risquet was carrying out the instructions of Fidel and Raúl – but he did it so well!

And now this man so noble, so generous, so devoted to the revolution and its leaders, has died. Cuba has lost a great man, and I have lost my brother.