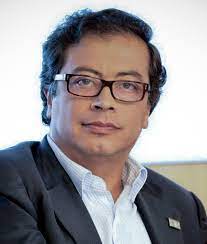 Campaigning in Colombia began January 15 for congressional elections on March 13, and for first-round voting for a new president on May 29. Gustavo Petro, leader of the progressive Humane Colombia movement, will likely be the Historical Pact coalition’s presidential candidate.

A former urban guerrilla, congressional representative, mayor of Bogota, and now senator, Petro ran for president in 2010 and in 2018, when he lost to current president Iván Duque in second-round voting. Duque is not running for re-election.

Petro led the opposition against former president and extreme right-winger Alvaro Uribe (2002-2010) who is accused of corruption, narcotrafficking, and ties with paramilitaries. Duque is Uribe’s protégé.  As president, Uribe prioritized war against the Revolutionary Armed Forces of Colombia (FARC) and later opposed the government’s peace agreement with the FARC.

The Historical Pact is a coalition of left-leaning and centrist parties and of “social movements, indigenous people, feminists, environmentalists,” according to Petro. Coalition partners include the Communist Party and the affiliated Patriotic Union on the left, the Alternative Democratic Pole and Humane Colombia representing social democracy, and centrist anti-Uribe groups. Joining these are politicians who backed Juan Manuel Santos, who succeeded Uribe as president and promoted the Agreement.

Observer Felipe Pineda Ruiz suggests that, “most of those voting for the Historical Pact … are more to the right than are the activists and candidates.”  Also, “as traders and small business people, they gained real economic benefits from the commodities bonanza … that sustained economic growth when Santos and Uribe were in power.”

Gustavo Petro registers 34% approval in a recent opinion poll, down from 40% in October. The favorability ratings of the other top-polling candidates range from 32% to 7%.

The Historical Pact’s election campaign follows more than two years of seesawing protests and repression. The associated turmoil has shaped the constituency Petro is appealing to and leaves an aftermath the next government will be dealing with. It has exacerbated Colombia’s longstanding rural-urban divide, a major impediment to a just society there.

Along the way, 200,000 troops and riot police wounded and/or arrested, and killed, protesters. Demonstrations continued intermittently in cities well into 2020. The government’s inept handling of the Covid -19 pandemic was a new grievance.

The Bogota police, reacting to the burning of their facilities, killed taxi-driver and law student Javier Ordoñez on September 9, 2020. Huge crowds assembled the next day. The police killed 14 young people and wounded hundreds more. Demonstrations culminating September 21 in a “national strike” would continue intermittently for the rest of the year. A government tax increase was a further provocation.

Colombian historian Renán Vega Cantor notes that, “State terrorism in the Colombian style became visible to the world.” For him, the “extraordinary national strike was the most important social protest in Colombian history in terms of duration … and the diversity of social sectors that participated.”

Attitudes were changing. Before the protests, “the bombings, massacres, torturing, disappearances were of little interest for residents of middle-class districts. For the rich and powerful they simply did not exist and did not matter.” For “the urban middle classes, state and parastate violence” was faraway and “to some extent was justified to confront security threats or insurgent movements in the countryside.”

Now there was violence in the cities. Vega Cantor mentions “80 Colombians killed by agents of the state, hundreds wounded, dozens disappeared, and a score of women raped.” He describes armed civilians protected by the police showing up in districts of the wealthy and “acting as if to protect their interests from intruders, Indians, Blacks and the poor.”

Observer Fernando Dorado states that the Historical Pact campaign “has to maintain the people’s enthusiasm expressed in the social explosion … and in parallel fashion must attract sectors of the so-called ‘center’ in order to isolate and defeat recalcitrant right-wing forces.”

As the campaign looks for votes from urban population sectors, it shows no sign of attending to injustices, resistance, and longstanding repression in rural areas. That approach may end up reinforcing Colombia’s rural-urban divide.

Historical Pact officials have fixed it so that voters are not readily exposed to class-oriented viewpoints. The coalition is using the “closed list” voting system for the congressional elections in March. There, each candidate of a partnering group appears on a list, with preferred candidates at the top. Voters need only select the coalition of their choice; they don’t get to choose a candidate.

The object ostensibly is to assure an equal number of female and male candidates and allow for indigenous and African-descended candidates. There will be no contests between, for example, a centrist party and a leftist one like the Communist Party or the Patriotic Union, certainly not on ideological grounds.

Electoral politics that doesn’t involve working-class power challenging plunder by oligarchs will remain distant from the realities of Colombia’s countryside.  There, the deaths of hundreds of thousands of people relate in one way or another to struggle between rich and poor over the use and control of land. Vast numbers were killed in the 1950s in the wake of Jorge Eliécer Gaitán’s assassination in 1948, and again from the 1960s on as the Colombian state reacted to the founding of the FARC, an agrarian insurgency.

That phase ended with the government’s Peace Agreement with the FARC in 2016, following which a “Third Cycle of Violence” commenced. Writer Horacio Duque points to more than 1300 mainly rural community leaders and some 300 former FARC combatants killed between then and now.

Blame, he states, lies in part with the government’s failure to carry out agrarian reforms as specified in the Peace Agreement. The Historical Pact’s program mentions agrarian reform, but a Petro government’s likely priority given to cities anticipates neglect of the countryside.

Similarly, Colombia’s military will probably remain untouched, despite the coalition’s promise of “structural reform.”  With a lot to protect, Colombia’s landowning elites, leery of agrarian revolt, have long sought military capacity.  Now the country’s military consumes 12% of the government’s budget. With 295,000 troops, it’s the second largest military force in Latin America. With no working-class power at the center of governmental decision-making, military control over rural Colombia will likely continue.

The coalition’s statement on “New International Politics” rejects foreign intervention, but is silent on the U.S. role as the Colombian military’s senior partner. The brazen nature of current arrangements reflects the bullying power of U.S. interventionism nourished by global capitalism. An outmatched Petro government probably will not disturb them.

Current U.S. activities include: an annual monetary contribution ($461.4 million in 2021), air bases distributed throughout Colombia, U.S agents there charged with destabilizing Venezuela, and preparation of Colombian troops for special tasks. Some of these are: training the security forces of U.S.-allied nations, fighting their wars (in the Middle East, for example), and performing dirty work, such as assassinating Haiti’s president on July 7, 2021.

This note finishes on a note of tragedy. Much-needed restoration of rural life in Colombia is a distant dream. The rural poverty rate in 2019 was 34.5%, in the cities 12.3%. Learning levels between same-grade children in urban and rural areas differ by three years. Illiteracy in rural areas is more than twice that in cities.  In rural areas in 2016, stunted growth in children (as a measure of chronic malnutrition) was almost twice the rate for urban zones. The 1% of persons individually controlling the largest landholdings in Colombia together own more than 80% of all land there. Colombian inequality in land ownership is the greatest in Latin America.

And a touch of ambiguity: We’ve been harshly critical of the Historical Pact. But the election of Gustavo Petro as president of Colombia would be good news, or at least as much as is possible now.  He would be Colombia’s first progressive head of state. That’s no small matter.

CP of Turkey, Protests against Obama in Istanbul and Ankara