Led by Iraq and Afghanistan war veterans, 15,000 people took to the streets of Chicago to protest on May 20, the opening day of the NATO summit.

As the summit approached, the May 20 demonstration gained impressive support from many diverse groups, including Jesse Jackson and Operation PUSH, area unions including many SEIU locals, the Chicago Teachers Union, UE locals, National Nurses United, and many others.Â  Peace organizations, community organizations and Occupy groups from around the country supported the actions, as did groups from many countries around the world.Â

International anti-NATO fighters came from several countries and solidarity demonstrations were held in London and several other European cities as well as in Iran, India, Bangladesh, Russia and Canada.Â  Click here for pictures and reports of some of the international solidarity actions: http://nepajac.org/internationChicago.htm.

The march, organized by an ad hoc coalition called the Coalition against NATO and the G8 War and Poverty Agenda (CANG8), filled the wide Chicago streets from curb to curb for several blocks.Â  Those attending were predominantly youthful and energetic.Â

The march was led by the Iraq and Afghanistan war veterans who, at the end of the march, conducted a powerful and historic ceremony in which they threw their military medals in the direction of the NATO summit meeting where more wars in the interest of the 1% were being planned. There was also a moving reconciliation ceremony with some of the war victims being represented by members of Afghans for Peace.Â  Click here for the Democracy Now report of the medal ceremony: http://www.democracynow.org/2012/5/21/no_nato_no_war_us_veterans.

At the end of the ceremony, as organizers urged people to start leaving the area, long lines of police in riot gear started moving towards the stage, preventing many fromÂ  leaving.Â  Police pushed with their clubs into the crowd as people fell against the metal barricades erected to contain the demonstrators.Â

Soon the police were swinging their clubs at protesters in full view of the TV cameras and reporters; many people were hurt, some seriously.Â  These were not lone-individual, out of control cops; this was clearly a planned attack.Â

Perhaps it was needed by the city to justify the tremendous costs of the security apparatus used by the Emanuel administration, including months of pre-summit scare tactics and violence baiting protestors. But it was not the demonstrators who were violent, it was the police.Â  It is not peace activists who are violent, it is NATO.

UNAC first put in an application for a permit to march and rally in July of 2011. Five months later we were informed that there would be no protests during the summits.Â  But as a huge outcry developed, and after press conferences and protests organized by CANG8, Occupy Chicago and many unions, we were granted a permit.Â

During this period, UNAC placed a full page ad in the Chicago Sun Times with a statement in support of the right to protest signed by hundreds of people from the U.S. and people from 13 other countries.Â  During this period the Emanuel administration also proposed, and got passed, new restrictive ordnances governing protests. These were also protested by CANG8, Occupy and the unions.

For months leading up to the anti-NATO and G8 protests, the Chicago police and city administration urged people to leave the area and scared people with stories of how the protesters would be violent.Â  CANG8 representatives continually told people that we were holding a peaceful, family-friendly demonstration.Â  We organized Âpeace guidesÂ to ensure that the march and rally would happen as planned.Â  Up until the police attack on the demonstration at the end of the rally, it had been peaceful.

In the days leading up to May 20th, the police raided the homes of several demonstrators and made several arrests.Â  A total of around100 people were arrested in the week preceding the demonstration.Â  Three young men, now known as the NATO 3, were charged with very serious terrorism crimes.Â  It appears that this was a set-up similar to the preemptive prosecutions that Muslims have faced, as a provocateur was used in the same ways they are used to frame Muslims as terrorists.Â

For the Democracy Now segment on these charges: http://www.democracynow.org/2012/5/22/attorney_nato_3_activists_detained_on.
For Indymedia videos of the police attack: http://chicago.indymedia.org/node/946.
For pictures of the police provocateurs:
http://www.antiwar.com/blog/2012/05/22/pictures-of-second-nato-5-informant-gloves-published-for-first-time-on-antiwar-com/
http://truth-out.org/news/item/9273-more-nato-summit-activists-charged-five-linked-by-two-informants

Please donate to the defense of the NATO 3 by clicking here: http://www.wepay.com/donations/nato-arrestee-bail-fund.

Other activities during the week

Messages were read to the Summit from the Afghan Youth Volunteers and from Malalai Joya, an antiwar activist and former member of Afghanistan’s parliament, who was scheduled to attend the Summit and the May 20th demonstration but was sick and unable to attend.Â Â

Suraia Sahar, a member of Afghans for Peace based in Toronto read these messages. The Summit also heard from Mumia Abu-Jamal, who addressed the crowd from prison by phone.Â  Other speakers included, Kathy Kelly, Ann Wright, Abdul Malik Mujahid, a leader of the Muslim Peace Coalition, Occupy leaders, National Nurses United, and other union leaders as well as UNAC leaders and activists from other countries.

Following the PeopleÂs Summit, Occupy Chicago organized actions every day leading up to and during the NATO summit.Â  There were also actions organized by other groups as Chicago became a protest town during this period, with the media covering all the actions.

One very important action was a demonstration organized by the National Nurses United union.Â  This action pushed for a stock transfer tax, which would solve some of the countryÂs economic problems by forcing the rich to pay a share for the financial crisis they created.Â  This demonstration included several thousand nurses and their supporters. NNU also provided free buses for people to come to their demonstration and to the May 20th mass demonstration.

How did the protest come about?

Last June, a UNAC leadership meeting in New York City took note of the fact that both NATO and the G8 countries would be holding their summits in the U.S.Â  We did not know where they would be taking place, but we decided that we would make it a priority to organize opposition to these summits.Â  We felt that having both summits together was a unique opportunity to draw the link between the economic and military policies of the ruling 1%.

When it became known that Chicago would be the place, we sought permits and held a meeting in Chicago last August, where CANG8 was set up as an ad hoc coalition to organize for a mass demonstration and the PeopleÂs Summit.Â  Over the next months, many other groups joined the effort, and the actions were able to get broad sponsorship. Â

The May 20th demonstration was one of the largest antiwar demonstrations ever held in Chicago.Â  Most national antiwar demonstrations have been held in Washington, New York, or on the West Coast.Â  The distance from these large coastal population centers made it difficult to get people from these areas to Chicago, yet we were able to hold a large action and support a week of activity that created a discussion about the role of NATO and the G8.Â

The Chicago city and federal administrations went on a relentless campaign to try and keep people away by saying that we were going to be violent.Â  New regulations were proposed in Chicago to silence demonstrators.Â  At every stage we countered this with a campaign in support of our right to protest and for civil liberties.Â  This helped push back their attacks on civil liberties and will help all those who seek to have their voices heard.Â  However, it is clear that the violence baiting did play a role in scaring some people away from the demonstration.

By the time of the demonstration, all national peace and justice groups and coalitions, including UFPJ and ANSWER, marched together in the streets of Chicago, while the eyes of the world were on us, proving that the antiwar and social justice movements were alive and growing

The activists on the ground in Chicago did a great job of pulling together the demonstration and leading the fight in defense of our civil liberties and the right to protest. Their actions strengthened the movement in Chicago and nationally.

We made new international contacts that will strengthen and broaden UNAC and the U.S. antiwar movement in the future.

UNAC will now move forward helping to build actions at the national political conventions and on Oct 7, the anniversary of the beginning of Afghanistan war.

In New York on June 17th, we will join with the NAACP and others to demonstrate against racial profiling and Stop and Frisk practices.Â  We will continue to fight along with our Muslim brothers and sister against Islomophobia and against the wars at home and abroad.Â  Join us! 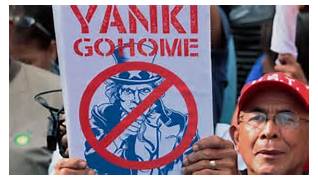