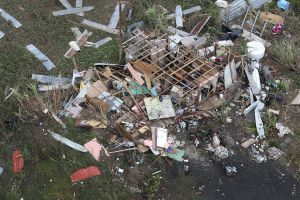 Puerto Rico is not large enough to stand alone. We must govern it wisely and well, primarily in the interest of its own people.

Let those words sink in.

Three and a half million people are without power, water, fuel, food, and support. This isn’t some uninhabited atoll. This is where I grew up. This is where my family lives. This is my home.

And my home is dying.

I have been desperately trying to come up with the right words to express what I feel and what I think for the better part of a day. My social media has as of late provided me with a space to write my remarks, observations, and more often than not, rants about the situation on Puerto Rico. I shared my anxieties when hours, then days passed without a word from my family. I cried in silent sobs at the pictures that slowly started to come out of the island. Despair began to unite the large Puerto Rican diaspora as we comforted each other, and waited as the absolute silence became more and more unbearable.

“Have you heard from…”

“Does anyone have any information about my hometown…”

It was only last Friday when I had proof of life from my family in my hometown of Arecibo. And it was on Sunday that I was finally able to speak to them over the phone. Speak… more like share moments of absolute joy and tears of happiness. Of feeling born again. And with that memory fresh in my mind, I sat down to write.

Nothing came except tears. I’m crying as I write this.

How can one put into words how it feels to be completely powerless as the world I’ve always known slowly turns into Hell for those that I love the most? How can one fully express in words that could convey, in any way, the overwhelming sense of constant pain, of horrible uncertainty, the fear of loss, and the fury over what is, in the end, an unnatural disaster? And how can I live with myself for not being there?

How can I explain to people that Puerto Rico, my home, my island, my heart and soul, is dying?

The fear of death is an eternal companion in these situations. So as my country slowly agonizes, would it be appropriate for me to write a eulogy for its seemingly inevitable death? Perhaps some choice words as a send-off to the oldest colony in the world?  As Donald Trump, the biggest psychopath to occupy the Oval Office so far, finally relents to growing public pressure and announces that federal funds will be made available in full to Puerto Rico, and as more aid slowly makes its way to the island, could I dare hope for a stay of its execution? Or is this just another delay in its pre-ordained death-by-empire?

President Trump’s message to Puerto Rico was clear: pay up and drop dead. The island is expected to pay its imaginary debt for the dubious “privilege” of being an imperial colony in the way it’s always done so: in blood. Wall Street’s interests have priority over securing the very survival of nearly four million people. God forbid that millionaire Wall Street bondholders suffer the horror of payment forfeiture over a minor inconvenience like Hurricane María, only the worst storm in eighty years!

The president initially denied full federal assistance to the island and refused to suspend the Merchant Marine Act of 1920, or Jones Act, that has for nearly a century strangled commerce to and from Puerto Rico. Because of this stubbornness an obviously colonial World War One-vintage piece of legal protectionism continues to choke the island as its inhabitants are left to fend for themselves. Colonialism is a self-perpetuating state of exception that thrives on crises precisely because the beneficiaries are always the colonizers and their local flunkies who maintain and benefit from the illusion of “self-governance.”

While Homeland Security steadfastly holds on to its refusal to wave the Jones Act, Herr Trump was later forced by public pressure to amend his remarks on aid, and the USNS Comfort hospital ship is now scheduled to arrive on the island in three to five days (as will our bloviating commander-in-chief himself at some point) any help received from the American imperial mainland now carries with it a stigma, a sense of being a discarded, second-hand lifeline. This is extremely revealing. It’s been over a week since Hurricane María cut a path of destruction in Puerto Rico nearly beyond the scope of living memory, a week that passed before Trump made any remarks at all. It was a week filled by hysterics over kneeling, Russia and North Korea, a week of forgetting that Puerto Rico even existed.

American colonialism is not just confined to its territories or its Native American population. A successful empire can choose to either exalt itself to its population, thereby becoming an object of national pride, or hide itself by dulling that population’s senses and intelligence, negating that it has an empire in the first place. The United States pursued the second path. Successfully, I might add. Puerto Rico’s imperial masters also relied on their own profoundly ignorant population on the mainland that, fueled by the systemic racism on which the United States is built on, and a blinding allegiance to patriotism, considered Puerto Ricans to be just another group of Hispanic vermin. To this day nearly half of Americans do not even know that Puerto Ricans are “fellow citizens”, at least in name. And make no mistake. The white supremacist regime that attacks NFL players and Black Lives Matter activists for having the nerve to protest is the same regime that established the fiscal control board, the biggest killer in Hurricane María’s wake. These things are directly related, and the fiscal control board’s austerity measures ensured that it has blood on its hands.

The United States has perfected its colonialism on the island of Puerto Rico to such a degree that when it decided to take away the island’s limited self-rule, the vaunted “commonwealth”, and instead installed a fiscal control board, it did so with the applause of many islanders. Many Puerto Ricans, conditioned by school, church, political party, and kin to accept their inferiority to the gringo as natural law, felt unfit to govern themselves. We so desired to be our masters that we welcomed punishment for engineered transgressions tailor-made by vulture capitalists in the metropole and on the island itself.

And then came María. The other killer phenomenon to approximate María’s devastation and raw power was Hurricane San Felipe II, in 1928. Yet María’s devastation attacked an island that, in many ways, was in worse shape than the relatively pre-industrial Puerto Rico of the 1920’s. Hurricane San Felipe was nature’s killer. Hurricane María, however, has only exposed colonialism’s murderous true self. There is nothing natural about this killer.

María found the perfect target: an island whose infrastructure was crippled by decades of colonial neglect, the product of an idled and corrupt political class that blindly follows orders from Wall Street and Washington. These quisling parasites, like the island’s cravenly telegenic current governor Ricardo Rosselló, coasted to power on the artificiality of petty political partisanship fostered by the main political parties on the people for decades in order to divide and lord over a population lulled by consumerism, Christian conservatism, and Cold War-era paranoia.

Now that same political apparatus has fallen apart. Long lines await supplies and fuel that are not being delivered. Two deaths were reported at an ICU when its generator failed, drained bone-dry as its diesel fuel never arrived. Governor Rosselló has been busy with a nonstop photo op tour since the hurricane passed. His Facebook page and Twitter account are filled with photos of his smiling face. But it is all smoke and mirrors. More and more mayors are voicing their rage at the lack of supplies. Whole shipments of supplies and fuel await distribution.

The situation has laid bare the reality that there was never a plan put into place. It has also revealed that FEMA has utterly failed in its role. San Juan Mayor Carmen Yulín Cruz, acting in every way much more responsibly than our delusional governor, has denounced that FEMA has done the impossible to tie up any aid effort with red tape, asking for interminable memos and paralyzing aid distribution. It is quite telling that at one point in an interview journalist David Begnaud, who’s done a commendable job covering Puerto Rico, briefly mistakenly calls Mayor Yulín “governor”. Deep down, though, I’m sure that when he caught his slip and corrected himself he wished that his momentary lapse would have indeed been fact.

This official paralysis and complete disregard for reality often leaves first responders and National Guardsmen mobilized to help with distribution literally empty-handed. And this crass stupidity is not limited to help on the national level. Cuba has offered help in the form of doctors and a brigade of electrical workers to help shore up and rebuild the island’s ravaged infrastructure. Cuba! Yet cruelly, but predictably, the American government denied them entry on political grounds.

FEMA’s (in)actions border on being criminally negligent, even going as far as kicking roughly 400 refugees out of the San Juan Convention Center in order to conveniently take it over as their center of operations alongside the Puerto Rican central government. Federal and local agencies have become shining examples of feckless inaction, fetid bureaucracy, and unfettered bullshit. In typical Trumpist fashion, FEMA’s response has been to accuse the media of biased reporting, but the true bias is self-evident.

Puerto Rico is dying, yes. It is a victim of the stupidity of its political class and the racist vindictiveness of its colonial masters. Colonialism will always be a humanitarian crisis.

But Puerto Rico isn’t dead yet.

In fact, something seems to be happening. The lack of governmental aid, the realization that American aid is essentially a fantasy, the uncalled-for curfew that’s tailor made to pacify anxious shareholders stateside and not help the citizenry, and the need to rediscover communal bonds of mutual aid have done something to Puerto Ricans. I confess to standing in awe of the newly found resilience, the furious indignation turned into action, and the unbreakable bonds of basic humanity that have returned with a vengeance. And with it comes a growing sense of indignation, of anger towards our colonial masters. Anger, blessed anger, the engine of political and social change par excellence.

Puerto Rico is dying, but if it survives this and rises once again, it may do so inoculated from the diseased colonial mentality that has crushed its collective spirit for so long. It’s a long shot, but it’s worth thinking about now more than ever. This national tragedy has made Boricuas remember that they can, in fact, do things on their own together. That the often-remarked bravery of Puerto Ricans that many feared lost by colonialism’s savage indoctrination (I confess to being amongst those that felt this way) was always there. That fury and indignation lead to freedom. Like many fellow Puerto Ricans that live in exile, we have come forward to join that life-and-death struggle for our homeland, and we do so together, always loyal.

As the white imperialist invader revels in his pettiness and apathy it becomes clear that the Puerto Rican people must resist and fight back in the best way possible: by surviving and thriving together. Then maybe, just maybe, we’ll rid Puerto Rico of the American flag’s stagnating shadow over our island and reduce it to a simple funerary shroud wrapped around the corpse of American colonialism, breaking away from that dying empire once and for all. 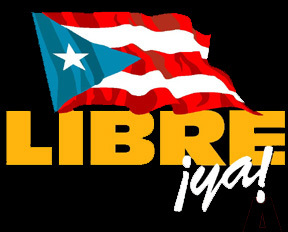 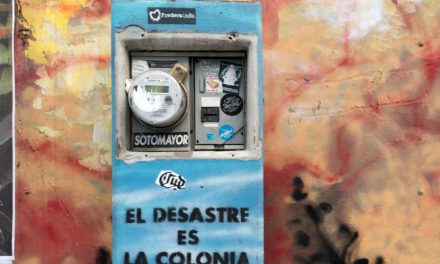