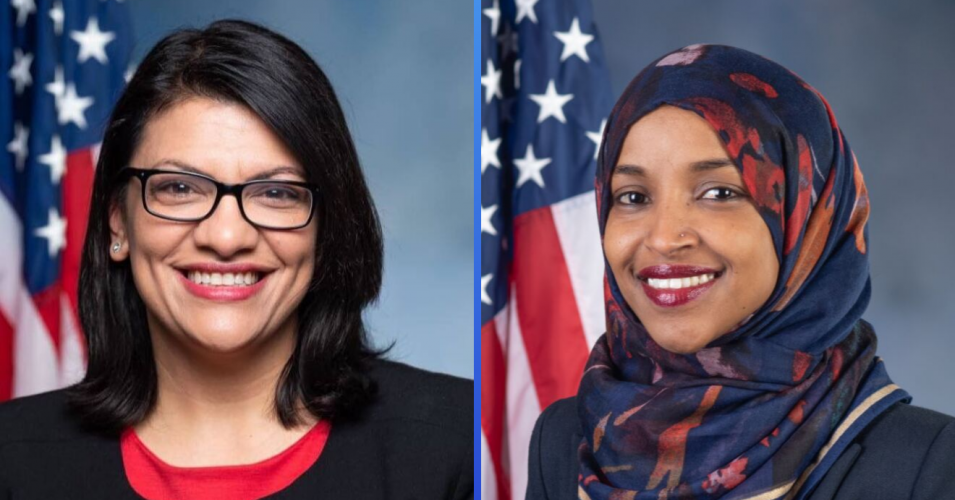 We are in the middle of a political upheaval on Israel/Palestine in the United States, and Americans who are concerned with Palestinian human rights live for these moments. They are the moments of potential change: When more tarnish is added to Israel’s image, and Americans get a clearer picture of what the Jewish state actually means for non-Jews under its sovereignty.

Most of these moments have involved a lot of bloodshed. Palestine had to have a lot of martyrs for anyone over here to even start paying attention. 2200 Palestinians died five years ago — over 500 of them children. Hundreds of brave Gazan protesters have died over the last year (with four NY Times columnists approving their killings).

This latest moment has been absolutely nonviolent. Two congresswomen tried to get into Palestine to meet with human rights groups and Palestinian leaders and see the occupation for themselves. They were barred by Israel because they support the Boycott, Divestment and Sanctions campaign, or BDS.

Israel’s banning was an obvious blunder. No one in the Israeli government imagined it would lead the news. It has led the American news. The decision has been condemned by everyone from the New York Times to AIPAC to Nancy Pelosi. It has angered a lot of Americans. A leading liberal Zionist called Israel’s move a “declaration of war” against American progressives, who have a right to see the occupation.

The story has been a wakeup call in the U.S. to how far right/intolerant Israeli society is. Despite Israel’s apologists’ efforts to blame Donald Trump for the move (Bari Weiss, MSNBC, the New York Times), a lot of Americans are blaming the country that won’t let our congresspeople in even though we give it more foreign aid than any other country, $3.8 billion a year.

The obvious response to this arrogance is — endorsing one of the actions of BDS — strip that foreign aid. The New York Times comments on the Tlaib/Omar coverage are stuffed with readers saying that if they won’t let our elected representatives in, shut off the spigot. For the first time, Democratic congresspeople are saying just that: cut the aid. Democratic presidential candidate Bernie Sanders doubled down on that stance on the campaign trail in the wake of the banning, knowing that Democrats want to hear as much: If Israel doesn’t stop its colonization of the West Bank the United States should stop giving Israel money.

This is a high watermark of opposition to Israel inside U.S. politics in more than 50 years, and it was brought off by two midwestern women of color: Rashida Tlaib and Ilhan Omar trying to visit the occupation even as they support BDS. The two are about as violent as Rosa Parks.

A lot of American politicians say they are for two states for two peoples, but they have done nothing to stop Israel’s expansion and colonization of Palestinian lands since its creation. Thirty years ago the Palestinians catalyzed the peace process with a historic compromise, indicating that they would accept sovereignty on 22 percent of original Palestine, but what has come of that? Nothing. No Palestinian state. Just more Jewish “settlements,” which are in truth “colonies,” with army protection in occupied territories. The Jewish state craves more land for Jewish settlers.

Many liberal Zionists and progressive Democrats have opposed the occupation, with nothing to show for their efforts. Months after he told Cairo the settlements must end, Barack Obama quailed and gave Israel more money. J Street opposed settlements but it went wobbly in 2010 or so when it realized it didn’t have the Jewish community at its back. Peter Beinart valiantly opposed the occupation in his book, The Crisis of Zionism, and in many public appearances.

But when Israel stopped Peter Beinart for a few hours at the airport last summer he was news, but it wasn’t an eyedropper of the attention Tlaib and Omar got being denied entry.

Because they are elected representatives. And: Because they support Boycott, Divestment and Sanctions.

BDS drives Israel crazy because it is the biggest threat that exists to its expansionist policies. It is that threat because of a global grassroots campaign that has convinced many European public figures and now some American ones that the only way to curb Israel’s treatment of Palestinians is a boycott call that draws on the strategies of the civil rights movement in the Jim Crow South and the anti-apartheid struggle in South Africa.

Israel is well aware of the precedents. It does not want to go the way of the Jim Crow South and apartheid South Africa. The Jewish state depends on Jewish supremacy.

Israel is so unhinged by the BDS campaign that it has launched a pretty successful anti-BDS campaign. That campaign has involved painting the BDS campaign as anti-Semitic — because it would delegitimize the “Jewish state” — and getting most American states to sign off on legislation to that effect, and a lot of governors too. It has involved getting major liberal Jewish groups including J Street to back anti-BDS legislation in Congress that passed last month by a whopping, 398-17, all but calling BDS anti-semitic.

Tlaib and Omar and a bunch of other progressives voted against that resolution. And this week Tlaib and Omar suffered for their support for BDS.

Israel struck an own-goal of stupendous magnitude by banning the Congresswomen. And there’s been an earthquake in U.S. politics as a result, with many Americans coming round to embrace one of the BDS goals, sanctions.

There is one obvious conclusion from this episode. BDS works. Whatever its economic successes or failures with company X or performer Y, BDS has thoroughly gotten under Israel’s skin and left the Goliath maddened. Israel has hit back against BDS with such intemperance that Americans are googling BDS as never before, BDS is being discussed on the airwaves, and the 56 percent majority of Democrats who believe in punishing Israel in aid for its unending gobbling of Palestinian land is gaining numbers as we speak.

BDS brought this about. This week’s news shows there is only one way forward if you believe that Palestinians are human beings deserving of equal rights.

If Kosovo, Why Not Palestine?