Victor Perlo (1912 – 1999), the well known U.S. economist, was a prolific writer. Besides his 13 published books, translated into a dozen languages, it is estimated that he wrote some 3,000 newspaper and magazine articles. Only about a third of these have been readily accessible to those wanting to publish a selection of his shorter pieces. "People vs. Profits, Volume I: The Home Front," a collection of Perlo's articles dealing with the domestic affairs of the United States, was published in 2003. Now comes Volume II, The United States and the World, with a focus on the U.S. government's foreign policy, the role of U.S. multinational corporations and an array of economic and political developments across the globe. It contains some 200 articles spanning more than 400 pages.

For over 39 years, Perlo, in his weekly columns for the People's Weekly World and its predecessor publications, analyzed the activities of eight U.S. presidents: Kennedy, Johnson, Nixon, Ford, Carter, Reagan, Bush I and Clinton. Four Democrats and four Republicans — a balanced sharing of bipartisan responsibility for the damages suffered by the peoples. What we extract from Perlo's works, always based on unimpeachable public sources, is the inflexible obsession of the U.S. government to dominate the entire world, based on its military, economic, financial and technological supremacy.

The author reminds us that the United States has always justified its expansionism as a struggle for noble causes against treacherous enemies: from the Monroe Doctrine in the 19th century against European intervention in Latin America to the "containment" of "the Soviet menace" and Communism under the Truman Doctrine to various ruses today. The Eisenhower Doctrine established Israel as the U.S. surrogate in the Middle East, and the Nixon Doctrine utilized Israel and South Africaagainst "African socialism." The Reagan Doctrine launched forays against "the Castroist governments" in Central America and theCaribbean. The Bush I Doctrine affirmed that the U.S. would maintain its military supremacy over any nation or group of nations for the indefinite future.

U.S. military interventionism is the subject of numerous commentaries by the author. Perlo noted its continuous use under different administrations and showed its direct connection to the military industrial complex. Many articles are devoted to the evolution of the Vietnam War — its cost to the working people through rising taxes, its impact on fiscal deficits, the increase in the public debt, inflation, unemployment, and the weakening of the dollar. From the onset of the U.S. intervention in Vietnam, Perlo's articles reveal his firm conviction that the U.S. would be defeated militarily and politically. At the end of the Cold War, the world awaited the promised era of disarmament and the onset of world peace. But, as we know, things did not turn out that way. Perlo shows how Bill Clinton began anew to raise military spending, launched his unsuccessful military adventure in Somalia, and supported Yeltsin's bloody blow against the Russian Parliament to facilitate the penetration of U.S. capital in that country.

Then Clinton provoked the first "humanitarian war," whose political objective was the disintegration of independent Yugoslaviathrough armed interventions in Croatia, Bosnia and Kosovo, and the bombing of civilian targets in Serbia, in order to install small satellite governments. According to the Clinton Doctrine, the United States, in effect abrogating its commitment to the United Nations, assumed the right, together with NATO, to attack any country on any continent where human rights are "violated." This is what Bush II is doing with his Afghanistan and Iraq invasions, with or without NATO, and with a new pretext: terrorism.

According to Perlo's research, already in 1974, during the first petroleum crisis, Nixon's secretary of state, Henry Kissinger, threatened to invade the Arab nations. Perlo commented that the basis for the crisis was the fact that the U.S. oil monopolies were being ousted from the region. The "Seven Sisters," who for decades dominated the world oil market, were faced with OPEC, a powerful rival organized by the Arab states and other developing nations. At that time, after Iraq's nationalization of its oil resources, Perlo, during a visit to that country, concluded that Iraq would become a critical focal point in regional and world politics.

Drawing upon his excellent command of Marxist concepts, Perlo defined U.S. imperialism as a financial oligarchy that controls the government and uses global monopolies as an economic form of domination through foreign investments, rather than through the export of goods. He pointed out how it heavily relies on militarism as a major source of business. Perlo noted in 1977 that the profits of U.S. multinational corporations had increased 20 times since the end of World War II. He predicted that U.S.investments in Asia would affect employment of U.S. workers. In his last articles at the end of the '90s, Perlo analyzed globalization — the exaggerated growth of finance capital — and the havoc produced (and continue to produce) in Asia and the rest of the world.

In numerous columns, Perlo denounced U.S. interventionism in Latin America. He wrote about the Puerto Rican struggle for independence. He explained why the U.S. Marines invaded Santo Domingo. He recalled Reagan’s aggressions against Nicaraguaand Grenada, and the Bush I assault against Panama. Perlo endorsed the nationalization of petroleum in Peru and the government of Velasco Alvarado. He repudiated Washington's backing the military assault of Banzer in Bolivia. He pointed out the social advances in Cuba throughout the 1966–76 decade. Various articles analyzed the foreign debt crisis during the '80s and its consequences to Latin America in terms of unemployment, lower salaries and bankruptcies. He described how speculative, runaway capital was an important factor in Mexico's bankruptcy, and how the Brady Plan forced the denationalization of mines and basic industries.

Victor Perlo visited Chile on two occasions. He viewed close-up the rise of the Popular Unity movement, the military coup and the dictatorship. He saw President Salvador Allende as the driving force of progressive nationalism on the continent and Popular Unity as a trailblazer on the path to socialism. Perlo denounced the economic war against Chile by Kennecott and other U.S.corporations in retaliation for Allende's nationalization of Chile's copper. He described the solidarity of the socialist countries with the Chilean government and noted Allende's gratitude toward all those who extended a helping hand. Perlo also denounced Carter's contradictory behavior toward the dictatorial regime of Gen. Augusto Pinochet and Wall Street's economic assistance to the dictatorship. In his last article devoted to Chile (1977), Perlo supported Chile's entrance into Mercosur, the Latin Americaregional trade pact, with the aim of breaking away from dependence on Washington, and Chile's rejection of the Free Trade Agreement with the United States.

Perlo was a firm believer in socialism. He defended the Soviet Union without reservation, and frequently described its material and social advances, even using the CIA's own statistics. In an interesting postscript written by his son Stanley, Victor's error (shared by many millions worldwide) — the belief that socialism in the USSR and Eastern Europe was irreversible — is admitted. Actually, it was one of Perlo's few errors, and one from which we must draw profound lessons today, given our understanding of what imperialism is doing to humanity. That understanding has been enriched by the writings of Victor Perlo.

Jose Cademartori, a longtime member of the Communist Party of Chile, was minister of economics in Chile during the government of President Salvador Allende (1970—1973). Following the military coup that overthrew the Allende government, Cademartori was imprisoned by the right—wing military dictatorship, along with other popular leaders, in the concentration camp on Dawson Island. He remains in the leadership of the Communist Party of Chile today. 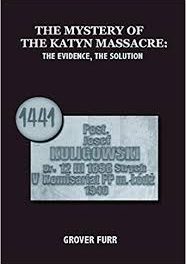 Book Review: The Mystery of the Katyn Massacre by Grover Furr