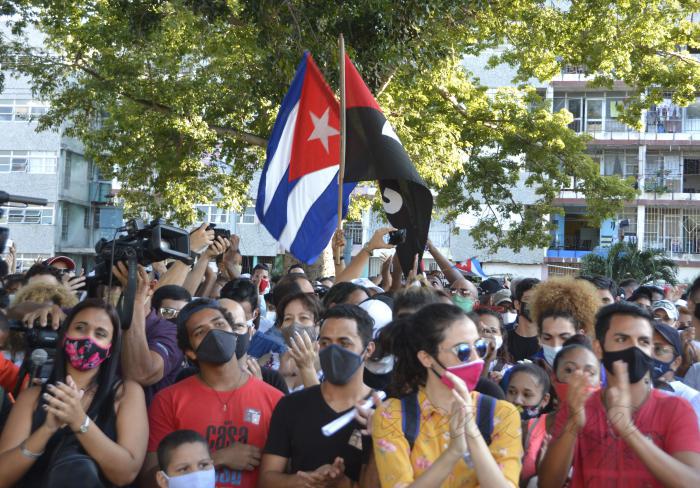 The National Network on Cuba  (NNOC) strongly condemns and refutes the recent U.S. State Department declaration regarding the detention of a member of the Cuban “San Isidro Movement.” The United States falsely claims the individual was targeted for exercising his freedom of expression. Even more cynically it states that the U.S. stands in solidarity with the Cuban people, and calls for respect of human rights.

The United States falsely claims the individual was targeted for exercising his freedom of expression. Even more cynically it states that the U.S. stands in solidarity with the Cuban people, and calls for respect of human rights.

This is the same U.S. State Department that has been focused on financing, encouraging, and provoking “dissidence” in Cuba; interfering with the internal affairs of Cuba; using the resources of the U.S. Embassy to materially benefit those individuals and groups who are being used to foment social unrest. This disgraceful focus on human rights emanates from a country that spends millions to deny Cubans of their human rights to develop in accordance with their own principles based on human needs, education, health, etc.

This outcry was in response to an individual in Cuba having been arrested/detained in accordance with Cuban laws.  Compare that with the U.S. police action that resulted in the death of George Floyd and countless other U.S. victims of judicial and extrajudicial actions. Compare the per capita numbers of incarcerated individuals in the United States not just with Cuba but with any other country. The United States has no authority whatsoever to point fingers and claim the moral high ground.

We are certain that the world sees this cynical action of the U.S. for what it really is: A continuation of the policy of subverting the sovereignty of the Republic of Cuba through a financial blockade aimed at creating economic hardship and exacerbating suffering.

We are also certain that the world sees the hypocrisy of the United States whose own long and well documented history is one of violently attacking its residents as they engage in peaceful protests against war, racism, segregation, poverty, etc.

The rest of the world is partnering with Cuba and engaging in meaningful scientific and health research and accepting the generous expertise of Cuba’s medical community. There have been Cuban medical workers serving in 39 countries aiding the fight against COVID-19.

Additionally thousands of individuals and groups are supporting the campaign to award the 2021 Nobel Peace Prize to the Henry Reeve international medical brigade.
While the rest of the world takes advantage of the opportunities for cultural, scientific, sport, and academic exchanges with Cuba, the United States denies its people the human right to travel to and exchange with our Cuban brothers and sisters.

The United States continues to pursue a 60 year failed obsession with regime change. This has been U.S. policy since the 1959 Triumph of the Revolution regardless of the political party in the White House.

We call on all NNOC members to continue to demand an end to the economic, commercial, and financial blockade of Cuba and to respect the sovereign rights of the Cuban government and its people.