The Intersection of Race and Class 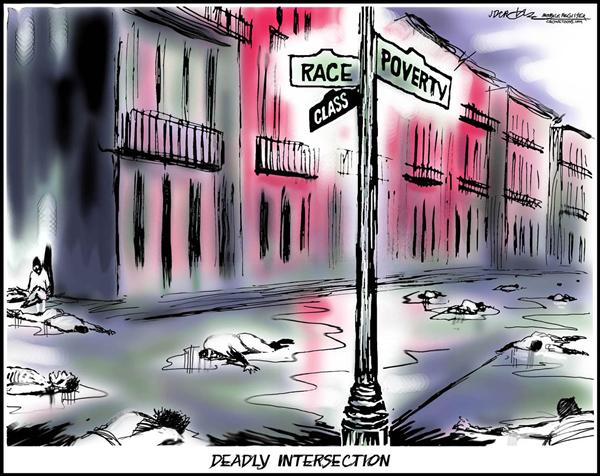 Convinced, with the election of a Black president, that we had finally arrived at a post-racial society, US opinion-makers and political leaders retired the charge of racism from public discourse.

With the doors to most private clubs, plush neighborhoods, and fancy accommodations now open to African-American elites, with Black celebrities, sports heroes and entertainers “crossed over” to be widely accepted by whites, the racial barriers — we were told — were a thing of the past.

Barack Obama himself did much during his presidency to highlight this image, assiduously avoiding any allusion to patterns of racial injustice or intolerance.

And when previously ignored racist police violence was brought to the fore through the explicit exposure using the ubiquitous mobile phone or video camera, the media and political leaders dismissed it as aberrational or legally ambiguous.

President Obama sought to minimise that awareness in April when he lectured a group in London on the value of patience and incrementalism: “You can’t just keep on yelling” — a remark aimed at the leading US voice against police violence, Black Lives Matter.

However, racism is back. Actually, racism never left, but it has caught the attention of the previously blind and deaf. The catalyst for the new awareness is Donald Trump. Trump’s systematic racism in constructing his real estate empire is well documented, though it has not troubled the media or Democratic Party leaders until now.

His hysterical and heavily publicised attempt at lynching five innocent black youth — the Central Park Five — did not keep him from reality television stardom or elite celebrity. The Clintons socialised with him, graciously attending one of his weddings.

Like the Clintons and most elites, his racism is entangled with ambition. When it is economically or politically expedient — imposing racist real estate covenants (Trump) or dismantling welfare (Clinton) — publicly espoused principles are readily compromised.

Hillary Clinton would like us to forget her labelling Black youth in gangs as “superpredators,” a racist term conjuring imagery of wild animals.

She opportunistically dropped her liberal facade to promote President Bill Clinton’s draconian Crime Bill that effectively criminalised hundreds of thousands of African-Americans and terrorised even more.

So it is easy to see the media campaign against Trump’s bigotry as hypocritical. But it is worse than special pleading for Clinton — it is a cynical play on racism as vulgarity, a superficial reaction to locker room and private club banter. The contemptuous crudity of Trump’s appalling insensitivity to African-Americans, women and immigrants is rightly rejected by the mainstream media, but little is made of the crippling effects of institutional or structural racism, the social and economic burdens that oppress African-Americans as a group.

US elites, politicians and their servile media attend to racial manners while systemic inequality grinds away at the lives and opportunities of US Blacks.

The bloody first step toward the emancipation of African-Americans came with their escape from the bondage of slavery.
After over 200 years of forced labour and the indignity of existing as chattel, the hope of full citizenship that came with the overthrow of slavery was quickly stifled.

Segregation, civil rights denied and the broken promise of even minimal economic independence (“40 acres and a mule”) left Blacks nominally “free,” but bound to a universal inferiority.

The long and persistent civil rights struggle bore fruit in the 1960s with the gaining of a broad suite of rights barring legal segregation, delegitimising discrimination and removing many barriers to voting.

African-Americans took another important step toward full emancipation, but one that — again — fell short of gaining full equality.

For liberals, the road to racial equality ran through public education. Placing Black students among white students and vice versa within urban school districts was thought to break down existing barriers and provide equal educational opportunities.
Liberal elites who sent their children to private or parochial schools were fine with this solution.

But when educational reformers took the logical step of integrating poorer urban districts with well-funded middle and upper-middle strata suburban communities, the campaign for equality folded.

After the 1974 US Supreme Court decision in Milliken versus Bradley (argued over integrating the 85 per cent Black Detroit school district into white suburban school districts), school integration has been in full retreat.

Today, excepting the former segregationist South, US schools are more racially divided than they were before the landmark Brown v Board of Education decision and with no remedy on the horizon.

The other route favoured to achieve full emancipation was affirmative action — effective policy goals for including African-Americans in public and private life.

After some initial successes, the policies of affirmative action have been eroded to the point where they are virtually nonexistent today, outside of higher education.

The Democratic Party, the party benefitting the most from the African-American vote in the modern era, has virtually abandoned the quest for full equality and the elimination of structural and institutional racism.

Twenty years after the passing of historic civil and voting rights legislation, the Democratic Party policy commission of the Democratic National Committee presented a policy proposal that barely mentioned African-Americans.

New Choices in a Changing America (1986), an 83-page document, recognises no obstacles to black citizens, offers no solutions specific to African-American problems, and affirms the “benign neglect” that has been the Democratic Party policy ever since.
The struggle for full emancipation of African-Americans in the US remains unfinished business.

African-Americans significantly trail their white counterparts in every major indicator of social and economic wellbeing.
Until blacks are guaranteed the means as well as the formal opportunities to participate in all of the institutions of US society, they will remain shackled to the legacy of slavery.

When a people lacks the economic means to advance, when they remain held back by physical isolation, when they are weighted down by substandard homes and public services, then formal opportunities are clearly not enough.

Put simply, the liberal ideal of equality of opportunity is not alone sufficient to continue on the path toward full equality.
It is increasingly clear that 21st-century racism intersects overwhelmingly with class. While a substantial stratum of “successful” African-Americans enjoy the fruits of the civil rights era — a group that the writers at Black Agenda Report derisively call the “Black Misleadership Class” — the masses of US Blacks still struggle with poverty, low incomes, shabby services and neglect.

Assassinated leaders like Malcolm X and Martin Luther King were recognising the limitations of formal equality and stressing the necessity of economic equality before we lost them — they were beginning to challenge whether capitalism could ever deliver equality.

There are encouraging signs that groups in the US like the Black Radical Organising Collective and the Black is Back Coalition are, in that spirit, seeking answers beyond electing a Black president and moralising about an election outcome.

The Demise of an Old Friend, the PWW