From that point on, the options available to the "West" began to shrink, leading inexorably to the current historical juncture, in which U.S.-led imperialism relies almost entirely on its overwhelming military superiority to maintain itself.

"By 2020," according to United Nations Development Program, "the combined economic output of three leading developing countries alone Â Brazil, China and India Â will surpass the aggregate production of Canada, France, Germany, Italy, the U.K. and the United States."

The Organization of Economic Cooperation and Development, comprised of the world’s richest countries, predicts that China will surpass the United States as the world’s biggest economy by the end of 2016. By some measures, China actually overtook the U.S. back in 2010.

Brazil’s economic development bank is bigger than the World Bank. Last year, BRICS nations sent $75 billion to the IMF to help bail out European financial institutions Â so, these countries can well afford to capitalize a BRICS development bank, as they agreed to do, in principle, this week in Durban. It is a question of political will. U.S. and western European economic decline is an irreversible fact.

The essential question facing the Global South, with the BRICS in the lead, is to what extent, and how long, will they shore up the crumbling old Euro-American edifices Â in which they also have huge investments and which are backed by a war machine that strives for full spectrum dominance of the planet. We are living at a crossroads of history.

The productive center of the world is shifting back to where it was before western Europe began its 500-year war against the rest of humankind: to China and India, the economic powerhouses of the pre-colonial planet. Europe used force to organize the world to its own, absolute advantage, depopulating a whole hemisphere and much of Africa in the process.

Prior to the Industrial Revolution, which was fueled by colonization and slavery, most of the world’s people enjoyed similar living standards. The great global imbalance in the human condition, largely along lines of color, is the product of half a millennium of predation. The gory enterprise could not, however, forever contain the human impulse toward self-determination, or escape the laws of political economy.

Unable to export the contradictions of dwindling rates of profit in a decolonizing world, western financial capitalists exported their industrial capacity, instead. Power must shift, as well. This is the central quandary of the BRICS, and of U.S. imperialism.

The United States, firmly in the grip of hyperactive finance capital, has acquiesced to its diminishing role in world trade. It doesn’t seriously attempt to directly compete with the core BRICS countries in Africa and Latin America. Washington is betting its global hegemony on military coercion, pure and simple. The U.S. is now the "indispensable nation" only in the sense that it refuses to tolerate a world in which it is not treated as such.

Under Presidents Clinton, Bush and, especially, Obama, the U.S. has waged an escalating war against international legal order, largely under the pernicious doctrine of "humanitarian" military intervention.

National sovereignty is treated as a dead letter, and trade sanctions are quickly followed by armed, barely covert assaults on unoffending governments. The U.S. publicly announces possession of new systems of warfare that can annihilate targets with a conventional weapon anywhere on the globe in half an hour. The message is clear, repetitive and meant to be terrifying: No nation, or combination of nations, will be allowed to challenge U.S. dominance in the world, as defined by Washington.

The superpower in decline is not only willing to throw the world into chaos to preserve its artificial position at the top, it is actively doing so in Syria, following up its decapitation of Libya. It swarms over Africa, to secure political obedience despite its economic eclipse on the continent.

Objectively, the United States has positioned itself as the great and implacable impediment to global development. Therefore, when the BRICS say that their summit is motivated by "a shared desire for peace, security, development, cooperation, respect for international law and sovereignty," as was announced at the 5th BRICS Academic Forum, earlier this month, they are placing themselves in opposition to the U.S. juggernaut.

It is not a place that these nation’s governments want to be. But, if they are to continue on the road to self-determination and achievement of their own national goals Â including their capitalistic aspirations Â they have no choice but to resist Washington’s policies of coercion and the threat of strangulation. It is not up to the BRICS to save the world.

But, in order to save their own parts of the planet, they will be forced to confront U.S. imperialism. The monster must be removed from humanity’s path. Only then can we truly begin to clear out the rubble of the 500-year war, and build a new global society. 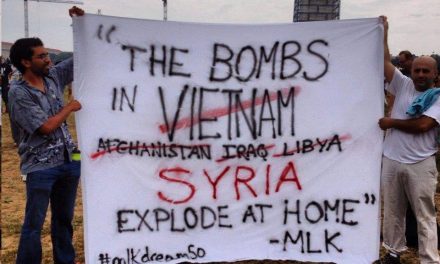