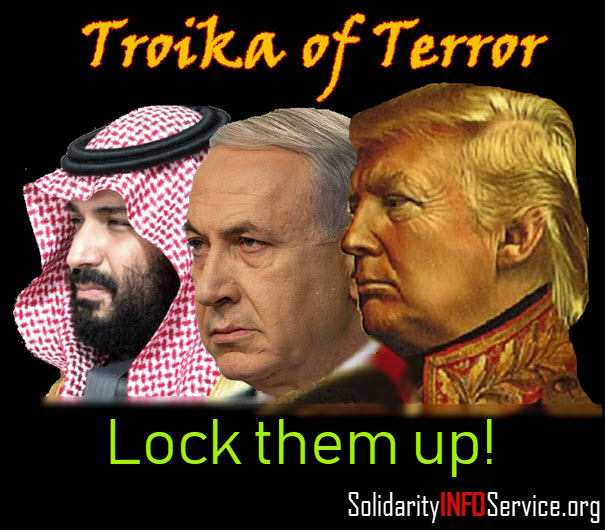 So, there it goes. Trump did what he promised. He took the United States out of the “Iran deal.” It was possible that Trump was merely bluffing. He has done this before. He has suggested a policy and then done the very opposite. But on Iran, all the signs pointed toward this madness. For it is, indeed, madness.

Just after he did so, the Israelis bombed an Iranian facility inside Syria. This is not Israel’s first attack on Iranian assets inside Syria. Nonetheless, it was very provocative that Israel attacked just two hours after Trump’s dramatic withdrawal of the United States from the 2015 Iran deal.

What do Trump and his allies hope will happen with this withdrawal? Already, as uncertainty gripped Iran and its creditors over the past several months, the Gross Domestic Product fell from 12.5 percent (from 2015 to the start of this year) to 4 percent. During the period of full-scale sanctions before the 2015 deal, Iran’s economy shrank by around 7 percent. Economic suffering as a result of the sanctions will intensify.

Pressure will mount on Iran. At some point, the Iranians will be obliged to retaliate. When they do, the United States, the Israelis and the Gulf Arab satraps will bomb Iran itself. That, my friends, will widen the doors to hell. These doors are already ajar in Central and West Asia. They do not need to be opened wider.

What is gained by this decision? It brings glee to the most irrational elements in West Asia (namely the ruling regimes of Israel and Saudi Arabia). They have long wanted a war to punish Iran for daring to have a forward policy in West Asia. They want Iran to return to its borders. But Iran will not do so.

Iran has every right to have diplomatic and military ties with friendly governments. It is an odd situation to be critical of Iran for being welcomed into the ruling circles of Iraq, for instance, when the United States—whose territory does not extend to the region—has intimate connections to each of the Gulf Arab satrapies and which has military bases along the rim of the Arabian Peninsula. These bases—such as in Bahrain and Qatar—directly threaten Iran.

Iran had been hemmed into its borders from 1979 to 2001. During this period, internal weakness in Iran was heightened by the Iraqi assault on Iran (Iraq was backed by the Gulf Arabs and the West to overthrow the Iranian regime) as well as by the rise of the Taliban in Afghanistan. The U.S. attack on Afghanistan (2001) and on Iraq (2003) removed Iran’s two historical enemies (the Taliban and Saddam Hussein’s Ba’ath Party). America fought these two wars, but Iran won them.

Since 2003, the U.S., Israel and the Gulf Arabs have tried to force Iran to withdraw from the region. Several attempts by the U.S., Israel and the Gulf Arabs failed. It was not possible to overthrow the Syrian government—a close ally of Iran—or to bring to power in Baghdad an anti-Iranian government. Israel failed to defeat Hezbollah in its bloody assault on Lebanon in 2006. Out of nowhere, the West began to beat the drum of the nuclear threat. The threat of Iran’s nuclear program had less to do with nuclear weapons—of which Iran has none—and more to do with Iran’s regional expansion.

It is going to be impossible for the West and its allies to push Iran back to its borders.

Iraq. On May 12, Iraq will hold a parliamentary election. Both the frontrunner lists—Nasr and Fatah—are pro-Iranian. It is likely that the next prime minister of Iraq will be Hadi al-Ameri, whose Hashd force was instrumental in defeating ISIS north of Baghdad. A pro-Iranian government will not only win the next election in Baghdad, but it is clear that any configuration in Iraq will likely be pro-Iranian. A war against Iran will bring Iraq to its defense. U.S. interests in Iraq will be definitely attacked.

Lebanon. After several years without a legal parliament, Lebanon recently held its elections. Hezbollah held its own and—with its allies—has a very strong political position in the country. Hezbollah is not a marginal force, but a central political actor in Lebanese society; Hezbollah defines—as the Resistance—the national project of Lebanon. It has also gained military training as a result of its intervention in Syria. Hezbollah is prepared for another war with Israel. If Israel attacks Iran directly, Hezbollah will definitely open a front against Israel.

Syria. Syria is now certainly very close to Iran, with the Syrian government of Bashar al-Assad utterly beholden as a result of Tehran’s sacrifices to protect that government. If Israel attacks Iran, it is likely that the various pro-Iranian paramilitary groups inside Syria will move toward the Golan Heights—now held illegally by Israel.

The political connections that tie Tehran to Beirut have been strengthened by the territorial linkage with the opening of roads for the use by the Iranians. Several roadways are now open from Iran through Iraq to Damascus (Syria) and then onwards to Beirut (Lebanon). It is along these roadways that Iran can now easily resupply Hezbollah. No surprise then that Israel has repeatedly attacked convoys along these roads—whether they bring military supplies or canned milk from Iran. American bases have been routed in the area around these roadways. Iran, meanwhile, has built warehousing around these roadways. It is these warehouses that have been attacked over the course of the past few weeks, including Tuesday night.

The United States is going to return to aggressive sanctions against Iran. Trump’s team has already put Boeing and Airbus on notice. Iran is the third largest oil producer in OPEC. It provides oil to a great many oil firms and supplies countries around the world, notably in Asia. These companies and these governments now worry about the return to sanctions. An economic downturn can be expected.

No wonder the governments of France, Germany and the United Kingdom—key partners in the Iran deal—have said that they would continue to honor the deal. Europe has lost two important energy suppliers—Russia and Libya. It cannot afford to alienate Iranian oil supplies. Nor can the countries of China, India, Japan, South Korea and Turkey—all of whom have said that they support the Iran deal. South Korea has already said that it would ask the U.S. for an exemption from U.S. sanctions on Iranian oil exports. They will push to continue to push against Trump’s sanctions.

Will the United States and its allies attack Iran? It is not unlikely. The speaker of Iran’s parliament—Ali Larijani—said, “Trump does not have the mental capacity to deal with issues.” This is a view that is shared across the world.

All eyes are on Moscow. Israel’s leader Benjamin Netanyahu has flown today to Moscow on a lightning trip. He says he is in Moscow to talk about Syria, but in fact he will be asked about U.S. and Israeli intentions against Iran. Russia relies on Iran for its project in Syria. Moscow cannot afford a U.S.-Israeli war on Iran. Would the Russians send in missile defense systems as a message to the United States? Would Russian military aircraft land in Tehran as they did in Damascus in September 2015? Would the Russian shield around Iran muffle the American drums of war?

Vijay Prashad is a writing fellow at the Independent Media Institute. He is the chief editor of LeftWord Books and the director of Tricontinental: Institute for Social Research. He is also the author of Red Star Over the Third World (LeftWord, 2017) and The Death of the Nation and the Future of the Arab Revolution (University of California Press, 2016), among other books.