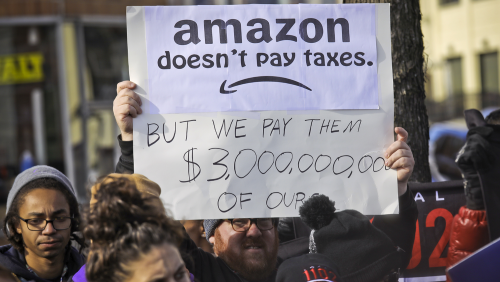 By Matthew Cunningham-Cook and Julia Rock

The retailer’s anti-labor activities could be violating the terms of multi-million subsidy deals it has scored in New York.

In the wake of a historic labor victory at one of its Staten Island warehouses earlier this month, Amazon is reportedly ramping up its union-busting operations across New York and beyond. Those attempts to crush a union are effectively subsidized by government money in states whose politicians portray themselves as pro-labor.

As Amazon now faces investigations over allegations that it violated labor laws, the company continues to benefit from lucrative subsidies and tax breaks, even though most of these funds are conditioned on complying with regulations, including labor law. In all, the company has received more than $4.1 billion in subsidies from state and local governments nationwide, according to data collected by subsidy-tracking organization Good Jobs First.

In New York, the relationship between public money and Amazon’s union busting is front and center. The company was just found to have illegally fired a worker for speaking out at that Staten Island warehouse two years ago. At the same time, the state and local governments have directed roughly $387 million to the company in direct public subsidies and guarantees — some of which have gone towards construction of the very facilities where workers are now fighting to unionize, according to data collected by Good Jobs First.

Nearly all of these subsidy arrangements stipulate that Amazon must comply with the law — and now an attorney for the Amazon Labor Union (ALU)  has filed a complaint asking New York’s Democratic Attorney General to investigate whether Amazon has violated labor laws and thus nullified its eligibility for subsidies. At the same time, a New York lawmaker is planning to offer legislation to stop the subsidy deals and force Amazon to return all of the public money it has received.

“I plan to introduce new legislation to not just end but also claw back all tax breaks and credits for any company under the Excelsior jobs program engaged in violation of worker and environmental protection laws,” said New York Assemblyman Ron Kim (D). “If we do not stop subsidizing Amazon’s warehouses, New York state becomes complicit in subsidizing union-busting practices with taxpayer money.”

The spectacle of public money subsidizing union busting is being replicated on a national level. President Joe Biden pledged during the 2020 campaign he would  “ensure federal contracts only go to employers who sign neutrality agreements committing not to run anti-union campaigns” — but his administration has made no move to fulfill that pledge, and also gave Amazon a $10 billion contract last year, despite the company running an aggressive union busting campaign at its warehouse in Bessemer, Alabama.

Amazon workers tell The Lever that the company’s anti-union activities are intensifying — especially as the upstart ALU heads into its second election at another Staten Island warehouse on April 25.

“Generally speaking, in terms of breaking labor law, they’re doing it all the time,” said Justine Medina, an ALU organizer at the first unionized Staten Island warehouse. “They’re calling the cops on labor organizers, including their own workers… Amazon is removing our literature, taking it down, throwing it away. They’re interfering with our co-workers’ ability to talk about the union drive. Every way you can think of the typical union busting stuff — they’ve been doing it all.”

JFK8, the mega-warehouse in Staten Island where the ALU won a union victory earlier this month, came into being in 2017 as one of the first and largest subsidized Amazon projects in the state.

The company received up to $18 million in subsidy guarantees for the warehouse from the Empire State Development Corporation, a public-benefit corporation that focuses on economic development in the state.

The public money came with strict requirements: The authorizing statute for the program stipulates, “A business entity must be in compliance with all worker protection and environmental laws and regulations.”

The Excelsior program has repeatedly listed Amazon as one of the businesses in its program, including in its most recently published quarterly report.

When asked whether Amazon’s alleged labor violations could affect the company’s eligibility for its Excelsior program subsidies, a spokesperson for the Empire State Development Corporation said the organization “takes labor and workplace violations seriously and will review any determinations made by the National Labor Relations Board.”

But the spokesperson noted, “To date, Amazon’s Staten Island distribution center has not collected New York state tax credits or other state incentives,” adding that Amazon had received roughly $565,000 in other tax credits through the Excelsior program, mainly for a subsidy for an office in Manhattan.

The corporation did not respond to further questions about how officials would review Amazon’s ongoing eligibility for the subsidy program.

Along with participating in the Excelsior program, Amazon is also actively benefiting from public subsidy deals with local development authorities — arrangements that also mandate compliance with federal law.

In 2021, Amazon came to a job-creation agreement with the Nassau County Industrial Development Authority on Long Island that allowed it to make smaller local tax payments in lieu of its full tax bill. That agreement stipulated that “The Company agrees that it will, throughout the term of this Project Agreement, promptly comply in all material respects with all… requirements of all federal, state, county, municipal and other applicable Laws.”

That same language exists in a 2020 agreement for a 90-percent tax cut worth $20.8 million that Amazon signed with Rochester-based Monroe County in order to build a warehouse in the city. That same year, a $2.3 million tax agreement Amazon entered into with Suffolk County on Long Island said, “Applicant confirms and acknowledges that the owner, occupant, or operator receiving financial assistance for the proposed project is in substantial compliance with applicable local, state and federal tax, worker protection and environmental laws, rules and regulations.”

In total, New York local governments have awarded Amazon more than $300 million in subsidies, according to Good Jobs First. The state has awarded Amazon Studios an additional $37 million in film tax credits in the past decade.

Amazon did not respond to a request for comment.

Just this week, an administrative law judge found that Amazon had violated federal labor law in its termination of Gerald Bryson, a warehouse worker who was fired early in the pandemic after protesting unsafe working conditions at JFK8.

According to Seth Goldstein, lawyer for the ALU, such behavior is par for the course for the retail giant.

“A disturbing legacy of Amazon is they think no law applies to them,” said Goldstein. “I’m up to [labor violation] charge number 50, and they continue to violate federal labor law.”

After learning about how Amazon’s activities could put it in violation of its public subsidy deals, Goldstein said the ALU filed a complaint on the matter with James’ office.

Under New York’s Executive Law, James has broad power to investigate “persistent fraud or illegality in the carrying on, conducting, or transaction of business.”

The attorney general isn’t the only state official who could examine Amazon’s eligibility for taxpayer subsidies. New York Democratic Gov. Kathy Hochul oversees the Empire State Development Corporation, for example, while the state comptroller has the ability to audit the organization. Now some observers are calling on these officials to look into whether Amazon’s anti-labor activities could have breached its subsidy contracts.

“Most New Yorkers who aren’t billionaires will want our government to go to bat for Amazon workers in this fight,” said Michael Kink, the Executive Director of the union-backed Strong Economy for All Coalition, in New York. “I expect that Governor Hochul, Attorney General Tish James, and State Comptroller Tom DiNapoli will dig in to make sure Amazon isn’t violating state or federal labor and tax laws and regulations at JFK8 or any of their other publicly-subsidized facilities, and that all Amazon workers as well as their bargaining representatives get the fairness, safety, and organizing protections to which they have a legal right.”

Efforts to hold Amazon accountable, including ALU’s complaint and Kim’s forthcoming legislation, will likely face considerable interference, thanks to the powerful, well-connected lobbyists working in Albany on Amazon’s behalf.

According to the most recent public disclosures, the MirRam Group, a strategic consulting firm co-owned by Hamilton playwright Lin-Manuel Miranda’s father Luis Miranda, received more than $100,000 last year from Amazon to lobby on its behalf, and an additional $32,500 from the company for its work this January and February. Luis Miranda is reported to be very close to James and donated more than $10,000 to her 2018 campaign for Attorney General.

According to Political MoneyLine, Amazon also donated $250,000 on March 31 to the Democratic Governors Association, which helps fund the Democratic gubernatorial campaigns across the country. Amazon previously donated $175,000 the firm donated to the organization last September, the same month the association endorsed Hochul, who is facing primary challenges from New York City Public Advocate Jumaane Williams on the left and from Rep. Tom Suozzi of Nassau County on the right.

Since 2019, Amazon has given $185,000 to the Democratic Legislative Campaign Committee, which supports Democratic efforts to control state legislatures. During that time, the committee has been chaired by New York state Senate Majority Leader Andrea Stewart-Cousins, who helps Hochul appoint members of the powerful board that oversees public subsidies in New York. Stewart-Cousins would also decide whether or not Kim’s legislation to stop Amazon;s subsidy deals would reach the floor.

Amazon has cultivated additional deep connections to the Democratic Party. Former Clinton-era Justice Department and Pentagon official Jamie Gorelick sits on the company’s board of directors. Jay Carney, who served as a press secretary to President Barack Obama and then-Vice President Biden, is the head of Amazon’s worldwide communications. Jessica Schumer, daughter of U.S. Senate Majority Leader Chuck Schumer (D-NY), is a registered lobbyist for Amazon in New York. 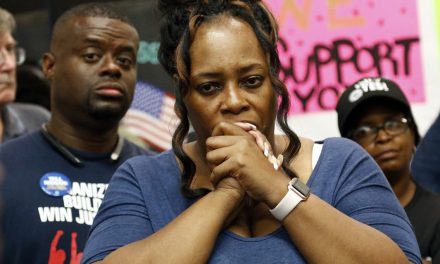