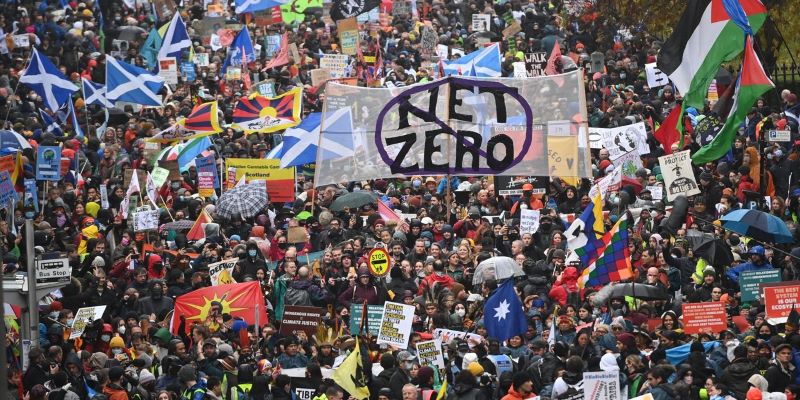 By Vijay Prashad and Zoe Alexandra

Two major gains took place at the 26th Conference of the Parties (COP) in Glasgow, Scotland, which concluded on November 13: the first was that there would be another COP in 2022 in Egypt, and the second was that the world leaders expressed their aspiration to keep global temperature below 1.5 degrees Celsius alive. These were, however, the only gains made at the end of COP26 to address the pressing issue of climate change.

After more than two weeks of intense discussions—and many evenings of corporate-funded cocktail parties—the most powerful countries in the world left the convention center pleased not to have altered the status quo.

The focus of the discussions and negotiations by world leaders during COP26 seemed to be on the change of a word in the Glasgow Climate Pact, the final document that will be adopted by nearly 200 nations. Initially, the countries had begun to agree to the “phase-out” of coal; the final version of the document, however, merely said that the countries would “phase down” coal.

During the last hours of the COP26 climate summit on November 13, Swiss Environment Minister Simonetta Sommaruga took the microphone and expressed her “profound disappointment” with the change. “The language we had agreed on coal and fossil fuel subsidies has been further watered down as a result of an untransparent process,” she said.
The rich have refused to do their fair share, more empty words on climate finance. You have turned your backs on the poorest who face crisis.

Sommaruga is correct. The process has been “untransparent.” Only a handful of world leaders—from the most powerful countries—had the opportunity to put pen to paper on this pact; the majority of world leaders only saw a draft of the Glasgow Climate Pact and were then provided the final document.

Civil society associations were barely allowed to enter the hall, let alone to have the opportunity to sit with the pact and give their input on it. As President of the European Commission Ursula von der Leyen put it bluntly, “never before has a responsibility so great been in the hands of so few.” Why this “responsibility” was, however, entrusted to the “hands of so few” goes unremarked in her speech.

Words and Meanings
During the COP26, thousands of documents appeared on the United Nations Framework Convention on Climate Change (UNFCCC) website, which included reports, statements and proposals relating to COP26. It would take an army of lawyers to scour through the text of these documents and make sense of them. Most of them are submissions made by a range of governments, corporations and corporate-funded platforms as well as civil society organizations.

It was clear from the first day of COP26 that the focus of achieving “net-zero” carbon emissions by 2050 was going to be on coal and not on all fossil fuels. Right through the negotiations, this was the fault line, with the Western countries—which are largely non-coal reliant—putting the emphasis on coal—which is used mainly in the Global South, with India and China in the lead. To make the COP26 about coal allowed fossil fuel use in general (including oil and natural gas) to receive a breather.

While pressure mounted to cut subsidies for fossil fuels, the Global North was able to gather consensus that only “inefficient” subsidies would be cut with no timetable provided for these cuts. Sommaruga, who spoke so forcefully against the phrase “phase down” when it came to coal, said nothing regarding the allowance for “efficient” subsidies to underwrite fossil fuel use. It is far easier to blame India and China for their reliance on coal than to agree to phase down all fossil fuels.

Climate Finance
On November 15, China’s Foreign Ministry spokesperson Zhao Lijian said that China “attaches high importance to energy transition.” But he specified that there are some issues that need to be looked at before that. First, no energy transition can take place without awareness that “not everyone has access to electricity and energy supply is not adequate.” Cutting coal tomorrow will condemn billions of people to a life without electricity (about 1 billion people still have no electricity connection, with most of them living in the Global South).

Second, Zhao said, “We encourage developed countries to take the lead in stopping using coal while providing ample funding, technological and capacity-building support for developing countries’ energy transition.” The developed countries had agreed to fund the Green Climate Fund to the tune of $100 billion per year by 2020, but the actual amounts disbursed have been far smaller. No agreement on finance was reached at the COP26. “We need concrete actions,” said Zhao, “more than slogans.”

Glasgow’s COP26 was filled with corporate executives. They swarmed the hotels and the restaurants, holding private meetings with government leaders and with Prince Charles. The International Chamber of Commerce told governments to “wake up,” while the U.S. Business Roundtable said that “the private sector cannot shoulder the burden alone.” The implication here is that the corporations are on the right side of the climate discussion, while the governments are being hesitant. But this is partly the work of the spin doctors.

Most corporations that have made “net-zero” pledges have done so in a nonbinding way and without a timetable. At the conclusion of the conference, it seemed that neither the powerful governments nor their corporations were willing to tie their hands to a real agreement to mitigate the climate crisis.

People’s Summit
Just some blocks down from the grand halls of the official summit, people’s movements, Indigenous organizations, trade unions, youth groups, migrant groups, environmentalist organizations, and many more met as part of the People’s Summit for Climate Justice from November 7 to November 10. Their message was simple: corporations and their pliant governments would not do the job, so people need to find a way to set the climate agenda “for system change.” The more than 200 events organized as part of the People’s Summit addressed a range of topics from the role of militarism in emissions, to building a global Green New Deal, and even holding a People’s Tribunal to put the ineffective UNFCCC on trial.

Emotions at the People’s Summit oscillated from excitement over being together in the streets after nearly two years of confinement due to COVID-19, to dread at the imminent disappearance of the low-lying island states. Participants from Tuvalu and Barbados talked about the impact of the inaction by the Global North as they see their islands disappear, their homes flood, and their present vanish. “Why are you asking us to compromise on our lives?” asked Mitzi Jonelle Tan, a climate activist from the Philippines and spokesperson for Fridays for Future.

The People’s Tribunal called for the disbanding of the UNFCCC and its reconstitution from the ground up as a Climate Forum that does not allow the polluters to make the decisions. This newly constituted Climate Forum would demand meaningful financing for a green transition as well as an end to the plunder of natural resources and to wars of aggression.

Asad Rehman of War on Want spoke to the presidency of COP26 with words that resonated far from Glasgow: “The rich have refused to do their fair share, more empty words on climate finance. You have turned your backs on the poorest who face a crisis of COVID, economic and climate apartheid because of the actions of the richest. It is immoral for the rich to talk about the future of their children and grandchildren when the children of the Global South are dying now.”

– Vijay Prashad is an Indian historian, editor and journalist. He is a writing fellow and chief correspondent at Globetrotter. He is the chief editor of LeftWord Books and the director of Tricontinental: Institute for Social Research. He is a senior non-resident fellow at Chongyang Institute for Financial Studies, Renmin University of China. He has written more than 20 books, includingThe Darker Nations andThe Poorer Nations. His latest book isWashington Bullets, with an introduction by Evo Morales Ayma.

– Zoe Alexandra is a journalist with Peoples Dispatch and reports on people’s movements in Latin America. 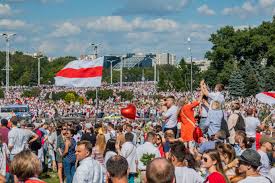 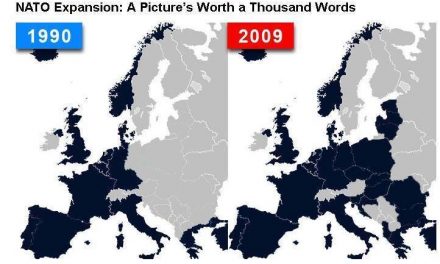 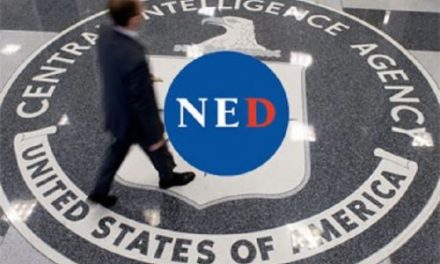