Liliany Obando is a member of the International Relations Commission of the Central Unitaria de Trabajadores (the main trade union peak council in Colombia) and of the Federación Nacional Sindical Unitaria Agropecuaria Fensuagro (the peak council of agrarian unions). During her recent visit to Australia, she spoke with the editor of The Guardian, Anna Pha, about the continuing political turmoil in Colombia and the possibility of the re-election of the right-wing government of President Álvaro Uribe at the national elections next year. Since the interview, the Constitutional Court has approved legislation that will permit Uribe to seek a second term. As Liliany predicted, there has been an upsurge of protest activity throughout Colombia.

Guardian: Could you bring our readers up to date with developments in Colombia with regards to the movement in opposition to the current government of the country — for example, the possibilities and challenges presented by the elections coming up next year?

Liliany Obando: In Colombia, workers are fighting for their rights, for the right to work and for better conditions. It is becoming harder and harder to carry on this task. In theory we do have the right to organize ourselves, to form trade unions — this is recognized under the UN’s Human Rights Charter. But in reality it is extremely difficult because when you follow this course in Colombia you are at risk of being assassinated.

In Colombia we have had a succession of reactionary governments which have implemented the policies of the International Monetary Fund and the World Bank that have, in turn, led to the total loss of people’s right to work and their other economic and social rights. I must first explain that current government of President Álvaro Uribe is one of the jost radical, extreme right governments we’ve ever had. He is from a liberal background but he has been pushed rightward by the Conservative Party. He governs with the support of the two traditional parties of the right. At the moment this government is seeking re-election for another four years.

However, under the current constitution this is not permitted, so the government is setting out to change the constitution to allow this to happen. A lot of effort is being devoted to the study of this constitutional change to affect its outcome. Ultimately, it is the Constitutional Court that will make the decision if Uribe can seek re-election. Everyone is tense as to what the outcome will be. For us — the working class, the popular forces, the left-wing parties that have been oppressed through the years — the re-election of Uribe would mean more blood and more repression. So we have one common cause, one aim: for him not to be re-elected. At the moment there are two main progressive parties that are forming a coalition. One coalition is the Democratic Pole. The coalition includes the M-19 movement and other independent, centre and democratic forces. Even some sectors from the Liberal Party [one of the traditional governing parties in Colombia], which are not supporting Uribe, are participating in this coalition.

There is another coalition, which is called Democratic Alternative that is also comprised of left forces. The Social and Political Front is represented here, as is the Communist Party of Colombia. Those are the two coalitions who are fighting to prevent the re-election of Uribe. Democratic Alternative has a presidential candidate, an ex-judge and former magistrate of the constitutional court, a respected democratic figure in our country, Carlos Gaviria. The Democratic Pole group has another candidate — Antonio Navarro Wolff. He is an ex-member of the M-19 movement that had it origins in a guerrilla war in the past. The idea is that, if the Constitutional Court approves the bid for re-election of the current government, these two coalition groups will decide on just one candidate to oppose Uribe. This is our main objective — to defeat Uribe.

I don’t know if your readers are aware, Uribe is calling for a ceasefire [involving the brutal anti- popular paramilitary groups opposing progressive forces in Colombia] because he knows that, if the Court approves of him standing for re-election, the armed conflict will intensify. For that reason, he’s asking for a ceasefire now and pressing for a peace process with the paramilitaries. For us that’s not a legitimate process. These paramilitaries were created by the state to create internal terrorism, as a tool of state terrorism. From our point of view, this doesn’t ring true — the government is supposedly trying to negotiate with the very same paramilitary organizations it created. Uribe is trying to legitimize the paramilitaries because they will to create their own political parties, which will become "Uribistas" — supporters the President. Obviously, they are going to support his re-election drive.

There is a very widespread awareness among the Colombian people of these issues and it has become polarized with one group trying to get Uribe re-elected and a massive group in opposition to him being re-elected. As far as the trade unions are concerned, we are part of the popular forces opposed to his re-election.

Guardian: Could you tell us what the situation is in Colombia with regards to the application of the various free trade agreements covering the region?

You’re aware that a number of years ago that NAFTA was concluded between the USA, Canada and Mexico. Results have demonstrated that it was a fallacy that it would benefit the people of Canada and Mexico — they were not able to compete against the United States. They talk about the free trade agreement but clearly it is not an agreement among equals since the poor cannot match the rich, cannot compete with the rich. After NAFTA the United States created CAFTA for the countries of Central America. It was a very rushed process to get approval for this accord. It is regrettable that the parties hadn’t assessed the outcome of the NAFTA agreement with respect to Mexico before they put CAFTA agreement on the table to be passed.

The Andean Free Trade Agreement is between governments who care about the sovereignty of their countries. One of the ways the US was able to pressure these countries into agreement was to offer them military support — for example "Plan Colombia". Because they know that countries like Venezuela and Brazil and the armed resistance in Colombia are not going to make it easy for them to implement such economic plans in those countries. These plans are hatched in Washington, not in Colombia. Alongside the economic agreement comes the military aid — weapons which are then used to suppress dissent, suppress the working class. ??They have created news ways to oppress the people. For instance, military specialists from the United States train the military of Colombia, and even operate directly within Colombia. Some mount surveillance programs for which they call in private contractors. They don’t send US citizens; they hire Latin American-looking people to do their dirty work for them. They carry on these various activities not only to dismantle what’s happening in Colombia but also to destabilize the revolution underway in Venezuela. ??This new stage of Plan Colombia they are called the "Patriotic Plan". They have said they are going to eliminate the guerrilla war within 18 months. The term of Uribe Government is nearly over but essentially nothing has happened. This gives you an idea of how strong the resistance is.

Guardian: Will the resistance to Uribe be able to deal with these new onslaughts?

Liliany Obando: In Colombia the more pressure you get the more people organizes. The more we have this dirty war the more the resistance grows, the more the guerrilla war intensifies. If you are a political person, an activist opposing the government and they try and shut you down, what do you do? You go and fight within the guerrilla movement itself.

The Guardian, CP of Australia 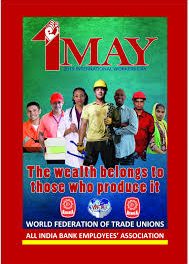 May Day 2019: The Wealth Belongs to Those Who Produce It!