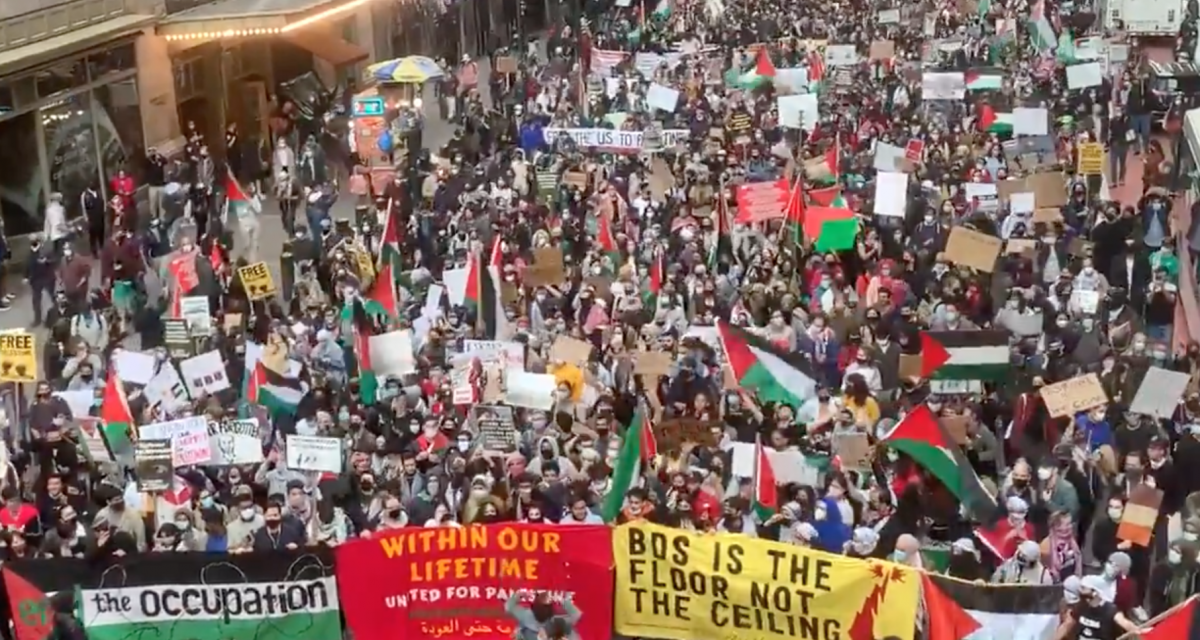 While some national labor groups remain silent, union locals across the country are speaking out to defend Palestinians from Israeli aggression.

By Jeff Schuhrke, In These Times

While a ceasefire announced on May 20 has helped stem some of the deadliest attacks by Israel in the latest round of aggression, Palestinians are still enduring state violence at the hands of the right-wing Israeli government. In response, Palestinian trade unions have been repeating longstanding calls for the international labor movement to join them in their struggle for freedom — including by supporting the Boycott, Divestment, and Sanctions (BDS) campaign, which aims to put economic and diplomatic pressure on Israel to end the occupation.

Over the past two weeks, several unions in the United States have responded to these calls with an unprecedented outpouring of support for Palestinians.

On May 13, Roofers Local 36 in Los Angeles issued a statement that condemns ​“human rights violations perpetrated by the Israeli state against the people of Palestine” and calls on President Biden to ​“immediately halt all economic and military assistance to Israel.”

“Imperialist aggression, ethnic cleansing and genocide are the enemy of all working people and organized labor must step forward to defend the democratic rights of oppressed peoples everywhere,” the statement says.

“Many of our members are migrants from oppressed nations, often without documentation. We’re a multinational and multicultural workforce who bond together to improve our conditions,” Cliff Smith, business manager for Roofers Local 36, told In These Times. ​“It’s natural for us to identify with the struggles of oppressed and working people in Palestine or anywhere else.”

After the Israel Defense Forces intentionally bombed a Gaza tower housing the offices of the Associated Press and Al Jazeera on May 15, the NewsGuild-CWA — the union of 24,000 journalists across North America—called the bombing ​“a blatant attack on press freedom that was clearly intended to prevent independent reporting on the [Israeli] government’s actions.”

The 8,000-member Teamsters Local 804 in New York City, comprised primarily of UPS drivers, tweeted the hashtags #SaveSheikhJarrah and #FreePalestine along with the message: ​“Solidarity with oppressed people across the world.”

At Google, members of the recently formed Alphabet Workers Union-CWA were involved in drafting a petition circulated by Jewish employees last week calling on the company to support Palestine and reject equating opposition to Zionism with antisemitism.

Although many U.S. unions have enthusiastically answered the call for Palestinian solidarity, the national leadership of the AFL-CIO has remained silent.

Alongside the U.S. government, the AFL-CIO has for decades been one of Israel’s staunchest defenders and a generous financial supporter. Many U.S. labor leaders — including AFL-CIO president Richard Trumka, Retail, Wholesale and Department Store Union president Stuart Appelbaum, and American Federation of Teachers (AFT) president Randi Weingarten— openly oppose BDS, even as a growing chorus of human rights groups brands Israel as an ​“apartheid state.”

“The U.S. labor movement must answer the call of our brothers and sisters in Palestinian unions — and join the rest of the international community — in refusing to give cover to Israeli apartheid,” said Yasemin Zahra, chair of Labor Against Racism and War (LARW), a network of unions and other labor organizations that builds international working-class solidarity to oppose U.S. militarism both at home and abroad.

Last week, LARW called an emergency meeting to discuss labor solidarity with Palestine, receiving over 350 RSVPs from union members across the United States in only 24 hours, Zahra said. In the past week, the group has mobilized hundreds of unionists to send a letter to Trumka and the AFL-CIO’s Executive Council demanding they break their silence and stand with the Palestinian people.

The AFL-CIO did not immediately respond to a request for comment.

Meanwhile, on May 15, the national officers of the United Electrical, Radio, and Machine Workers (UE) — which is not an AFL-CIO affiliate — released a statement of solidarity with Palestine. The union endorsed BDS in 2015.

“If U.S. unions are seen as tools of the U.S. government when U.S. foreign policy hurts working people abroad,” the UE leaders wrote, ​“how can we expect workers and unions in other parts of the world to stand in solidarity with our struggles?”

Many of the AFL-CIO’s closest international allies have expressed sympathy and support for Palestinians in recent weeks, including the Canadian Labour Congress, the Trades Union Congress (in the UK), the Irish Congress of Trade Unions and the International Trade Union Confederation.

Some unions abroad have gone beyond statements and taken bold action. A dockworkers union in the Italian port city of Livorno refused to load weapons bound for Israel, while a South African dockworkers union similarly boycotted an Israeli cargo ship in the port of Durban.

In the English city of Leicester, firefighters refused calls to help remove pro-Palestine activists protesting on the roof of a drone factory, while their union said they ​“stand in support of Palestinian solidarity and the right to protest.”

The most powerful collective labor action came from Palestinians themselves when they staged a massive general strike on May 18 across all of historic Palestine. The daylong work stoppage illustrated Israel’s dependence on Palestinian workers, as construction, public transport and municipal garbage collection around the country were brought to a halt.

One of the most significant displays of U.S. labor solidarity with Palestine in recent weeks came on May 19, when the general assembly of United Educators of San Francisco, Local 61 of the AFT, voted to approve a resolution endorsing BDS — making it the first K‑12 teacher union in the United States to do so.

A similar BDS resolution is advancing through the elected leadership of United Teachers Los Angeles (UTLA), the second largest AFT local in the nation. According to UTLA organizer Jollene Levid, the elected representatives of over 100 East Los Angeles schools approved the resolution last Wednesday. The resolution still must be approved by two more bodies of UTLA leadership before the local formally adopts it.

At the same time, multiple AFT-affiliated graduate worker unions — including the Graduate Labor Organization at Brown University and the Georgetown Alliance of Graduate Employees (GAGE) — put out statements of solidarity with Palestine over the past two weeks. GAGE members also joined a protest outside the Israeli embassy on May 18.

These developments within the AFT are especially significant because the union’s national president, Randi Weingarten, is one of the most pro-Israel, anti-BDS figures in the U.S. labor movement. Under her leadership, the AFT’s national headquarters has invested $200,000 in State of Israel bonds.

Recently, members of the AFT-affiliated Graduate Employees Organization (GEO) at the University of Illinois at Urbana-Champaign reiterated their 2018 call for top officials of both the AFT and Illinois Federation of Teachers to ​“condemn Israel’s murderous aggression and blatant human rights abuses against Palestinians.”

“We are saddened and disappointed in the hostility that AFT leaders such as Randi Weingarten have expressed to the internationally-respected and non-violent tactic of BDS. Such leaders are out of touch and out of step with the rank and file of our union,” the GEO said. ​“A labor movement that does not fight for justice against the bullies of the world is no labor movement at all.”

Late last week, community college instructors with AFT Local 1789 in Seattle began circulating a petition—which can be signed by all rank-and-file AFT members — demanding the union’s national leadership ​“issue a public statement condemning the continued oppression of Palestinians by the Israeli state.”

In a May 26 statement on her Facebook page, Weingarten expressed support for ​“those in Israel, the West Bank and Gaza who are dedicated to secure self determination, coexistence, shared society, safety and human rights.”

“I condemn Hamas in the strongest terms,” she added. ​“I mourn the civilians killed on both sides. We can and must do better.”

Education International — the global union federation representing teacher unions around the world—issued a statement Wednesday calling on both Israel and Hamas to renounce violence and engage in direct negotiations. The statement was introduced by Weingarten, AFT press secretary Andrew Crook said.

“U.S. labor institutions traditionally and currently have played a role in legitimizing Israel. We need to hold those U.S. labor institutions accountable for that because Israel is committing war crimes and crimes against humanity,” said Suzanne Adely, co-director of the Food Chain Workers Alliance and president-elect of the National Lawyers Guild.

Adely, who previously worked for the UAW, is an organizer with Labor for Palestine, Al-Awda New York and the US Palestinian Community Network. She told In These Times that she has personally seen incidents of union ​“gatekeepers” actively trying to ​“keep the Palestinian question outside of labor spaces,” pointing to the example of UAW members in multiple locals voting to endorse BDS between 2014 and 2016, only to have the union’s International Executive Board undemocratically ​“nullify” those measures.

“It’s been my experience that when we actually can bring conversations about Palestine into spaces where workers are, the workers are very sympathetic. But the problem is the gatekeepers have worked to keep those conversations out,” Adely explained.

“I always tell workers, whatever issues they care about are union issues,” Zahra said. ​“The members are the union. The union can be a machine to serve humanity, an instrument for building an equal society for all workers.”

“We must clearly connect the dots with our members about why the Palestinian struggle for freedom is also our own,” Zahra continued, noting that while millions of working-class people in the United States lack decent housing, healthcare and education, half of the U.S. federal discretionary budget goes to the Pentagon each year — with an annual $3.8 billion in military aid going to Israel.

She added that passing resolutions and issuing solidarity statements with Palestine ​“are great first steps,” but unions should ultimately aim to divest from Israeli bonds and help end U.S. military assistance to Israel.

“For Palestine and for other causes, labor has a lot of power,” said Adely. ​“We need to learn to utilize it — particularly to hold labor leaders accountable.”