The Foreign Ministry of Cuba has withdrawn its diplomatic staff from Libya, where foreign intervention and NATO military aggression has exacerbated the conflict and prevented the Libyan people from advancing toward a peaceful negotiated solution, in full exercise of their self-determination.

The Republic of Cuba does not recognize the Transitional National Council, nor any provisional authority, and will only recognize a government established in Libya in a legitimate manner, without foreign intervention, through the free, sovereign, and common will of the brother people of Libya.

Ambassador VÃ­ctor RamÃ­rez PeÃ±a and First Secretary Armando PÃ©rez SuÃ¡rez, accredited in Tripoli, have maintained impeccable conduct, strictly observing their diplomatic status, have endured risks, and have stood by the Libyan people in this tragic situation.

They have directly witnessed the NATO bombings of civilian targets and deaths of innocent people. Under the grotesque pretense of protecting civilians, the NATO has murdered thousands of them, disregarded the constructive initiatives of the African Union and other countries, and even violated the questionable resolutions imposed at the Security Council, in particular by its attacks on civilian targets, by its financing and arming of one side, and by its deployment of diplomatic and operational personnel on the ground.

The United Nations has ignored the clamor of international public opinion in defense of peace and ended up becoming complicit in a war of conquest. The facts confirm the early warnings of Commander in Chief Fidel Castro Ruz and the timely condemnations issued by Cuba at the UN. Now the world can see better what purpose the so-called "Responsibility to Protect" serves in the hands of the powerful.

Cuba declares that nothing can justify the murder of innocent people. The Foreign Ministry demands the immediate end to NATO bombings, which continue to claim lives, and reiterates the urgent need to permit the Libyan people to find a peaceful negotiated solution, without foreign intervention, in exercise of their inalienable right to independence and self-determination, to sovereignty over their national resources, and to the territorial integrity of that brother nation.

Cuba condemns the conduct of the NATO, which is aimed at creating similar conditions for intervention in Syria, and demands the end to foreign intervention in that Arab country. Cuba calls upon the international community to prevent a new war, urges the United Nations to abide by its duty to safeguard peace, and supports the right of the Syrian people to full sovereignty and self-determination. Havana, 3 September 2011

Here, Everything is Discussed with Everyone 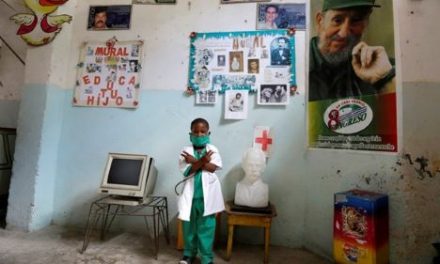