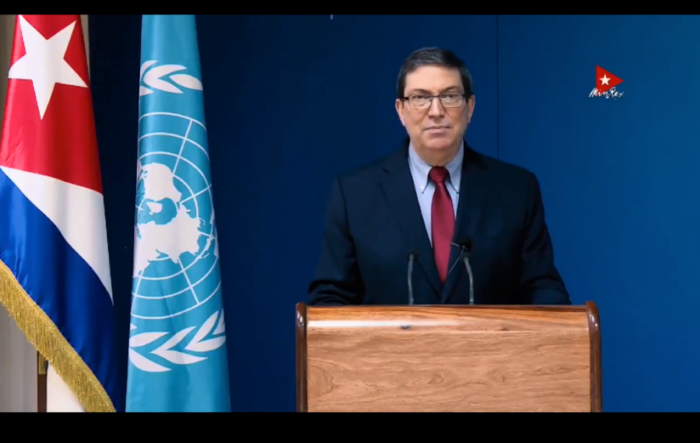 The COVID-19 pandemic has exacerbated the grave problems and colossal challenges human kind was already faced with and exposed new threats, including the frailty of health care systems.  The promotion, protection and respect of the right to health are particularly relevant in the current context.

In Cuba, the existence of a free-of-charge, high-quality and universal-coverage health care system guarantees the right to health of all Cubans and has allowed us to tackle the pandemic with positive results.    Nowadays we have four vaccine candidates against COVID-19, each at a different phase of clinical trials, which are the result of the development of Cuban science and the hard work of our scientists.  We expect to be able to immunize the entire Cuban population this year.

The pandemic has triggered a serious economic and social crisis.  Inequalities, hunger and discrimination are growing exponentially in a world that is already burdened by an unjust and antidemocratic international order and the application of ruthless neoliberalism, which has a stronger impact on the most vulnerable and turns their most basic rights into a wild fancy.

We have seen the wealthiest nations of the West trying to hoard the means to fight the disease.  The World Health Organization reported in January that only ten countries had bought 95% of the COVID-19 vaccines produced in the planet.

Favoring petty interests over the overall wellbeing will lead to greater suffering and more deaths, even in industrialized countries.  We urgently need to internationalize cooperation.  It is imperative to fight for the establishment of a just, democratic and equitable international order.

From the outset, Cuba, in the practice of solidarity, shared its experience in the management of epidemics and has sent 56 medical teams of the Henry Reeve International Brigade to 40 nations and territories.

The politically-driven fallacious campaigns against Cuban medical cooperation will never be echoed by the nations that will always count on the solidarity, altruism and humanism of Cuban health professionals.

We have continued making progress in the construction of an independent, sovereign, socialist, democratic, prosperous and sustainable nation, on the basis of our people’s demonstrated resistance and creativity, in spite of the brutal economic, commercial and financial blockade imposed by the US, which has been hardened to extreme levels by the outgoing administration of Donald Trump.   The most recent example of this hardening was Cuba’s inclusion in the unilateral and spurious list of State Sponsors of Terrorism.

While some try to distort our reality and subvert constitutional order, we steadily move forward ̶ and will keep doing so in the future ̶ on the path of improving our socioeconomic development model, and strengthening the legal and institutional framework for the protection and promotion of all human rights for all, under the guidance of the new Constitution of the Republic of Cuba.

In November 2019 we put in place the National Program against Racism and Racial Discrimination to fight and eliminate any vestige of such attitudes.  This program is coordinated by a National Commission led by the President of the Republic of Cuba.

In November 2020, the National Plan for the Advancement of Women was also introduced as a government program. Its goal is to continue promoting the advancement of Cuban women, beyond the remarkable achievements of our country in the area of gender equality.

Cuba has given irrefutable proof of its firm commitment to the promotion and protection of the human rights of its people and other peoples in the world.  The manipulation of this noble cause at the service of twisted political interests is unacceptable.   In the face of the attempts to defame our nation and obscure its undisputed achievements concerning human rights, we will defend our truth and will never relinquish our sovereignty and independence.

As a member of the Human Rights Council, we will raise our own distinct voice in defense of a respectful and constructive dialogue, as opposed to punitive approaches, political manipulation and selectivity.   We will work on the strengthening of international solidarity and cooperation for an effective promotion and protection of all human rights for all.  We will also keep honoring our commitments to cooperate with all universally applied human rights mechanisms.

The peoples of the world demand facts, not words; they claim solutions, not promises.  They deserve a decent life and a better world, which is possible.  We will not make progress unless we put our differences aside in favor of a global joint response to the challenges posed to us.

Two Messages: To Fidel & Raul, and to the Cuban People

Amnesty International Report: The Case of the Cuban Five